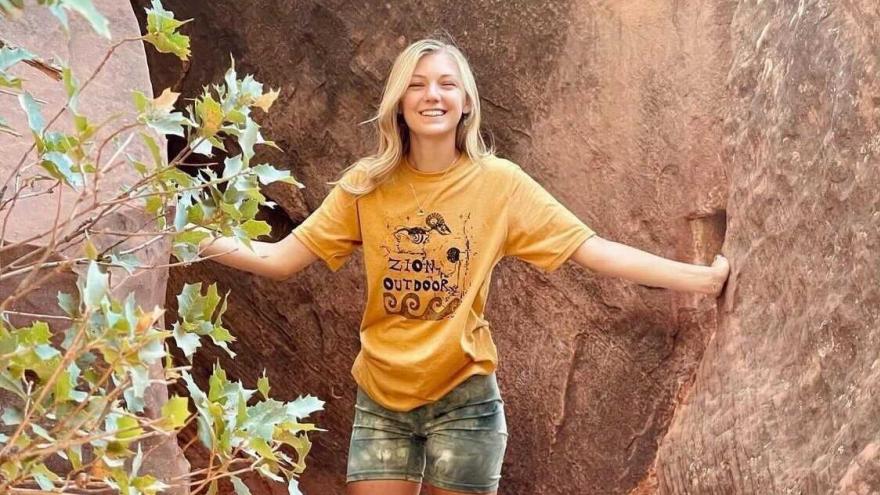 Human remains discovered in Teton County, Wyoming, on Sunday are "consistent with the description of" missing 22-year-old Gabby Petito, FBI officials said in a news conference.

(CNN) -- The FBI executed a search warrant at the Florida home of Gabby Petito's fiancé Brian Laundrie on Monday, a day after investigators across the country found what they believe to be her remains.

On Monday morning, FBI investigators surrounded and entered Laundrie's home in North Port as part of a "court-authorized search warrant" related to the Petito case.

The warrant comes as investigators are still searching for Laundrie, who returned home to Florida without Petito earlier this month, declined to talk to investigators and then went missing last week. The search for him had centered on a nature reserve near his home, but North Port Police said Monday they have shifted their focus.

"At this time, we currently believe we have exhausted all avenues in searching the grounds there," North Port Police spokesperson Josh Taylor said.

On Sunday, human remains believed to be of Petito's were found in Wyoming, a tragic discovery that could nonetheless help answer questions about what happened to the 22-year-old.

Petito and Laundrie had been road-tripping in a white van through the American West this summer, all while regularly posting photos and stories to their social media pages with the hashtag #vanlife.

Those posts abruptly stopped in late August, though. Laundrie returned to his home in North Port, Florida, with their van but without Petito on September 1, according to police. Petito's family, unable to get in touch with her, reported her missing on September 11.

In the days since, her story has become a national obsession for many, spurring digital detectives to comb through their online trail to try to solve the case. The story has also further highlighted the tens of thousands of missing persons stories that do not garner such intense interest; there were nearly 90,000 active missing person cases as of the end of 2020, according to the National Crime Information Center.

The discovery of human remains on Sunday came as authorities conducted a search around the Spread Creek Dispersed Camping Area in Bridger-Teton National Forest on the eastern edge of Grand Teton National Park, officials said. Dr. Brent Blue, the coroner of Teton County, Wyoming, told CNN an autopsy is scheduled for Tuesday.

Petito's family has been notified of the discovery, though a full forensic identification will be needed to confirm it is her, said Charles Jones, FBI Denver's supervisory senior resident agent in Wyoming. Authorities also need to identify the cause of death, he said.

Petito's father, Joseph Petito, tweeted a picture of her Sunday evening, saying, "She touched the world."

Richard Stafford, an attorney representing Joseph Petito and her mother, Nicole Schmidt, issued a statement obtained by CNN affiliate WABC asking that the family be given space.

Laundrie family attorney Steven Bertolino called the discovery of remains in Wyoming "heartbreaking," adding: "The Laundrie family prays for Gabby and her family."

"Gabby was a fun and loving influence to 'the boys' as she always referred to them. We will cherish the time we spent with her," Cassie Laundrie said in the statement.

The search for Laundrie

Their home was searched Friday evening after Laundrie's family told police they had not seen him for days. He left home with his backpack Tuesday and told them he was going to a local nature reserve, Taylor, the police spokesperson, said Saturday.

Over the weekend, federal and local authorities conducted their search for Laundrie in the Carlton Reserve in Sarasota County, police said. The search was suspended Sunday evening and there was "nothing to report," North Port Police said on Twitter.

The search effort included the use of drones and bloodhounds who used articles of Laundrie's clothing taken from his home to get his scent, Taylor said in a news conference at the scene of the search Saturday. Police initially focused their search on a nearby park which spans about 200 acres before expanding to the rest of the reserve.

Laundrie is not wanted for a crime, officials have said.

Petito and Laundrie were on a road trip to national parks

Petito was believed to have been in Grand Teton National Park in Wyoming when her family was last in contact with her, North Port police said.

She had been excited to share her journey with her family and others on social media, he said.

"She maintained regular contact with her family members during her travels, however that communication abruptly stopped around the end of August," the police chief added.

Police had an encounter with the couple in Moab, Utah, on August 12, where officers described them as having "engaged in some sort of altercation."

Although the two are described as getting into a physical fight following an argument, "both the male and female reported they are in love and engaged to be married and desperately didn't wish to see anyone charged with a crime," a report from officer Eric Pratt said.

At the suggestion by police, the couple separated for the night, the report said, which described Petito as "confused and emotional."

"After evaluating the totality of the circumstances, I do not believe the situation escalated to the level of a domestic assault as much as that of a mental health crisis," officer Daniel Robbins wrote in the police report. No charges were filed.

On August 24, Petito FaceTimed with her mother and told her she was leaving Utah and heading to the Teton range in Wyoming, Stafford said.

Over the next three days, Petito and her mother exchanged texts, he said. They received one last message on August 30 that read, "No service in Yosemite," but her family doubts she wrote it, Stafford said.