Awaiting orders to get out ahead of blast in New Orleans 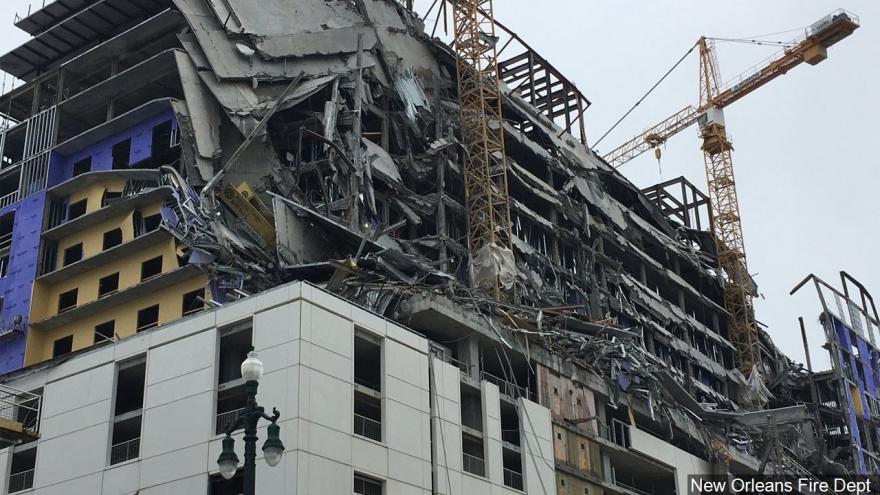 NEW ORLEANS (AP) — People living and working near a corner of New Orleans' historic French Quarter were being told they should prepare to evacuate for several hours Saturday — once workers complete preparations for controlled explosions they hope will bring down two giant, damaged construction cranes without damaging nearby buildings.

The towers — one around 270 feet (82 meters) high, the other about 300 feet (91 meters) — weigh tons and have loomed over the wreckage of a partially collapsed building for a week. The Hard Rock Hotel under construction at the corner of Canal and Rampart Streets partially collapsed last Saturday, killing three workers. Two bodies remain in the unstable wreckage and Mayor LaToya Cantrell said recovering the remains would be a top priority once the area was rendered safe.

If the plans succeed, the towers will drop vertically, sparing neighboring structures that include the Saenger Theatre and the New Orleans Athletic Club, both built in the 1920s. An existing evacuation area was to be expanded as the demolition hour approached — most likely some time Saturday afternoon. Officials said shelter would be provided for anyone needing it as a result. In a still-wider area, traffic was to be prohibited and people would be ordered to stay indoors until the demolition is complete and an all-clear is given.

"If you are in line of sight of this you are too close," said city Homeland Security director Collin Arnold.

Experts, including engineers who worked on demolitions following the 9/11 terrorist attacks, were called in to try to come up with a plan to clear the site and prevent further injury and damage before the cranes fell on their own. Heightening the urgency was the approach of Tropical Storm Nestor, which formed in the Gulf of Mexico on Friday. The storm's forecast track was well east of the city but officials worried wind from its outer bands could add to the threat of an uncontrolled fall of the cranes.

On Thursday, officials announced plans to attach explosives to the structures. Once planned for Friday, the demolition was pushed back to Saturday. Intermittent wind and rain hampered the preparations as workers in buckets were suspended high over the disaster site.

"They will work as long as it's safe," Fire Chief Tim McConnell said. "The objective is to get this down as quick as possible."

The cause of the collapse remains unknown. The Occupational Health and Safety Administration is investigating and, Cantrell and McConnell said, evidence gathering began soon after the collapse.

Lawsuits are already being filed on behalf of some of the more than 20 people injured against the project's owners and contractors.