Babe Ruth's jersey sold at auction for a record-breaking $5.6 million 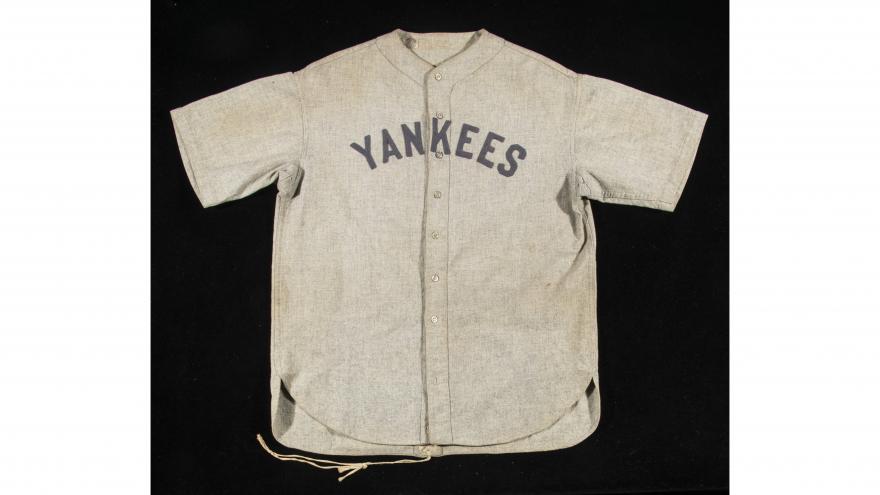 (CNN) -- It's been more than a century since Babe Ruth started his baseball career, but the Bambino is still breaking records.

A Babe Ruth New York Yankees jersey from 1928-1930 fetched $5.64 million at auction Saturday, making it the most expensive piece of sports memorabilia ever sold, according to the auction house. The previous record was a 1920 Babe Ruth jersey that went for $4.4 million.

The record-breaking jersey was part of a collection of artifacts related to "The Sultan of Swat," as Ruth was also known, sold by Hunt Auctions at Yankee Stadium. The auction house said in a statement that it partnered with the baseball legend's family and had select additions from "elite third-party collections" for the massive display.

"Babe's collection has remained largely unknown to the general public and we felt it was time to bring these amazing pieces of his life to light," Linda Ruth Tosetti, Ruth's granddaughter, said in a news release.

The auction house certainly hit a home run with this collection, though it wasn't a huge shock.

"While the record-setting prices attained today are certainly astonishing, I am not surprised at all given the incredible materials and the mythical status the Babe holds in the history of this country," David Hunt, president of Hunt Auctions, said in a news release.

Ruth's legendary baseball career spanned 22 seasons and included 714 home runs and four World Series titles, according to the National Baseball Hall of Fame. While he's known for playing for the Yankees, Ruth also spent time with the Boston Red Sox and Boston Braves.

In 1936, he became one of the five inaugural members elected to the Baseball Hall of Fame.