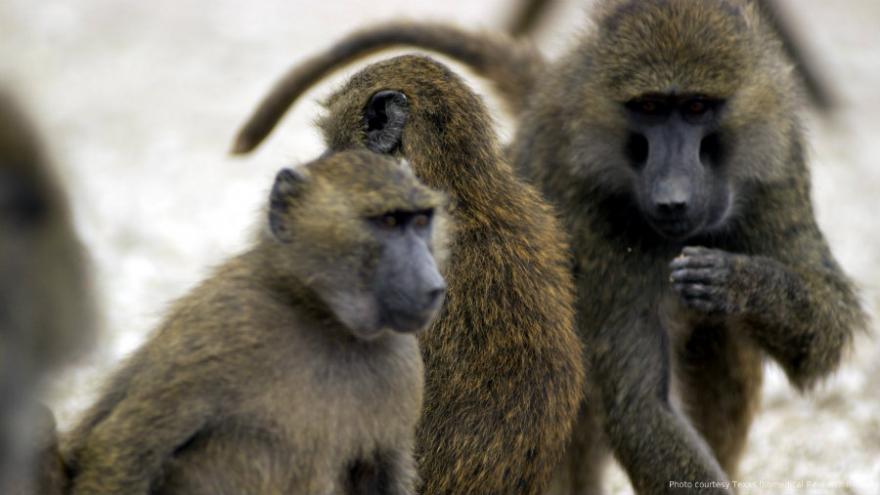 (CNN) -- Four baboons, having clearly read too much dystopian fiction, escaped a biomedical research lab in San Antonio by climbing a 55-gallon barrel and jumping out of their enclosure.

The Texas Biomedical Research Institute described the escape as an "animal perimeter breach incident," which, in all fairness to the primates, sounds pretty dystopian-fiction-y, so maybe they were onto something.

According to a news release from the TBRI, four baboons upended a large blue barrel (provided to the baboons as an "enrichment tool") and used it to climb out of their circular, open-air housing structure on Saturday.

Three were able to breach said perimeter; the fourth apparently seemed to think better of the idea and returned.

One of them managed to make it past a tree line and onto a nearby street, where it dazzled residents with its iconoclasm and free spirit.

Just kidding, it freaked people out. According to CNN affiliate KSAT, onlookers took photos and videos of the baboon as it ran along a road.

Within 20 to 30 minutes, an animal care team from the Southwest National Primate Research Center had rounded up the rogue animals and returned them to their enclosure.

The biomedical research institute says the animals were never a medical danger to the public, and the care and capture teams that dealt with the situation wore protective gear less for their own sake than for the baboons'.

"The animal capture team, per protocol, was wearing personal protective equipment for the safety of the animals, as they are susceptible to human illnesses," the release read. "These animals were not infected, as they were not on an active study nor used in infectious disease research."

"This was truly a unique incident," Lisa Cruz, assistant vice president for communications, remarked in the statement. "We have been caring for research baboons for more than 50 years. We have nearly 1100 baboons on the property that date back eight generations. Baboons, as with all our animals, are critical to biomedical research."

The institute says the three baboons and their turncloak co-conspirator are all "doing well."

The blue barrels they used to escape, however, have been removed from the enclosure and will be evaluated.

Perhaps they enriched too much.