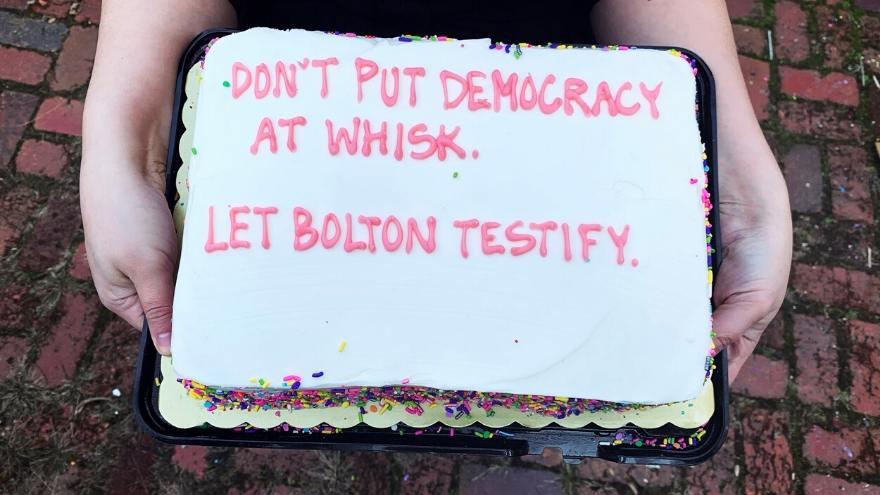 (CNN) -- An activist and the owners of a New York city bakery teamed up to find a sweet way to pressure Republican senators to subpoena testimony from President Donald Trump's former national security adviser, John Bolton: With cake.

Colin Bishopp, the executive director for the environmental nonprofit PACE Foundation, worked with Brooklyn-based Butter & Scotch to send what they're calling "impeachment cakes" to the offices of 53 GOP senators.

So far, cakes have only been delivered to the offices of Republican Sens. Rob Portman of Ohio and Cindy Hyde-Smith of Mississippi. Texas Republican Sen. Ted Cruz's office turned his cake away.

Bishopp raised over $7,007 for the project on GoFundMe, telling CNN he reached his initial funding goal in only three hours.

"We tried to come up with an example of something that everyone likes, something that every senator would have to agree is fundamentally good. All we could come up with is cake," Bishopp said. "Everyone loves cake! We figured that if Republican senators are going to ignore the facts being delivered to them by every other medium, why not try to reach them with cake?"

Bishopp said that Butter & Scotch was the "obvious choice" as they not only make delicious cakes but are also "willing to stick their neck out for things they believe in."

"Logistically, it was going to be a nightmare, but I wanted to find a way to do it because I thought it was such a fun project and an awesome way to protest," Butter & Scotch co-owner Keavy Landreth told CNN.

Transporting 53 sheet cakes from Brooklyn to Washington is no easy feat, so instead of baking all 53 cakes, the bakers decided it would be much easier to locally buy 53 sheet cakes and to decorate and write on all of them.

Butter & Scotch general manager Stephanie Gallardo packed 50 pounds of frosting and sprinkles into a suitcase and took a train down to Washington on Tuesday. The next day, she spent about six hours writing cheeky and pun-filled messages on the cakes.

The cakes had messages such as: "This trial is half-baked without witnesses," "Don't go baking my heart" and "The truth is delicious."

While the messages on each of the cakes varied from one to the next, there was one clear message at the end of nearly every cake: "Let Bolton testify."

The Senate Sergeant at Arms' office did not immediately respond to a request for comment from CNN.

"What we'd like to ask each Republican senator to do is step outside of the D.C. echo chamber for a minute, have a piece of cake, and remember what's good," Bishopp said. "Checks and balances are good. Fair trials are good. Cake is good. Our nation's forebears knew these things, and each Republican senator ought to know them too. The Republicans who refused to receive a cake today seem to need a reminder."