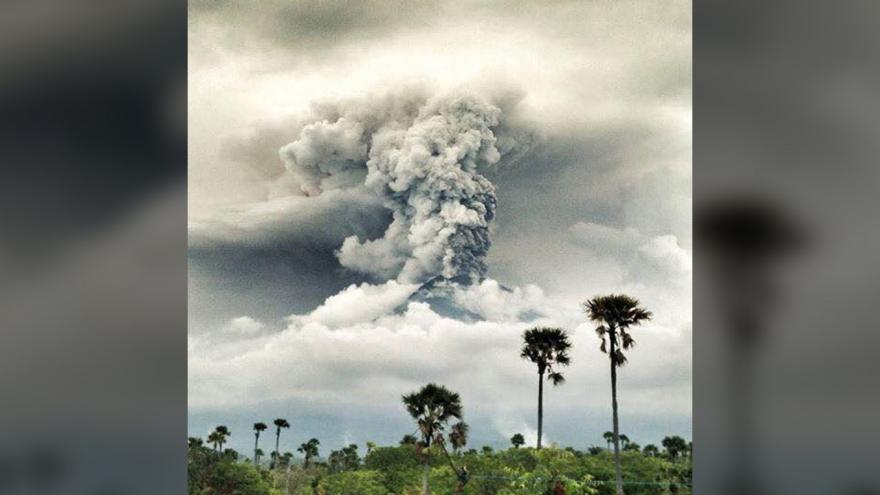 (CNN) -- Bali residents living next to a smoldering volcano are being urged to evacuate as soon as possible, amid warnings from emergency agencies of another larger eruption.

Almost 30,000 people have already left the area around Mount Agung since it began erupting on Saturday, spewing clouds of ash reaching as high as 9,100 meters (at least 5.6 miles).

Indonesia's National Board for Disaster Management (BNPB) said on social media up to 100,000 locals living in the danger zone needed to evacuate urgently but rescuers were facing resistance.

"Not all villagers in the dangerous radius are willing to evacuate. Until now there are still many people who remain in their houses," the disaster agency said, adding some were staying behind to protect gardens and livestock.

Clouds of smoke continued to pour from the crater Tuesday morning, with authorities remaining on the highest alert level possible in anticipation of another, larger eruption.

Spokesman for the BNPB Sutopo Purwo Nugroho said there was growing seismic activity around Mount Agung, indicated another eruption could occur soon.

Over Monday night,"rays of fire" were increasingly observed in the volcano's crater, according to a Facebook post by the BNPB, while another post on Tuesday warned of "increasing volcanic activity."

"Mount Agung eruption keeps going ... The possibility that the bigger eruption might happen (is getting) closer. However there is no clear information on how big the intensity (would be). It is nearly impossible to estimate," the disaster agency said.

The BNPB maintained a Level 4 alert on Tuesday, mandating no public activities within 10 kilometers of the peak.

On Monday evening, a red level aviation warning was reissued by Indonesia's Center for Volcanology and Geological Hazard Mitigation due to the ongoing eruption.

All flights out of the airport are grounded until 7 a.m. local time Wednesday. More than 50,000 domestic and international passengers have already been stranded by the eruption.

The BNPB said there would be a re-evaluation of the decision to keep airports closed every six hours.

Bali is a popular tourist destination in eastern Indonesia which sees more than a million visitors from Australia every year, as well as hundreds of thousands from around the region, including China.

The main tourist centers are some distance from Mount Agung. Bali's artistic hub, the small town of Ubud, is about 50 kilometers (31 miles) southwest of the volcano, and Denpasar (where the airport is located) and the popular Kuta Beach are more than 63 kilometers (40 miles) away.

Tourists spoke to CNN of the travel chaos caused by the volcano, with some unable to leave Bali for three days.

Ash began spewing from Agung after it erupted three times on Saturday, beginning at around 5.30 p.m. local time. More eruptions followed on Sunday, with a "medium-pressure" event in the early evening.