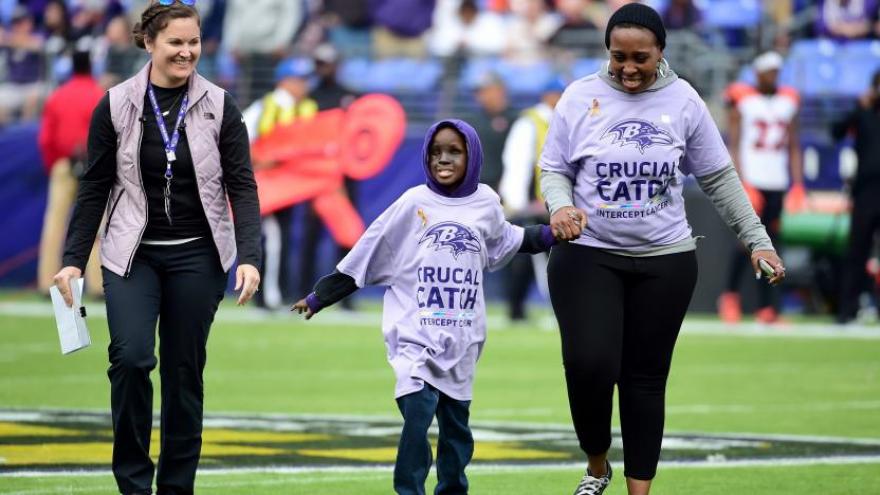 Mo Gaba (center) walks off the field after the coin toss prior to a game between the Cincinnati Bengals and Baltimore Ravens at M&T Bank Stadium on October 13, 2019 in Baltimore, Maryland.

(CNN) -- Mo Gaba, a young Baltimore Ravens superfan who was blind and battled cancer, has died, according to tweets from Maryland Gov. Larry Hogan and the Baltimore Ravens.

"Absolutely heartbroken by the passing of Mo Gaba, a bright light who brought joy to all who knew him and hope to everyone who heard his story. Our prayers go out to his family and loved ones," Hogan said on Twitter.

Gaba, who battled cancer four times, made headlines last year when he became the first person to announce an NFL draft pick using a draft card written in Braille.

The teen, who was a regular caller to Baltimore sports radio stations, was invited to announce the pick after calling in to sports station 98 Rock in April 2019 to discuss the draft.

Ravens head coach John Harbaugh was also on the line and invited Gaba to announce the team's fourth-round draft pick later that week. Harbaugh promised to roll out the red carpet for the superfan.

"What? Really? I've never done that before," Gaba said with a big smile on his face. "I would like to do that, yeah."

He announced the Baltimore Ravens' selection of Oklahoma Sooners guard Ben Powers with the No. 123 overall pick.

The Ravens posted a tribute video to Gaba on Tuesday and tweeted about his death.

"Thank you for everything, Mo. Rest In Peace," the team wrote on Twitter, alongside a graphic made of multiple photos of Gaba and team members.

The Baltimore Orioles also tweeted about Gaba's death, writing, "Thank you, Mo, for sharing your joy and contagious laughter with the team and all the countless memories we will never forget."