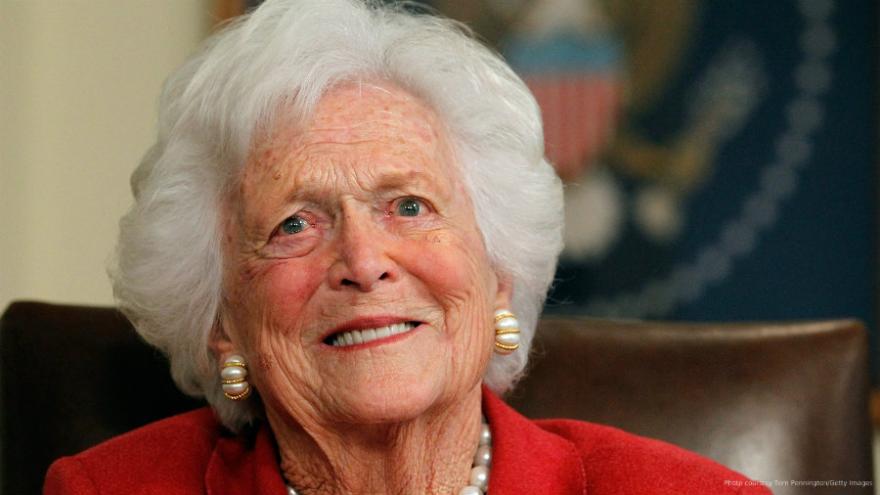 (CNN) -- Barbara Bush, the matriarch of a Republican political dynasty and a first lady who elevated the cause of literacy, died Tuesday, according to a statement from her husband's office. She was 92.

Only the second woman in American history to have had a husband and a son elected President (Abigail Adams was the first), Bush was seen as a plainspoken public figure who was instantly recognizable with her signature white hair and pearl necklaces and earrings. She became a major political figure as her husband, George H.W. Bush, rose to become vice president and president. After they left the White House, she was a potent spokeswoman for two of her sons -- George W. and Jeb -- as they campaigned for office.

The mother of six children -- one of whom, a daughter, Robin, died as a child from leukemia -- Barbara Bush raised her fast-growing family in the 1950s and '60s amid the post-war boom of Texas and the whirl of politics that consumed her husband.

She was at his side during his nearly 30-year political career. He was a US representative for Texas, UN ambassador, Republican Party chairman, ambassador to China and CIA director. He then became Ronald Reagan's vice president for two terms and won election to the White House in 1988. He left office in 1993 after losing a re-election bid to Bill Clinton.

Quick-witted with a sharp tongue, the feisty Barbara Bush was a fierce defender of her husband and an astute adviser.

As first lady, her principal persona as a devoted wife and mother contrasted in many ways with her peer and predecessor, Nancy Reagan, and her younger successor, Hillary Clinton, both of whom were seen as more intimately involved in their husbands' presidencies.

Still, Barbara Bush promoted women's rights, and her strong personal views sometimes surfaced publicly and raised eyebrows -- especially when they clashed with Republican Party politics. For instance, she once said as her husband ran for president that abortion should not be politicized.

She also was not shy about the possibility of a female president, disarming a Wellesley College audience at a 1990 appearance protested by some on campus who questioned her credentials to address female graduates aiming for the workplace.

"Somewhere out in this audience may even be someone who will one day follow my footsteps and preside over the White House as the president's spouse.

Barbara Pierce was born June 8, 1925, in New York and raised in the upscale town of Rye. She attended a prestigious boarding school in South Carolina, where she met her future husband at a school dance when she was only 16 and he was a year older. A year and a half and countless love letters later, the two were engaged just before George Bush enlisted in the Navy and went off to fight in World War II.

Bush, who was the youngest fighter pilot in the Navy at the time, would return home a war hero, after being shot down by the Japanese. He had flown 58 combat missions and received the Distinguished Flying Cross for bravery. By that time, Barbara had dropped out of Smith College and the pair were married in January 1945.

They raised their family mainly in Texas, where George H.W. Bush, the son of a US senator, was in the oil business and later entered politics.

Barbara Bush's dedication to keeping order at home earned her the nickname "the enforcer."

"We were rambunctious a lot, pretty independent-minded kids, and, you know, she had her hands. Dad, of course, was available, but he was a busy guy. And he was on the road a lot in his businesses and obviously on the road a lot when he was campaigning. And so Mother was there to maintain order and discipline. She was the sergeant," George W. Bush told CNN in 2016.

With her husband as vice president in the 1980s, Bush adopted literacy as a cause, raising awareness and eventually launching the nonprofit Barbara Bush Foundation for Family Literacy. After George H.W. Bush's presidency, he and Barbara raised more than $1 billion for literacy and cancer charities.

"I chose literacy because I honestly believe that if more people could read, write, and comprehend, we would be that much closer to solving so many of the problems that plague our nation and our society," she said.

A writer, her books include an autobiography and one about post-White House life. Her children's book about their dog, Millie, and her puppies written during her White House years was, as were her other books, a bestseller.

In 2001, when George W. Bush took office, Barbara Bush became the only woman in American history to live to see her husband and son elected president.

She campaigned for son George W. and fiercely defended him from critics after he became president.

Asked in a 2013 interview about the prospect that her younger son, former Florida Gov. Jeb Bush, might mount a White House campaign in 2016, Bush quipped in her dry fashion, "We've had enough Bushes."

But when Jeb decided to run, she changed her mind and campaigned for him, appearing in a video for Jeb Bush's ultimately unsuccessful campaign, saying, "I think he'll be a great president."

She also was outspoken about Donald Trump. In one of her last interviews, the former first lady said in early 2016 she was "sick" of Trump, who belittled her son repeatedly during the 2016 GOP primary campaign, adding that she doesn't "understand why people are for him."

Most recently, Bush published a note in the spring edition of Smith College's alumnae magazine, where she declared: "I am still old and still in love with the man I married 72 years ago."

The college awarded Bush an honorary degree in 1989.

Bush battled health problems for much of her later life. She was diagnosed in 1988 with Graves' disease, an autoimmune disease that commonly affects the thyroid. She had open-heart surgery in 2009 and in 2008 underwent surgery for a perforated ulcer.

In her final years, she was diagnosed with chronic obstructive pulmonary disease, better known as COPD, as well as congestive heart failure. But, along with her husband, she kept an active public schedule, raising money for charity.

Contributions to this story also made by: Vahid Sadrzadeh
Share this article: