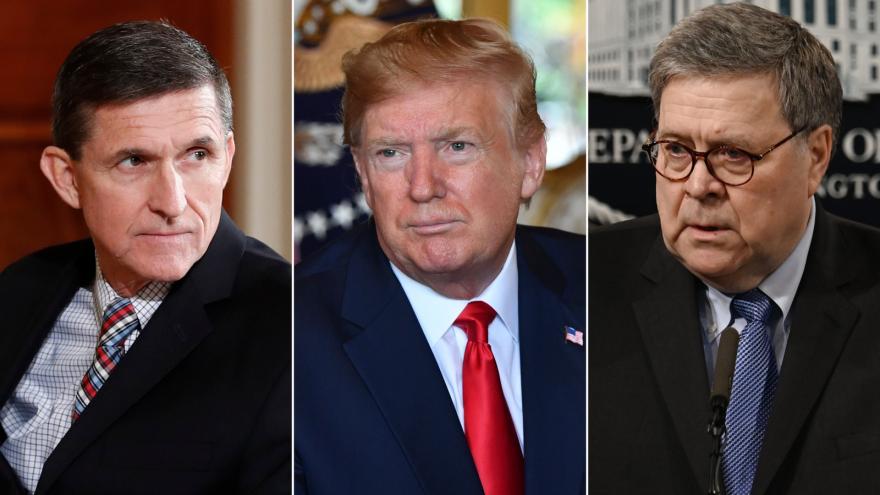 (CNN) -- Attorney General William Barr is ordering a re-examination of several high-profile cases, including that of former national security adviser Michael Flynn, US officials briefed on the matter say, in a move that could bring fresh scrutiny of the political motives behind actions at the Justice Department.

US Attorney Jeffrey Jensen of St. Louis has been tasked with taking a second look at some aspects of the sensitive cases, one of the officials said. It was not clear which other cases were under review, and what form the reviews had taken.

Jensen is working together with Brandon Van Grack -- the former prosecutor who led the case against Flynn in former special counsel Robert Mueller's investigation -- to review the case, according to a Justice Department official.

The revelation, first reported by The New York Times, comes days after Barr's Justice Department undercut career prosecutors in the case of Donald Trump confidant Roger Stone to recommend a reduced sentence. The decision led four federal prosecutors to quit the case and invited fresh questions about the impartiality of Barr's Justice Department from political matters. On Wednesday, CNN reported that Barr had also been pressing for a sentence for Flynn that would spare him from prison.

Jensen's involvement shouldn't be taken as a signal that the Justice Department would undermine their recent filings in the case, which have struck a harsher tone toward Flynn, the official told CNN.

It's possible that if the department continues to fight Flynn's attempts to withdraw his guilty plea, Van Grack could be a witness on the circumstances of his plea deal, according to several people familiar with the case.

Still, Jensen isn't just stepping in where Van Grack cannot, according to the official. He will be looking at the complete facts about the case. That may include the FBI's handling of Flynn's interview in the West Wing in January 2017, not just the signing of Flynn's plea deal in December that year.

Flynn, a retired Army lieutenant general who served as President Trump's first national security adviser and resigned a month into the new administration, is awaiting sentencing after pleading guilty in 2017 to charges that he lied to the FBI about a conversation he had with the then-ambassador to Russia. The aftermath of the conversation, including Trump's encouragement of then-FBI Director James Comey to go easy on Flynn, led to the eventual appointment of Mueller.

In recent months, Flynn changed lawyers and has waged a campaign to portray himself as a victim of malicious prosecutors. He is asking a judge to dismiss his case or allow him to change his plea to not guilty.

Flynn's new legal counsel has argued in court filings that the former national security adviser was ambushed in the January 2017 interview in an instance that was part of a larger pattern of abuses by the FBI. But a federal judge has rejected that claim and been harshly critical of Flynn's tactics.

The prospect of the Justice Department putting new scrutiny on the case would be a victory for Flynn and his legal team. It is also certain to please the President, who has maintained sympathy for his former aide and regularly claimed that cases emanating from the Mueller investigation were unjust.

Amid the fallout, Barr sought to distance himself from Trump's political pressure, giving an interview to ABC News on Thursday in which he issued a rare rebuke of the President's social media commentary on the Justice Department while defending his decision to go easier on Stone in advance of his sentencing.

Justice Department prosecutors in the Flynn case, from both the DC US Attorney's Office and department headquarters, have recently suggested in filings that they are gearing up to counter Flynn's attempts to get out of his charge and smear the prosecutors. But typically that could be handled by another prosecutor in the Washington area.

Jensen, a former FBI agent who went on to serve as a federal prosecutor in the office he now leads, was nominated by Trump in 2017 and was confirmed later that year in the Senate.

Flynn's criminal court case has stretched out more than two years. He became a model cooperator against the President in Mueller's investigation, but last summer he appeared to switch his approach and has sought to unravel his plea deal.

Over the past several months, Flynn's lawyers have appeared to lobby the President and the attorney general to side with their suspicions of the Mueller team, the FBI and Flynn's former defense counsel. Flynn's lawyers have touted how they "alerted leadership" at the Justice Department that they would "pursue the truth behind this (Flynn's) prosecution," according to a court filing in November.

Much of Powell's fire has been aimed at the way the FBI conducted the interview with Flynn just days into the Trump administration.

In the interview, held in Flynn's West Wing office at the White House, former FBI agent Peter Strzok and another agent asked Flynn about conversations he had with the then-Russian ambassador during the Trump transition about US and Russian policy. Flynn didn't tell them what he had discussed with the ambassador, and the agents noted in their memo that the general didn't show the classic physical signs of lying.

The recent arguments from Flynn's lawyers contradict what he said under oath at his original sentencing hearing in December 2018, which was abruptly postponed midway through. Flynn said under oath that he was guilty of lying to the FBI, didn't want to challenge the circumstances of his FBI interview and that he knew it was a crime to lie to the FBI. He also said he didn't think his rights had been violated because he didn't have a lawyer present for the FBI interview.

Since that hearing, where the judge expressed disgust with Flynn's lies, the former national security adviser's attorneys have maintained that they now want the Justice Department to let Flynn plead not guilty. They claim the retired lieutenant general was set up, and should have the case against him thrown out.

The judge disposed the Flynn team's conspiracy theory about the FBI and rejected efforts by Flynn's legal team to force the Justice Department to provide reams of documents about the Mueller investigation, the January 2017 interview and more. After that major defeat, Flynn's legal team took the even more drastic step of telling the judge that Flynn wanted to withdraw his guilty plea, days before if he was set to be sentenced last month.

Barr has pressed for leniency toward Flynn as he headed to sentencing -- and Flynn has pushed for a sentence where he would avoid prison. His sentencing date is currently not scheduled, and Judge Emmet Sullivan of the US District Court in DC is reviewing Flynn's recent requests.

In recent weeks, the Justice Department has sent mixed messages regarding its stance toward imprisoning Flynn, whose case is handled by a former Mueller prosecutor who now oversees the department's foreign lobbying cases and the DC US Attorney's Office. In some filings, the department asked for Flynn to go to prison for his crime and suggested he could face a perjury charge for switching his stance in the case. But later they suggested that probation also would be a sufficient consequence.

Flynn faces a likely sentence of zero to six months in prison for his single lying charge, and the judge has broad authority at sentencing.

The Justice Department's most recent court filing in the case, on Wednesday, asserted that it shouldn't be dismissed and that prosecutors acted appropriately with Flynn.

This story has been updated to include more background information.