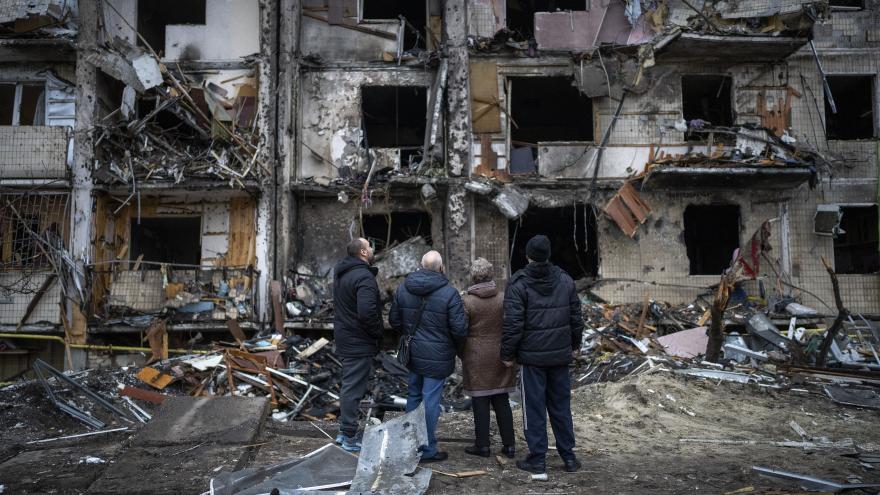 (CNN) -- Ukrainians in the capital Kyiv huddled in air raid shelters Friday morning, as a battle for the city raged overhead and Ukrainian forces sought to hold back rapidly advancing Russian troops by blowing up a key bridge.

Before dawn, explosions lit up the sky as Russia targeted the city with missile strikes, according to a Ukrainian government adviser. A CNN team reported hearing two large blasts in central Kyiv and a third loud explosion in the distance, followed by at least three more explosions to the south-west of the city a few hours later.

"Strikes on Kyiv with cruise or ballistic missiles continued," Anton Gerashchenko, adviser to the Head of the Ministry of Internal Affairs of Ukraine told reporters via text message Friday.

A tweet from the ministry asked citizens of the district to report any suspicious movements, adding: "Make Molotov cocktails and take down the occupier."

As Russian troops advance, US intelligence officials are concerned that Kyiv could fall under Russian control within days, according to two sources familiar with the latest intelligence.

US officials warned lawmakers that Russian forces who entered Ukraine through Belarus were about 20 miles (32 kilometers) away from Kyiv, sources told CNN.

The Ukrainian Defense Ministry said airborne assault troops blew up a bridge over the Teteriv River at Ivankiv, about 30 miles north of Kyiv, successfully preventing a Russian column of forces from advancing towards the capital, which has a population of close to 3 million.

For now, Ukraine's democratically elected government remains intact but President Volodymr Zelensky warned in a video address late Thursday that "enemy sabotage groups" had entered this city and he is their No. 1 target. "They want to destroy Ukraine politically by destroying the head of state," he said.

"Russian forces continued to launch missile strikes on the territory of Ukraine. They say that they are only targeting military facilities, but these are lies. In fact, they do not distinguish in which areas they operate," he said. "Such attacks on our capital haven't occurred since 1941."

In an address Friday morning, Zelensky said Ukrainians were "showing their true heroism" but that they were defending their country "alone," as "the most powerful country in the world looked on from a distance," an apparent reference to the United States. The sanctions imposed on Russia by Western powers are "not enough to get these foreign troops off our soil," he said.

A few hours later, Zelensky released a message in which he again called for Russian President Vladimir Putin to hold direct talks. "There is fighting all over Ukraine now. Let's sit down at the negotiation table to stop the people's deaths," he said, speaking in Russian.

"As you know, today the President of Ukraine Zelensky announced his readiness to discuss the neutral status of Ukraine," Peskov said, according to RIA.

"Initially, Russian President Vladimir Putin said that the purpose of the operation was to help the LPR and the DPR, including through the demilitarization and denazification of Ukraine. And this, in fact, is an integral component of neutral status." The LPR and DPR refer to the Donetsk and Luhansk People's Republics, separatist areas in eastern Ukraine recently recognized by Russia as independent.

Putin has repeatedly called for the "denazification" of Ukraine, language that has been roundly condemned internationally, especially considering that Zelensky is Jewish.

Zelensky has not directly proposed neutral status but has signaled a willingness to discuss it, while insisting his country be provided security guarantees.

Asked by CNN at a news conference Friday what Moscow's plans were for the leadership of Ukraine as Russian forces advance on Kyiv, Russian Foreign Minister Sergey Lavrov replied: "Nobody is going to attack the people of Ukraine."

In an interview with CNN on the streets of Kyiv, former Ukrainian President Petro Poroshenko accused Putin of being "simply crazy" in wanting to "come here to kill Ukrainians" -- and vowed they would resist. "We demonstrate a unique quality that we can stand against Russian aggression," he said.

The advance on Kyiv comes only a day after Russian forces entered Ukraine from three sides, by land, sea and air, prompting a barrage of international condemnation and sanctions -- and questions about Putin's wider ambitions for the country and its capital.

It's unclear how long Ukrainian forces can resist the advance of Russian forces who are better equipped and have superior air power.

Two residential buildings in Kyiv suffered damage in the early hours of Friday, but it's not clear if they were intentionally struck or hit by debris, or if anyone was injured.

Ukrainian Deputy Interior Minister Evgeny Yenin told CNN a Ukrainian Sukhoi Su-27 fighter jet was shot down over Kyiv. Photos tweeted by the emergency forces appear to show a fire at a two-story private house with debris from what appears to be a plane nearby. It is unclear if the house was hit by remnants of the jet.

Separately, images showed firefighters working to put out a blaze at an apartment building on the left bank of the city.

As they approach, many Ukrainians are preparing to fight back. Some 18,000 guns with ammunition have been distributed to reservists in the Kyiv region alone since the Russian invasion began early Thursday, Ukrainian Defense Minister Oleksiy Reznikov said, with more weapons on their way.

Ukrainian lawmaker Kira Rudik told CNN she believed in the Ukrainian military's capabilities and that it was her duty to remain in Kyiv. "I'm armed and I have my crew armed and we have a couple of sets of people with territorial defense who are also armed and who will fight for every inch of Ukrainian soil -- right now of Kyiv soil -- not to let the Russians in."

Outside the Kyiv region, fighting continued in cities including Sumy, in the northeast, Chernihiv in the north and Kherson to the south.

A CNN team that visited a bridge crossing from Russian-held areas into the southern city of Kherson saw four large shell craters, 10 discarded Ukrainian armored vehicles and several bodies, but the Ukrainians appeared to have been able to push Russian forces back.

Low-flying jets could be seen overhead and air raid sirens wailed across the city.

A Russian defense ministry spokesperson said in a statement that a "counter-offensive" was underway in Ukraine's eastern Donbas region, and that Ukrainian service members had surrendered to Russian troops and pro-Russian separatists. CNN could not immediately check the veracity of those claims.

Officials in the country believe Russia's plan is to overthrow the Ukrainian leadership and install a pro-Russian government.

Those fears were shared with US Secretary of State Anthony Blinken, who said Thursday that he's "convinced" Moscow is going to try to overthrow the Ukrainian government.

If that happens, Blinken said he believes "Moscow has developed plans to inflict widespread human rights abuses -- and potentially worse -- on the Ukrainian people."

French Foreign Minister Jean-Yves Le Drian said Putin, in choosing to launch a "massive offensive" had "decided to take Ukraine off the map of nations," in comments Friday to radio station France Inter.

The fighting in Ukraine appears to be some of the worst conventional warfare Europe has seen since World War II and the conflicts in the Balkans in the 1990s. Preliminary figures indicate 137 Ukrainian solders have been killed, including every soldier defending an island in the Black Sea that was taken over by Russian troops, according to President Zelensky.

The Ukrainian Defense Ministry said its armed forces had caused around 800 casualties among Russian forces since the attacks started early on Thursday. It was not immediately clear whether the ministry was referring solely to the number killed and CNN is not able to independently verify Ukraine's figures.

By the end of Thursday, Putin's forces had launched "in total more than 160 missiles for airstrikes," a senior US defense official said, prompting a response reminiscent of the late 1930s, with vulnerable children evacuated by train from eastern Ukraine and packed subway stations turned into makeshift bunkers as air raid sirens wailed.

Overnight, in an ominous sign a ground war could escalate, Zelensky barred male citizens between the ages of 18 and 60 from leaving the country, according to the State Border Guard Service.

Zelensky also ordered a general military mobilization "in order to ensure the defense of the state, maintaining combat and mobilization readiness of the Armed Forces of Ukraine and other military formations, in a declaration signed late Thursday.

More than 100,000 people have already fled areas most at risk of attack within Ukraine, according to the United Nations refugee agency. The mass movement followed warnings from the US Ambassador to the UN, who said Russia's actions in Ukraine could create one of the largest refugee crises facing the world today, displacing as many as five million people.

Polish officials reported an increase in the number of people crossing into the country from Ukraine in the hours after the Russian invasion began.

The European Union has announced new sanctions on Russia, designed to have "maximum impact on the Russian economy and political elite."

"We want to financially isolate Russia, we want to cut all the ties between Russia and the international financial system," said French Finance Minister Bruno Le Maire.

Speaking in Brussels on Thursday, NATO Secretary-General Jens Stoltenberg described Russia's attack on Ukraine as a "brutal act of war."

A big concern for NATO is whether Putin's intentions lie beyond Ukraine, a prospect that risks drawing all 30 members -- including the United States, the United Kingdom, Canada, France and Germany -- into a wider conflict on European soil.

"You don't need intelligence to tell you that that's exactly what President Putin wants. He has made clear he'd like to reconstitute the Soviet Empire, short of that he'd like to reassert a sphere of influence around the neighboring countries that were once part of the Soviet bloc," said Blinken on CBS Evening News.

Blinken said NATO would stand in the way if those were Putin's ultimate goals.

"Now, when it comes to a threat beyond Ukraine's borders. There's something very powerful standing in his way. That's article five of NATO, an attack on one is an attack on all," the top diplomat said.

On Thursday, the US Secretary of Defense ordered the deployment of 7,000 US service members to Europe. The deployment brings the number of US troops moved towards eastern Europe at more than 14,000.

In his address announcing Russia's "military operation" in Ukraine Thursday, Putin threatened "those who may be tempted to intervene" on Ukraine's behalf, saying Russia's response would be "immediate" and lead to "such consequences as you have never experienced in your history," he said.