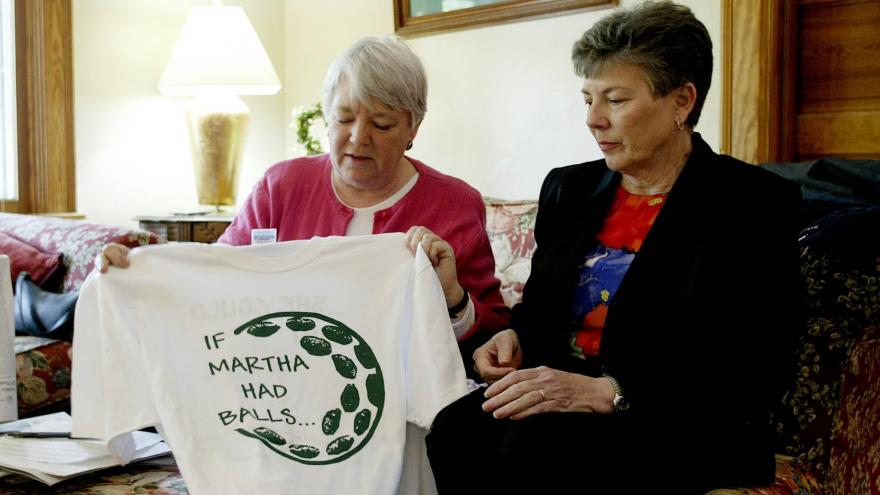 (CNN) -- It's 15 years since Augusta National reached arguably a nadir in its relationship with women.

In April 2003, women's rights activist Martha Burke had been publicly campaigning for almost a year in an attempt to get the golf club to change its antiquated male-only members rule.

Attempts to get the late William Johnson, then the chairman of Augusta National, to admit the first female member began with a letter in June 2002 and culminated in a protest in a field adjacent to the club in April the following year.

Burke and Johnson -- both coincidentally nicknamed "Hootie" in their youth, though the Augusta chairman would retain it into adulthood -- would engage in a very public discourse.

Notably Johnson would go on to say that women, one day, might become members at Augusta but "not at the point of a bayonet."

It wasn't until 2012 that women were even allowed to become members at the club, with former US Secretary of State Condoleezza Rice being one of the first to be invited.

This week, 15 years on from Burke's campaign, Augusta National, the venue for the prestigious annual Masters tournament, has taken further strides to make itself a more inclusive venue by introducing a new amateur women's competition.

On Wednesday, club chairman Fred Ridley announced that the new tournament -- called the Augusta National Women's Amateur Championship -- will be held annually in the week leading up to the Masters, with the final round taking place at Augusta beginning in 2019.

"Fifteen years ago this week, a lot of us were actually out in a parking lot watching a protest," sports columnist Christine Brennan told Don Riddell.

"It was one of the low points, not just for golf, but frankly for equality, for women, not even in sports, but in our culture. It was that Hootie Johnson, 'point of a bayonet, we're not going to have women members.'

"To think that in those 15 years, here we are in 2018 and right out of the box Fred Ridley, the father of three daughters -- he mentioned that and I don't think that's insignificant -- announces this historic tournament that will be women playing at Augusta National."

It will be the first time since the club opened in 1933 that a women's tournament has been held at the venue, with Augusta previously coming under heavy criticism for its lack of inclusiveness.

The man who succeeded Johnson as chairman, Billy Payne, was the first to invite women to become members, welcoming Rice and banker Darla Moore, who herself was friends with Johnson.

Gini Rometty, appointed in 2012 as the first female CEO of IBM, also became a member in 2014 under Payne's chairmanship. Johnson initially made Rometty the first IBM CEO to be denied membership at Augusta.

The Augusta National Women's Amateur Championship will feature 72 of the top ranked players in the world and will be played out over 54 holes.

The opening two rounds are set to be hosted at the Champions Retreat club, just a 30 minute drive from Augusta, before the top-30 players who make the cut move to Augusta for the final round.

Victory in the inaugural competition will provide the winner with an invitation to the next five Augusta National Women's Amateur Championships, among other tournaments, provided she remains an amateur.

"We believe this event will have a significant and lasting impact on the future of the women's game," Ridley told reporters at Wednesday's press conference.

"Our hope and expectation is that this event will further energize those who already love the sport and inspire others through the dream of competing at Augusta National.

"I just felt that there was an opportunity and a platform to make a statement as to how we feel about this part of the game. I just felt it was time to do that. I happen to have three daughters, and they all love golf."

There were initially scheduling concerns when the tournament was announced, with the first women's major of the year, the ANA Inspiration, finishing on the same weekend as the new event.

This could potentially see some golfers having to make a decision between the two events.

Ridley told reporters he had been in contact with Mike Whan, head of the LPGA, who reassured the current Augusta chairman that "from a big picture this is a win for women's golf."

Augusta also announced the event is expected to be televised and tickets for the final round will be made available to fans through a random selection process.

"What a platform," Brennan said. "The greatest platform ever for the women's game and great respect for women's golf, which has never really happened from the powers that be in this sport.

"This is the grandest stage in the sport, there is no place that has more respect in the world than Augusta National. It's smart because they need women to play the game of golf to showcase women, to get them involved in the sport.

"You've got millions and millions of girls and women playing sports in this country and they're not going to the game of golf and the hope here is to bring some of them back to playing golf."