BBQ and tamales. Peach cobbler and a hammer: The Houston and Atlanta mayors make a World Series wager 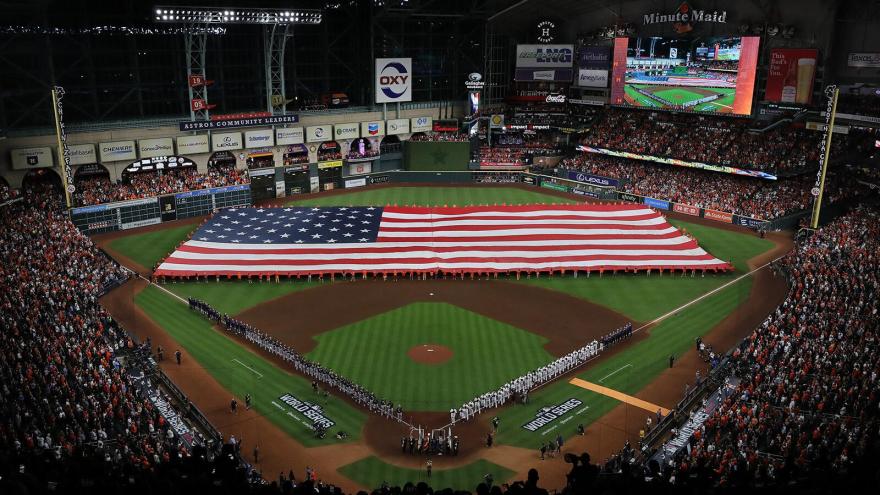 The Astros and Braves line up for the national anthem prior to the first pitch in Houston on October 26.

(CNN) -- If Houston Mayor Sylvester Turner has a new hammer next week it's bad news for Atlanta Braves fans.

As part of a yearly tradition, the mayors of the two World Series participants have placed a friendly wager with each other.

The losing mayor, be it Turner or Atlanta Mayor Keisha Lance Bottoms, will have to wear a jersey of the winning team for one day.

The winning mayor will receive gifts with notable items from the losing city.

Turner would send brisket fried rice and pork ribs from Blood Bros Barbecue, a case of H-Town Pils beer from Saint Arnold Brewing Company and tamales and lemonade from Irma's Original, he said.

And a hammer, from The Home Depot.

That would honor, Henry Aaron, the Braves legend known as the "Hammer" or "Hammerin' Hank," who died in January.

After a victory in Game 1 on Tuesday, the Braves led the best-of-seven World Series one game to none.

The mayors announced the bet Tuesday with each proclaiming their friendship for the other.

"In any other (year), I would be rooting for the Braves," Turner said on a social media video with Bottoms. "Just not this time."

"I understand. The feeling is mutual," Bottoms said, adding the Turner is her favorite mayor.

After Bottoms told Turner what Atlanta will send if the Braves lose, the Houston mayor said to just send it to him "right now."

Bottoms told Turner she loved him and the people of Houston were fortunate to have him as mayor.

"Thank you for everything you've done for me personally," she said. "And I appreciate you and I am so sorry y'all are going to have to lose this World Series."