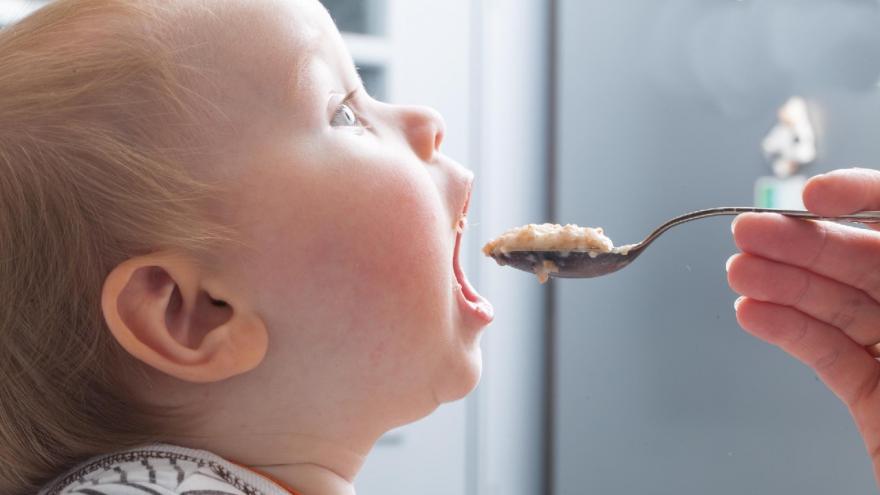 Beech-Nut Nutrition voluntarily recalled an infant rice cereal on June 8 because the product exceeds a US Food and Drug Administration limit of 100 parts per billion of arsenic. The company also announced it would no longer sell baby rice cereal. Photo courtesy: Shutterstock/ElRoi

(CNN) -- Beech-Nut Nutrition voluntarily recalled an infant rice cereal Tuesday because the product exceeds a US Food and Drug Administration limit of 100 parts per billion of arsenic. The company also announced it would no longer sell baby rice cereal.

Research has shown that even low levels of arsenic exposure can impact a baby's neurodevelopment.

"No illnesses related to these product codes have been reported to date, and no other rice cereal production dates or Beech-Nut products are affected by this recall," the company said in a statement on its website.

"Beech-Nut has also decided to exit the market for Beech-Nut branded Single Grain Rice Cereal," the FDA said in its recall announcement.

In its announcement, the FDA quoted Jason Jacobs, Beech-Nut's vice president of food safety and quality.

"The safety of infants and children is Beech-Nut's top priority. We are issuing this voluntary recall, because we learned through routine sampling by the State of Alaska that a limited quantity of Beech-Nut Single Grain Rice Cereal products had levels of naturally-occurring inorganic arsenic above the FDA guidance level, even though the rice flour used to produce these products tested below the FDA guidance level for inorganic arsenic," Jacobs said.

"To our knowledge, this is the first recall of infant rice cereal due to high arsenic levels," said Jane Houlihan, research director for Healthy Babies Bright Futures, a consumer advocacy group that studies the levels of toxic metals in baby foods.

In 2019, Healthy Babies Bright Futures found four of seven infant cereals they tested had arsenic over 100 parts per billion.

"The FDA announcement of the recall is great news," Houlihan said. "It's so important for babies that this cereal not make it to market. We fully support FDA's enforcement action to help reduce arsenic exposures for these little ones who are so vulnerable."

In March of this year, the FDA told all baby food manufacturers that they must consider toxic chemicals when they test their baby food for potential hazards.

"Dangerous levels of toxic metals like arsenic, lead, cadmium and mercury exist in baby foods at levels that exceed what experts and governing bodies say are permissible," Democratic Rep. Raja Krishnamoorthi of Illinois told CNN when the report was released. Krishnamoorthi is chair of the House Subcommittee on Economic and Consumer Policy, which conducted the investigation signed by Democrats.

Krishnamoorthi said the spreadsheets provided by manufacturers were "shocking," because they showed evidence that some baby foods contain hundreds of parts per billion of dangerous metals.

"Yet we know that in a lot of cases, we should not have anything more than single-digit parts per billion of any of these metals in any of our foods," he told CNN.

Whether the baby food was organic did not matter, the subcommittee found -- levels of toxic metals were still high.

At the time, Gerber, Beech-Nut, Nurture and Hain all told CNN that they do implement strict testing and quality standards for the products they sell.

Arsenic is a natural element found in soil, water and air, with the inorganic form being the most toxic. ("Inorganic" is a chemical term and has nothing to do with the method of farming.)

Because rice is grown in water, it is especially good at absorbing inorganic arsenic and, according to the FDA, has the highest concentration of any food.

Concentrations of arsenic were twice as high in the urine of infants who ate white or brown rice than those who ate no rice, according to a 2016 study. Arsenic levels were highest in babies who ate rice cereal, often given several times a day to introduce babies to solids.

If you think that unhulled brown or wild rice might be healthier choices, think again. They contain more arsenic than white rice, because the milling process used to create white rice removes the outer layers of the grain, where much of the arsenic is concentrated.

You can't rely on organic foods either. A 2012 study found that brown rice syrup, a frequent sweetener in organic foods, was also a source of significant levels of arsenic. One "organic" milk formula marketed to toddlers had levels of inorganic arsenic that were six times the levels currently considered safe by the US Environmental Protection Agency.

Arsenic is a known carcinogen that can influence the risk of cardiovascular, immune and other diseases, but it's the impact on a developing baby's brain that is most worrisome, experts say.

A 2004 study looked at children in Bangladesh who were exposed to arsenic in drinking water, and it found that they scored significantly lower on intellectual tests.

A meta-analysis of studies on the topic found that a 50% increase in arsenic levels in urine would be associated with a 0.4-point decrease in the IQ of children between the ages of 5 and 15.

Other studies have looked at how inorganic arsenic exposure in during pregnancy could alter a baby's immune system. A 2013 study of levels of arsenic in pregnant women who ate rice products found that even low levels of exposure to inorganic arsenic in utero were related to infant respiratory infections in the first four months of life. Babies exposed to the highest levels were associated with severe infections that needed antibiotics to resolve.

Because of these concerns, child safety advocates have been critical of the FDA's cut off levels for arsenic in cereals, saying they are not low enough to adequately protect infants.

"In setting the action level that is driving the recall, FDA didn't consider harm to infants' developing brains and failed to account for children who eat more than average amounts of rice," Houlihan said.

National diet surveys show that Hispanic infants and toddlers are 2.5 times more likely to eat rice on a given day than other children, according to Healthy Babies Bright Futures, while Asian Americans eat nearly 10 times more rice than the national average.

In addition, the group said, children diagnosed with celiac disease -- an intolerance to wheat -- often eat rice products instead and thus ingest some 14 times more arsenic than other children.

"The FDA should lower the allowable limit," Houlihan said. "In the meantime, parents have options -- other types of infant cereal have one-sixth as much arsenic as infant rice cereal, on average, and are safer choices."