Behind on testing, Texas tries to be first to reopen 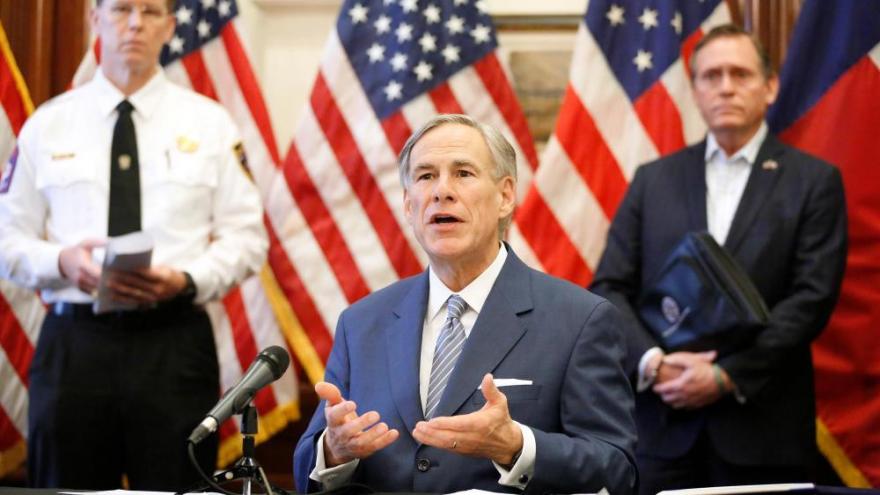 Texas Gov. Greg Abbott on Friday announced he is looking to reopen Texas businesses in early May, but schools will remain shuttered.

(CNN) -- As Texas Republican Gov. Greg Abbott formulated a plan this week to reopen the world's 10th largest economy, he had to strike a delicate balance between two opposing forces: a push from the state's powerful business community eager to get back to work and health professionals and economists warning that a premature restart could be deadly.

In the end, Abbott took a measured approach. Instead of kicking off a full restart, the Texas governor announced that a group of medical and economic experts will guide him through a series of incremental steps aimed at slowly reopening the state's economy.

The group's aggressive name, the "Strike Force to Open Texas," belies Abbott's surprisingly cautious framework. Plans to restart business won't come until April 27, and Abbott stressed they will be determined by "data and by doctors."

Still, Abbott is ahead of the curve as one of the first big state governors to announce a firm time line for lifting his April 2 stay-at-home order.

"Opening in Texas must occur in stages," Abbott said during his briefing Friday. "Obviously, not all businesses can open all at once on May 1." A premature opening of private businesses, he said, would risk further outbreaks and "be more likely to set us back, rather than to propel us forward."

Friday's plan was a significant step back from what some had anticipated would be a much more aggressive push from Abbott to reopen the famously pro-business Texas. The Lone Star State and its $1.8 trillion economy, second only to California in size, has been hit particularly hard by a one-two punch of tumbling oil prices and a global pandemic.

Texas is awash in unemployment claims that have topped one million in the past four weeks—representing about 7.2% of the state's total labor force.

At the same time, it's only been two weeks since Abbott issued his stay-at-home order. Texas remains woefully behind many of the nation's other largest states in the number of coronavirus tests conducted, which made some of Abbott's early optimism about re-opening all the more striking. In a state of 29 million people, only 169,536 coronavirus tests had been conducted as of Friday, according to the Texas Department of State Health Services, with a total of 17,371, cases reported and 428 coronavirus-related fatalities.

That's put Abbott in a difficult position of having to protect the Texas economy while heeding the warnings of epidemiologists. As he's discussed plans to get Texas back to work, Abbott has toggled between making it sound as if Texas will be among the first states ready to throw open its doors and striking a more prudent tone.

Through the week, as Abbott's public messaging made it sound less likely that he would announce a grand reopening, he began taking fire from members of his own party who say he's moved too slowly to reinvigorate the economy and has been overly deferential to public health experts. On Thursday for example, Don Huffines, a former Texas Republican state senator who represented Dallas County, wrote a blistering op-ed for the Austin American-Statesman, excoriated Abbott for his handling of the coronavirus crisis.

Huffines charged that Abbott has been in lockstep with "emotional decision makers in Washington who have caused massive economic damage" instead of recognizing Texas' power as a sovereign state.

"He relies on Washington for direction, and lets local leaders walk in where his lack of leadership creates a void. Mr. Abbott alone is accountable for destroying the Texas economy," wrote Huffines.

Meanwhile, Texas Democrats are highlighting a recent investigative piece by the Houston Chronicle stating that Texas is near the bottom among the 50 states in per capita testing.

"As difficult as it may be, Texas must wait for the right time to reopen," said Manny Garcia, executive director of the Texas Democratic Party. "If our leadership does not heed the advice of public health officials, we risk an even deeper public health and economic catastrophe. Lives are on the line."

In the end, what Abbott and many other elected officials face is far more than just an economic decision.

"This is ultimately a moral dilemma between the good of the majority of the population based on an improved economy, versus those most damaged by letting this disease continue to spread and potentially letting the hospital system be overwhelmed," said Bill Gilmer, an economist at the University of Houston. "It's not just about economics, it's a moral decision."

A push to expand testing

In interviews with CNN this week, Texas medical and public health officials warned that Texas is nowhere near the level of testing needed to draw firm conclusions about the extent of the outbreak.

"It needs to be at a much higher scale than it has been," said Alanna C. Morrison, an epidemiologist and department chair within the School of Public Health at The University of Texas Health Science Center at Houston. "They've been testing folks that are really symptomatic or in the hospital, and it needs to be more widespread."

She noted that Harris County, which includes Houston, has about 4.7 million people, but as of last week: "We've only had 12,585 tests, which to me, as an epidemiologist, was staggering," said Morrison. This week's county-by-county testing data was still not available at the time of Abbott's briefing.

On Friday, Abbott highlighted that Texas has the "second-most recoveries from Covid-19 of all states in America" and the current availability of hospital beds. "We have demonstrated that we can corral the coronavirus," the governor said.

But those are high points within a sea of inconclusive data about the spread of coronavirus across Texas. Pressed on the state's lagging testing capacity Friday, Abbott said he expects a major expansion of the availability of tests by late April but he declined to set a goal on the number of tests needed per day.

He did emphasize however that the amount of business openings in May will hinge on whether the "infection rate continues to decline" and whether testing capabilities are sufficient contain outbreaks of the virus.

The state's trend line both in cumulative cases and cumulative fatalities continued to rise this week, according to state health data posted Friday.

Perhaps most notably, the state is still two weeks away from the April 29 date when the University of Washington's Institute for Health Metrics and Evaluation predicts that Texas' coronavirus deaths and the need for resources will peak.

"You would hope that we would have a higher level of testing capacity when the economy does reopen," said Timothy Callaghan, an assistant professor in the Department of Health Policy and Management at the Texas A&M School of Public Health. "If you're going to be sending everyone back to work, even before peak, you risk the chance of the virus spreading—and potentially spreading quickly."

Abbott's stay-at-home order is in effect statewide, but local officials -- including the elected county judges who head up emergency management, as well as perform many other administrative and judicial duties -- have offered varied assessments on the expected pace of reopening in their counties. (The statewide order currently supersedes all local orders).

"Universal, rapid testing so everybody knows who's healthy and who's not. That's the only way we get back to work," she said. "Without adequate testing capacity fighting Covid-19 is like shooting in the dark."

Mobile testing sites in Harris County have been "overwhelmed" by demand, Hidalgo said -- the state added two mobile labs on Thursday in the Houston area -- leading local officials to scramble to move resources around. In an interview earlier this week, Hidalgo's communications director Rafael Lemaitre noted that beyond the test shortages, the results often take a week to come back. "We're the third largest county in the US and we're concerned about being the next domino to fall," he said.

Abbott's job of restarting the Texas economy is made all the more difficult by the crash in oil prices, brought on by a struggle between Russia and Saudi Arabia for dominance in the global crude market. That's led to an historic oversupply, and a 50% drop in the price of a barrel of oil since mid-February. While that's pushed gasoline prices to below $2 a gallon in much of the US, it's also wiped out billions of dollars in economic activity across oil-rich Texas.

That's added urgency to business leaders who have nudged Abbott toward a plan for reopening, while stressing it should be made in close coordination with medical experts. At the Greater Houston Partnership, the regional chamber of commerce, last week a group of business leaders began to formulate a plan on how to get the state back to work.

Even before the economic shock of the coronavirus shutdown -- and before many Americans simply stopped driving -- layoffs were already rippling through the oil economy in Texas, with many areas, including Houston, facing a potential recession due to cheap oil.

"Along with what is happening around the virus, much of the Houston economy was still heading in a negative direction around oil and gas," said Harvey, who noted this latest downturn could rival the one from the 1980s when cheap oil cost the Houston economy one out of every eight jobs.

The federal government has administered some relief, as Trump has vowed to pay close attention to the needs of the energy sector. On Thursday, Abbott touted the fact that Texas ranks first in Small Business Administration approvals for loans through the Paycheck Protection Program "to help businesses stay afloat and get ready to reopen." The federal government has approved some 88,434 loans for Texas businesses totaling $21.7 billion, he said.

But many small business owners believe government officials will have to do much more to get the economy moving again. Smita Patel, who owns the River Oaks Flower House in Houston, says nothing has affected her business on this scale in 21 years.

"I mean, usually we have hurricanes and bad storms and everything, but we get over that, right?" Patel told CNN in an interview Tuesday, noting she and her husband are paying employees out of pocket. "We are taking it a day at a time."