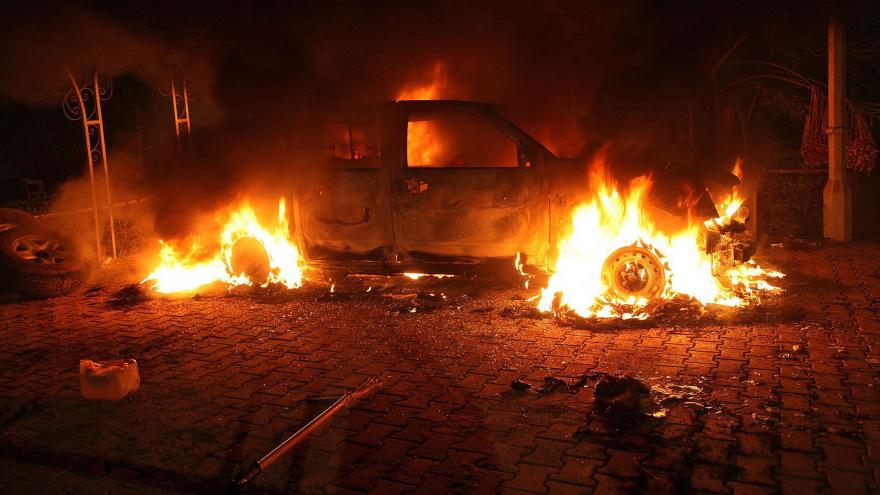 A vehicle and the surrounding area are engulfed in flames after it was set on fire inside the US consulate compound in Benghazi late on September 11, 2012. Source: STR/AFP/Getty Images
By Katelyn Polantz, CNN

(CNN) -- Mustafa al-Imam, a suspect in the 2012 Benghazi attacks, on Thursday was found guilty by a federal jury on two counts -- conspiracy to provide material support and resources to terrorists and maliciously destroying property at the US diplomatic compound in Benghazi.

The jury has not been able to reach a verdict on remaining charges, which include murder counts. DC District Judge Casey Cooper sent the jurors back to deliberate for the rest of the afternoon. They broke for the day just after 4 p.m. and will return Monday to continue deliberations.

It is possible the judge may declare a mistrial on those counts if they still can't reach a verdict. The jury began deliberating on June 5. The trial began in early May.

US forces captured al-Imam in 2017 in Libya for his suspected role in the 2012 attacks on the US diplomatic mission in Benghazi, which killed four Americans, including Ambassador Christopher Stevens.

At the time, an administration official said the US government had video of al-Imam at one of the two sites that were attacked, and that the US had been monitoring the terrorist operative's location for some time.

Al-Imam is the second suspect to be convicted by a US court for his role in the attack.

Abu Khatallah was sentenced last June to 22 years in prison.