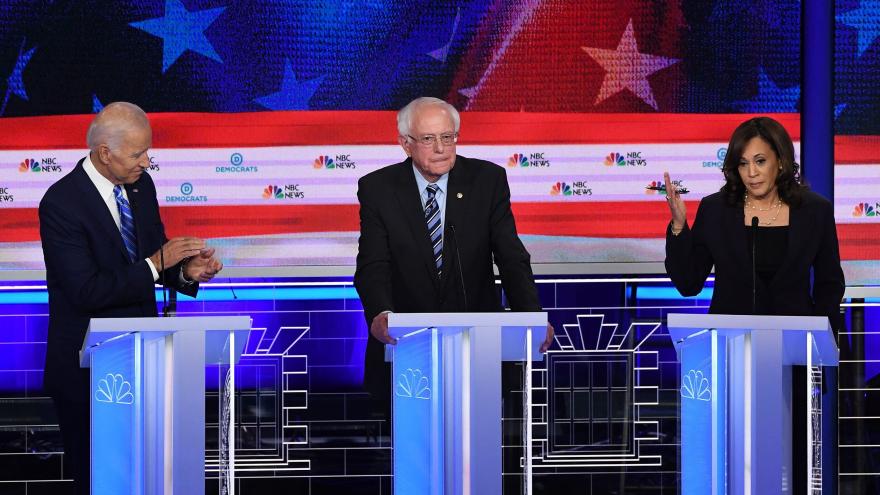 (CNN) -- Sen. Bernie Sanders is a staple on the front lines of the labor fight, leading the charge in Washington and around the country to raise the minimum wage for workers to $15 an hour. But within his own campaign, which unionized earlier this year, tense discussions over pay have spilled out into public view.

The dispute threatens to undermine Sanders' political message and, if it were to escalate, his ability to credibly advocate for workers around the country currently engaged in their own struggles to negotiate higher wages and better working conditions.

Word of the discontent first emerged publicly on Thursday night in a Washington Post report detailing campaign field staff's frustration that their base pay, in some instances, does not match the $15-an-hour mandate that Sanders, as a legislator and candidate, has pressed for as the base minimum wage across the country. As the campaign ramps up, field staff are often required to work 10-hour, 6-day weeks, driving down their average hourly compensation.

In a statement to the Post, Sanders on Friday defended his campaign salaries and said he was "very proud" his presidential campaign was the first to unionize workers.

"We have a historic contract agreement that provides unprecedented protections and benefits," he said in the statement provided to the Post. "Through that framework, we are committed to addressing concerns in good faith through the bargaining process."

Earlier Friday, Sanders expressed frustration in an interview with the Des Moines Register that staffers were airing their complaints publicly.

"It does bother me that people are going outside of the process and going to the media," he told the Iowa newspaper. "That is really not acceptable. It is really not what labor negotiations are about, and it's improper."

A source told CNN that campaign officials were in a room with representatives from the union, discussing the topic, when the campaign was first made aware of the Post's story.

In a statement to CNN, Sanders campaign manager Faiz Shakir said that the campaign offered the field staff a boost in pay that would guarantee a $15 an hour salary commensurate with a 60-hour work week. That proposal, according to Shakir, was rejected by the membership.

"As strong supporters of organized labor, this formal process is the sole process for making changes to the collective bargaining agreement. It would be anti-union, and likely illegal, for the campaign to negotiate outside this process," Shakir said. "We look forward to continuing those discussions and obviously are disappointed that some individuals decided to damage the integrity of these efforts before they were concluded."

As the negotiations continue, Shakir said he would be limiting the work week for field staff to only 40 hours a week.

Jonathan Williams, a spokesperson for the UFCW Local 400 would not comment on the specifics of the negotiations, but in a statement the union said it would continue working with the campaign to sort out the ongoing concerns.

"First and foremost, our union is a democratic organization. We cannot comment on specific, ongoing internal processes between our members and their employer, particularly without the consent of our members," the union said. "We can say that our union is proud to advocate for every member in every workplace we represent to earn a better life -- both during contract negotiations and beyond."

The leaked details from the negotiations and internal messaging within the campaign came at a particularly uncomfortable time for Sanders, who had only hours earlier praised the House Democrats for their historic vote to pass of the Raise the Wage Act of 2019, which would raise the federal minimum wage to $15 an hour.

"Four years ago, when I first introduced legislation to increase the minimum wage to $15 an hour, it was considered an impossible dream," Sanders said in a statement on Thursday. "Today, I am proud to say that a $15 minimum wage has gone from laughable to inevitable."

Its fate within his own campaign, though, remains unresolved. Campaign work hours are notoriously hard to plan out and predict, which is one of the reasons three current presidential hopefuls' staffs -- including Sen. Elizabeth Warren's and former Housing and Urban Development secretary Julián Castro's -- have unionized and others down the ballot have done the same.

A source directly connected to the ongoing negotiations between the Sanders campaign and the union representing his field staff, the United Food and Commercial Workers Local 400, confirmed to CNN on Friday that the two sides are actively negotiating staffers' pay scale within the confines of the collective bargaining agreement agreed to in early May.

"Political campaigns are cause-driven and because there is always more work that can be done, staffers are typically worked to the bone," Local 400 President Mark P. Federici said back on May 8, after their contract was ratified. "But it doesn't have to be this way. Even political work must be subject to minimum standards. I congratulate our members on the Bernie Sanders campaign for making their own revolution."

But the details revealed on Thursday night underscore the difficulties that have made the unionization of political campaigns so difficult, and unusual, for so many years.

Still, Sanders has been supportive of the effort and the campaign voluntarily recognized staffers' bargaining unit.

"We cannot just support unions with words, we must back it up with actions," he tweeted back in March. "On this campaign and when we are in the White House, we are going to make it easier for people to join unions, not harder."

Sources from both the campaign and the union confirmed that the collective bargaining agreement, ratified in May, set a base pay rate for field staff at $36,000 a year. That salary works out to under $15 and hour based on the 60-hour work week. But in addition to the pay scale, the CBA also provides full health insurance without a premium, mental health benefits, parental leave options, a gas card for use while on the job and other options not traditionally available to low-level campaign staff.

Additionally, the CBA also has a provision within the union construct called "Labor Committees," which allows for rank-and-file members to serve as part of a democratic process allowing them to raise concerns about various issues. That includes pay, but could also be housing options, workplace environment and benefits.