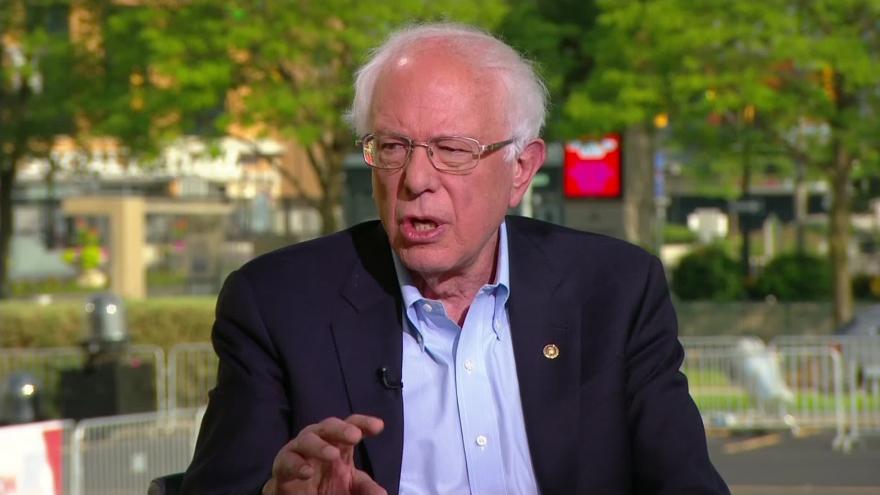 (CNN) -- The Democratic primary campaign trail took a detour north of the border Sunday, when Vermont Sen. Bernie Sanders led a group of roughly a dozen people with Type I diabetes into Canada to purchase insulin for a fraction of the price they would be charged in the United States.

Rising insulin costs have led an estimated one-in-four patients to ration the drug, a potentially deadly -- and increasingly commonplace -- practice among those who either lose insurance or cannot afford plans that sufficiently cover their expenses.

Sanders' trip, which began a little more than 48 hours before the second round of Democratic debates, was designed to bring new attention to the hardships facing people with Type I diabetes -- issues, he said again on Sunday, that can be traced directly back to "greedy" pharmaceutical companies and lawmakers who refuse to take on the crisis.

By traveling to Canada, which has a single-payer, government-backed health care system, he was also making an implicit case for his "Medicare for All" plan, which would create a similar system in this country.

Canada, however, also has a private insurance industry since its government program doesn't cover all benefits. Millions of Canadians have private plans to help pay for prescription drugs and other services.

Sanders and the "medical refugees," as one of the women in the caravan called the group, were greeted outside the Olde Walkerville Pharmacy in Windsor by a crowd of dozens of Canadians, who cheered their arrival as a man with an accordion serenaded the visitors.

"It's an embarrassment for those of us who are Americans, we love our Canadian neighbors and we thank them so much, but we should not have to come to Canada to get the medicine we need for our kids to stay alive, we can do that in America," Sanders said after leaving the pharmacy. On the bus en route, Sanders waved a vial of insulin, which can go for about $340 in the US. In Canada, it costs about a tenth as much and does not require a prescription to buy.

Quinn Nystrom, a Minnesota native, said she was contacted by Sanders' team via direct message on Twitter and asked to take part in the trip. She described a friend who, unable to afford her medication, drives around Michigan collecting free samples and purchasing black market insulin.

"I've seen the criticism from people (on social media), saying this is a publicity stunt," Nystrom told CNN. "But I really don't give a s**t. Because for the Type I diabetes community and for the 7.5 million Americans who depend on insulin, this is the biggest thing, today, that has happened to the insulin crisis, by shining a light on this topic."

Nystrom will be one of Sanders' guests when he debates Tuesday night, but said her only goal, as she looked around at the cameras and reporters on the bus, was to help bring the issue into the spotlight.

"I have said I will meet with Republicans or Democrats because we need to prevent these senseless deaths," Nystrom said. "The only person who has called me is Sen. Sanders. This isn't about a political endorsement for me. This is about a life or death issue."

Sanders has used this method before. In 1999, he led a van of women across the border to purchase Tamoxifen, a widely-prescribed but expensive breast cancer drug. More than two decades later, making many of the same arguments he used during that first trip, Sanders is continuing to press his case against the pharmaceutical companies and push for the federal government to allow the importation of approved drugs -- a tactic that has bipartisan support, including from the White House.

Speaking to the crowd outside the pharmacy Sunday, Sanders said that as president he would appoint an attorney general who would use anti-trust legislation to address what he described as "collusion" among those few major drug giants.

"Prices go up and up and up at the same level for the same companies," he said. "So what you do is you throw these people in jail if they engage in price-fixing."

Sanders also took aim again at what he described as a tacit partnership between the drug companies and federal legislators, who have been open to free trade for a variety of foreign products, but have so far blocked similar openness when it comes to medication.

"You're getting lettuce and tomatoes coming from Mexico. You're getting the shoes you're wearing, coming from China. You've got poultry coming from all over the world. Yet somehow or another, we have not been able to reimport from Canada into the United States the products being sold in this pharmacy with FDA approval," Sanders said. "And the drug companies that spend hundreds of millions of dollars on campaign contributions, bribing members of the Congress, in essence, who spent billions on lobbying, have been able to prevent us from having prescription drug distributors or pharmacists buying products here in Canada that are a fraction of the price."

Pay the power bill or for pay for a teen's medicine

Sanders' campaign in the run-up to the trip received pushback from the other side of the border. Days earlier, a coalition of 15 Canadian medical professional and patient groups asked their government to protect their pharmaceutical supply. Canada already experiences drug shortages, the group says, and does not have the supply to send medications to the US.

Sanders and the patients on the bus said their trip, and those like it, were "not ideal" and that their broader aim was to drive home to Americans the scale of the patients' suffering. Kathy Sego, who made a 7-hour trip from Indiana with her son, Hunter, who requires insulin and has rationed his intake, became emotional as she described choosing between paying a power bill or for the teen's medicine.

More than 30 million Americans have diabetes, with an estimated 7.5 million requiring insulin, according to the American Diabetes Association. More than 1.5 million of them have Type 1 diabetes. The average price of the drug nearly tripled between 2002 and 2013, the ADA said last year.

Diabetes Canada has been assured by Health Canada that the agency will intervene if Americans' buying insulin poses a risk to Canadians, the research and advocacy group told CNN last week. Diabetes Canada is not aware of any insulin shortages in the country, said Seema Nagpal, a vice president at the group.

At a rally in Detroit on Saturday night, Sanders continued to sharpen his attacks on the pharmaceutical industry.

"If somebody goes out and shoots somebody they're called a murderer, we all agree with that -- put them away," he said. "But what happens if somebody runs a pharmaceutical industry and artificially jacks up the price?"

Asked by CNN's Jake Tapper on "State of the Union" Sunday morning in an exclusive interview, Sanders defended his rhetoric.

"This is a philosophical issue that we have to deal with," he said. "In the case of insulin, people are dying, the cost has soared in recent years and you have three companies that control over 90% of the insulin market."