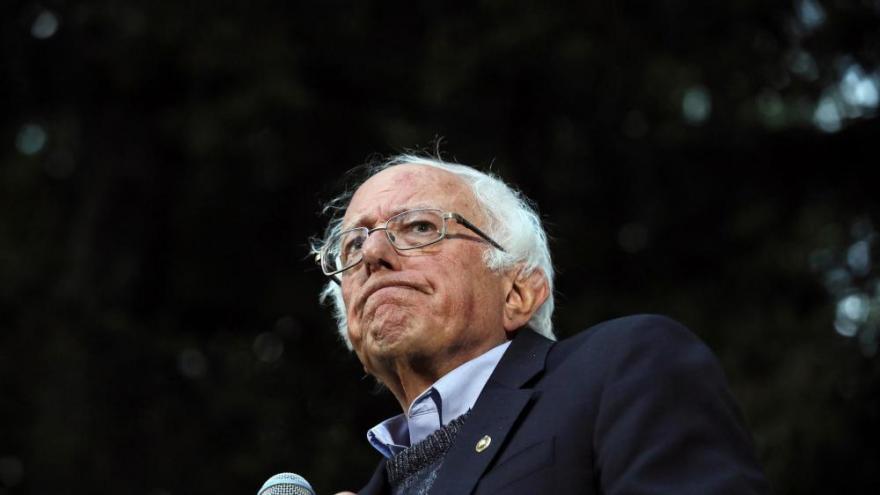 Sen. Bernie Sanders experienced "chest discomfort" and will suspend campaigning "until further notice" after doctors treated a blockage in an artery, senior adviser Jeff Weaver said in a statement.

"Following medical evaluation and testing he was found to have a blockage in one artery and two stents were successfully inserted," Weaver said. "Sen. Sanders is conversing and in good spirits. He will be resting up over the next few days. We are canceling his events and appearances until further notice, and we will continue to provide appropriate updates."

Weaver delivered the news about the senator's health during a conference call around 10:30 a.m. ET, an aide told CNN. He read the statement that was later released and did not elaborate.

Sanders, who is 78 years old, felt the "discomfort" during a campaign event. Despite his age, he has been one of the most active campaigners in the 2020 Democratic primary field.

A campaign aide told CNN that Sanders arrived in Las Vegas on Tuesday at around 5:30 p.m. local time. He then visited the Las Vegas Community Healing Garden to pay tribute on the second anniversary of the October 1, 2017, mass shooting there.

Two cardiologists familiar with the procedure Sanders underwent, but who have not treated him personally, told CNN that the senator's recovery should be swift.

"If a stent is chosen to treat his blocked artery, it's good news in some ways because it must not be that much of a severe diffuse or multiple blockages that would require bypass surgery," said Dr. Roxana Mehran, interventional cardiologist at The Mount Sinai Hospital in New York City.

"Stents are basically a metal caging that keeps the artery open," Mehran added. "Usually these are medicated stents. They've been around for over a decade with huge improvement and we've been able to keep patients out of trouble with the current technology that's available with very little to no recurrence."

Dr. Nieca Goldberg, a cardiologist at NYU Langone Health in New York, also said she suspects Sanders could have a quick recovery.

"Years ago, most patients would stay overnight in the hospital, but there are some circumstances where people get in early enough to get their procedure and they can actually go home the same day," Goldberg said.

"This is a catheter-based procedure. What's most important for people to understand: We're not opening up anyone's chest," she said. "We like people to get up and move the next day. I think we would tell people to take a few days off before they ratchet it up, because we just want the arteries to heal."

A follow-up appointment is typically scheduled in seven to 10 days after the procedure, Goldberg told CNN.

Minutes after the news of Sanders' procedure became public, his campaign rivals responded with an outpouring of support.

"Bruce, Team Warren, and I are sending all our best wishes for a speedy recovery to @BernieSanders," Sen. Elizabeth Warren, one of Sanders' closest allies in Washington, tweeted. "I hope to see my friend back on the campaign trail very soon."

"All of us here at @PeteForAmerica are sending our best wishes for a speedy recovery to Senator @BernieSanders," Buttigieg tweeted. "We're thinking of him and his family today, and I look forward to seeing him back on the campaign trail very soon."

And former Vice President Joe Biden tweeted, ".??@DrBiden?? and I are sending our best wishes to ??@BernieSanders??, Jane, and the whole Sanders family. Anyone who knows Bernie understands what a force he is. We are confident that he will have a full and speedy recovery and look forward to seeing him on the trail soon."