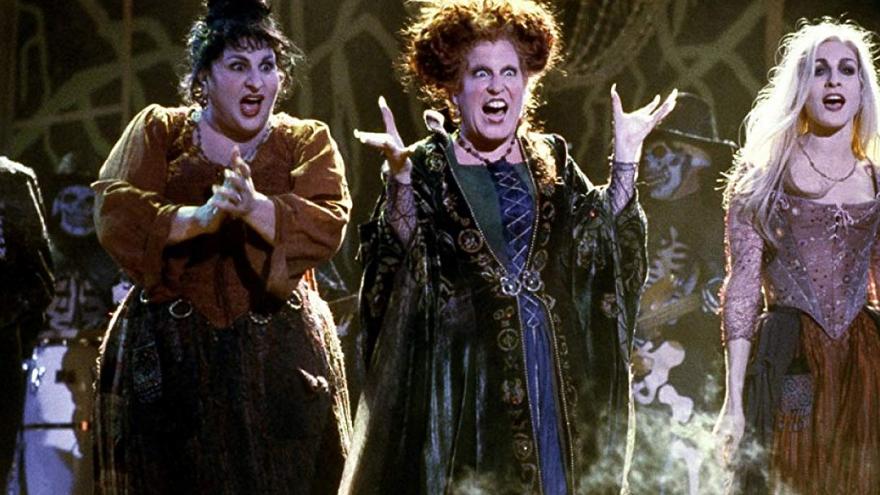 The trio appear in a scene from the 1993 film \"Hocus Pocus.\" Credit: Disney
By Chloe Melas, CNN

(CNN) -- This might be the best thing that's happened to Halloween.

Bette Midler, Sarah Jessica Parker and Kathy Najimy have reprised their roles as the Sanderson sisters from the hit 1993 movie, "Hocus Pocus."

Midler on Sunday shared a behind-the-scenes photo of herself alongside Parker and Najimy in character on her Instagram, and social media erupted into a frenzy.

Midler put it best in her caption, "'In Search of the Sanderson Sisters' is the best thing to happen to #Halloween since Hocus Pocus + Reeses Pieces!"

The film has become a cult classic, and fans have been begging for a sequel for years. There's reportedly one in the works over at Disney+.

But the latest reunion wasn't for a new movie; it's for Midler's annual fundraiser known as Hulaween, benefiting her nonprofit, the New York Restoration Project, which works to restore gardens and parks in New York's five boroughs.

This year's event, "In Search of the Sanderson Sisters: A Hocus Pocus Hulaween Takeover," is virtual due to the Covid-19 pandemic.

Although it's unclear what the stars have in store, they've clearly already put a spell on their fans.