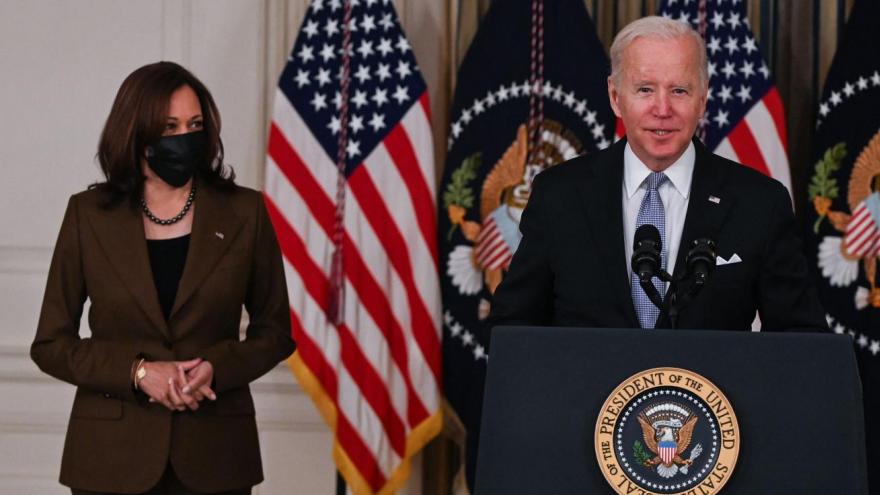 (CNN) -- The Biden administration announced a new set of immediate and short-term actions Tuesday aimed at alleviating supply chain issues at the nation's ports, waterways and freight networks as the administration takes steps to implement the newly passed, but not yet signed, bipartisan infrastructure bill.

The news comes days after the bipartisan infrastructure package passed Congress and one day before President Joe Biden's trip to the Port of Baltimore to promote the bill. Biden has not yet signed the bill into law, and the date for a signing ceremony is not yet set as the White House has signaled they will wait until Congress returns next week for an event.

But some efforts toward implementation are "already underway ... even before the bill is signed," a senior administration official told reporters on a briefing call. Pressed on timing, the official said that "there is work going on right now to actually get these projects teed up, get these programs teed up and out the door."

The actions announced Tuesday include flexibility for port grants through the Department of Transportation to solve supply chain disruptions, funding for a pop-up container yard project underway at the Port of Savannah, a $420 million grant program for ports and marine highways that will be launched within the next 45 days and identifying coastal and waterway projects for $4 billion in funding for US Army Corps of Engineers construction.

It will also prioritize identifying key US ports of entry for $3.4 billion of modernization and expansion projects within 90 days, and open competition for $475 million in port infrastructure grants through the bipartisan bill within 90 days.

"The entire goods movement system is assisted greatly through the bipartisan bill," the official said.

The Savannah, Georgia, grant reallocation in particular, the senior official said, will provide "immediate relief" ahead of the holiday season, noting it "can be operational in 30 to 45 days." Most of the other actions announced Tuesday, the official said "are relatively-short term programs and projects," with "much more to follow."

Biden's Wednesday Baltimore visit, the official said, is "an illustrative example" of the private-public partnership at the nation's ports.

The Baltimore visit will also be near the 127 year-old Howard Street Tunnel, which "only accommodates single stack containers right now. It "will be expanded to accommodate double stack containers from the Port of Baltimore all the way out to the Midwest," in a project co-funded by federal, state, and private partners, the official said.

"It's an example of the kind of investments that are needed for both the private and public sector side. It's also an illustration that the co-funding in the bipartisan infrastructure plan incentivizes the private sector to make these kinds of long-term investments, as well," the official added.