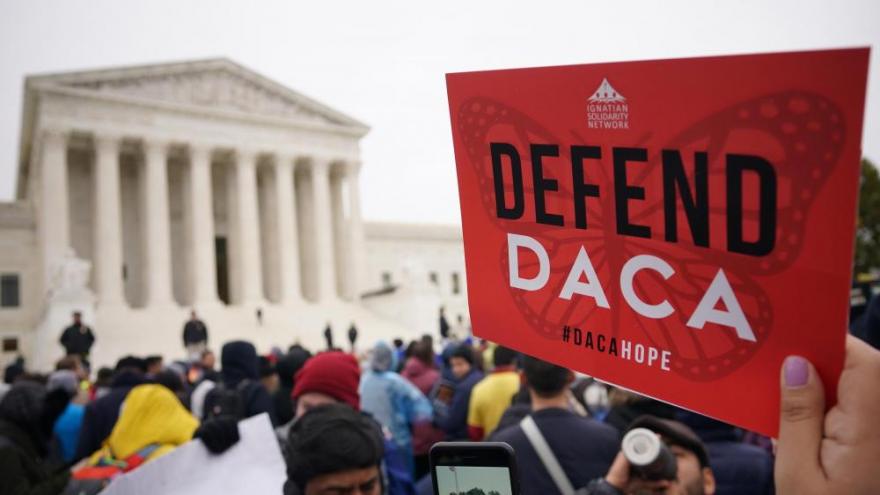 (CNN) -- The Biden administration appealed on Friday a Texas court ruling that found the Obama-era Deferred Action for Childhood Arrivals program unlawful -- injecting fresh uncertainty into the lives of thousands of immigrants.

The Justice Department filed a notice to appeal US District Judge Andrew Hanen's ruling, kicking off the appeals process in the 5th US Circuit Court of Appeals, an extremely conservative appeals court.

DACA, created in 2012, was intended to provide temporary reprieve to undocumented immigrants who were brought to the United States as children, a group often described as "Dreamers." Recipients, many of whom are now adults, also receive certain work authorizations.

In July, Hanen, of the Southern District of Texas, ruled that DACA violated the Administrative Procedure Act, which dictates what procedures agencies must go through to implement certain policies. He blocked the government from approving new applications for the program, but his order allowed the program to continue for current enrollees while the case is litigated. Since the ruling, a proposed DACA regulation has been submitted to the Office of Management and Budget.

At a CNN townhall over the summer, President Joe Biden, when asked about the DACA ruling, said he's "not letting this go" and that the Justice Department would appeal the ruling. "They come here with really no choice and they're good, good people," Biden said, referring to the so-called Dreamers who are eligible for the program.

As of March 31, there were 616,030 DACA recipients, the majority of whom are from Mexico. Hanen stayed his order for current DACA recipients. As long as that stay is in effect, those recipients can renew, a process that happens every two years.

But the Covid-19 pandemic and other factors have created a severe backlog of applications and under Hanen's ruling, those applications from those not currently on DACA cannot be approved. The backlog of new applications was, as of March 31, more than 55,000.

The case has put additional pressure on Congress, where Democrats are trying to include a pathway to citizenship for millions of undocumented immigrants in a budget reconciliation bill. That population includes immigrants who were brought to the US as children, those with Temporary Protected Status and essential workers.

By passing an immigration measure using budget reconciliation, Democrats can approve it using a simple majority in the Senate, with all 50 Democratic senators voting in favor of it and Vice President Kamala Harris likely being the tie-breaking vote. But first, Democrats need to get the approval of Senate Parliamentarian Elizabeth MacDonough, who is responsible for advising the chamber on how its rules, protocols and precedents operate.

Without congressional legislation, the current DACA case sets up another high-stakes legal clash over immigration.

While it is unclear whether this case will end up before the Supreme Court, in a previous DACA-related case last year, three justices signaled in a dissent their belief that the program is unlawful. The full court has not yet weighed in on DACA's legality.