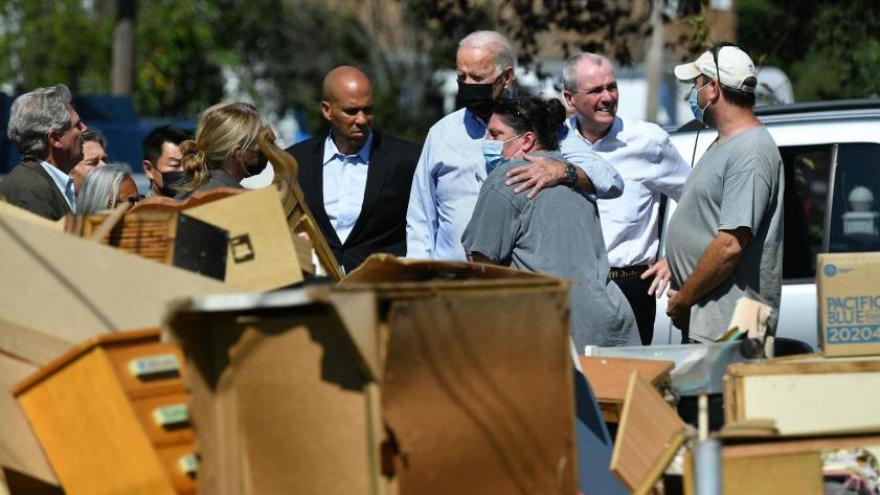 The Biden administration wants billions of dollars for extreme weather recovery efforts and the resettlement of Afghan refugees in its proposal to keep the government funded past September 30, and pictured, Senator Cory Booker with President Joe Biden in New Jersey on September 7.

(CNN) -- The Biden administration is asking for billions of dollars for "urgent" extreme weather recovery efforts and the resettlement of Afghan refugees in its proposal to keep the government funded past September 30.

In a Tuesday afternoon call with reporters, administration officials detailed the billions of dollars the White House is requesting from Congress in addition to the general appropriations necessary to keep the government running. Among the asks: Funding for Covid testing for migrants at the border, billions for Afghan refugees and the evacuation process and authorities to allow the Department of Homeland Security to tap into disaster recovery funds to help respond to catastrophes.

The officials, who declined to be named, called on Congress to appropriate more than $14 billion to aid with recovery and "unmet needs" from recent natural disasters, including wildfires and storms, plus at least $10 billion to deal with the aftermath of Hurricane Ida. Administration officials are also asking for $6.5 billion in funding for Afghan refugees.

The proposal comes as the White House faces several critical battles in Congress over the next several weeks.

The fight over funding the government past September 30 is turning into a high-stakes fight with the full faith and credit of the United States on the line. Not only will there be much-needed money for Afghan evacuees and to help with natural disasters at stake, but there also will likely be a fight over raising the national borrowing limit. Democrats have not said if they will attach the debt ceiling hike to the bill to keep the government open, but they are widely expected to do that -- and dare the GOP to block it and risk a government shutdown in the process.

There is also a major showdown coming over the President's infrastructure agenda. White House officials are ramping up their efforts to unify Democrats behind Biden's sweeping $3.5 trillion social safety net expansion, stressing a combination of urgency and opportunity. Kate Bedingfield, the White House communications director, laid out a series of key elements in the package -- specifically those officials believe are the most popular with the public -- in a three-page memo sent Tuesday to top House Democratic aides.

"We face a fundamental choice in America right now as we rebuild our economy: this time, will everyone get in on the deal?" Bedingfield wrote in the memo obtained by CNN. "President Biden knows whose side he's on: the backbone of this country, the middle class."

The memo comes as White House officials have worked feverishly to help craft the details of the draft proposal, which is expected to include key Democratic priorities like paid leave, free community college and universal pre-kindergarten. But the messaging element has been a point of contention, as some moderate Democrats have raised concerns about the scale and scope of the proposal in recent weeks.

"The time is now," Bedingfield writes in the memo. "We have to meet the needs in front of us. Not tomorrow, not months from now, not next year. Right now. America's working families deserve opportunity and nothing less."

The Biden administration is also asking Congress to separately pass $150 billion for clean energy and climate change resilience funding in its bipartisan infrastructure bill, which has yet to pass the House of Representatives.

The amount of funding for hurricanes in the request sent Tuesday is a recognition of the extent of the devastation from climate change-fueled disasters, including fires, hurricanes and floods.

"Climate change is producing more severe natural disasters like storms and wildfires," one of the administration officials said on the call. "We need to do more to help states recover from recent and ongoing natural disasters. They have many unmet needs."

Biden toured flood damage in New Jersey and New York caused by the remnants of Hurricane Ida. He said that storm damage was worsened by climate change.

"Every part of the country is getting hit by extreme weather, and we're now living in real time what the country's gonna look like," Biden said as he toured flooding devastation in New Jersey on Tuesday. "We can't turn it back very much but we can prevent it from getting worse."

The purpose of the budget guidance sent to Congress, Office of Management and Budget acting Director Shalanda Young wrote in a blog post, "is to advise lawmakers on how to avoid severe disruptions to public services that could inadvertently arise from extending the previous year's appropriations legislation without modifications."

"We are also calling on Congress to include additional funding in a CR to help address two other urgent needs: responding to recent and ongoing natural disasters, and meeting our commitments to our Afghan allies and partners," Young wrote.

Administration officials are also asking for $6.5 billion in funding for Afghan refugees.

One of the officials said the government is expecting 65,000 Afghan refugees to arrive in the US by end of September and another 30,000 over the next 12 months. The funding request underscores the sheer demand for resettlement resources in the United States -- an infrastructure that was decimated under the Trump administration.

"We know there's bipartisan support for helping Afghan partners who supported us for so long," the official said.

They added the funding was "certainly critical ... to make sure that we are fulfilling this bipartisan commitment our Afghan allies and partners."

That request also includes millions in "targeted funding" for at-risk Afghans still in the country.

Young also "strongly" urged Congress to include that funding in the bill.

"The operation to move out of danger and to safety tens of thousands of Afghans at risk, including many who helped us during our two decades in Afghanistan, represents an extraordinary military, diplomatic, security, and humanitarian operation by the US Government," Young wrote.

She continued, "We urge Congress to appropriate $6.4 billion to enable the success of this multifaceted, historic mission."

The majority of those funds, she said, will go toward processing sites overseas run by the Departments of Defense and State, plus humanitarian assistance through State and USAID. It also includes funds for public health screenings, vaccinations, and other resettlement resources through State and the Department of Health and Human Services.