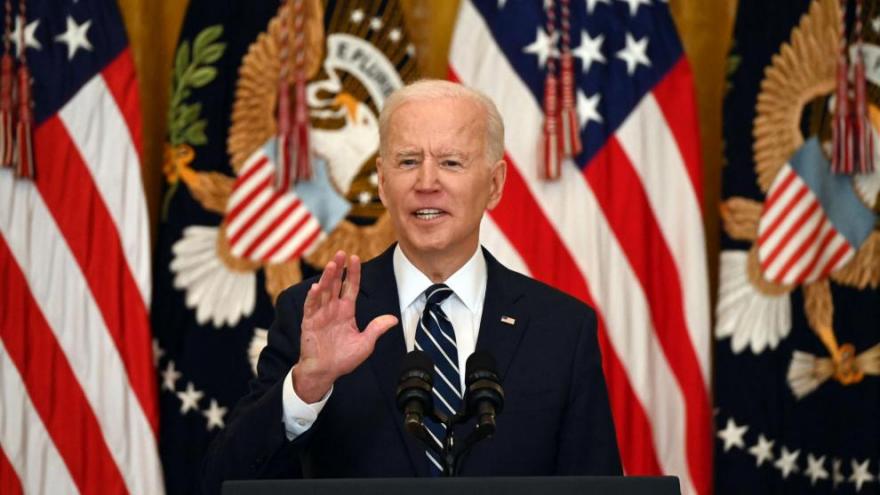 US President Joe Biden answers a question during his first press briefing in the East Room of the White House in Washington, DC, on March 25.

"I can confirm that we've completed our (Democratic People's Republic of Korea) policy review, which was thorough, rigorous and inclusive. We consulted closely with outside experts and our predecessors from several previous administrations, and our way forward draws from their lessons learned and shared," Psaki told reporters aboard Air Force One in response to a question from CNN's Arlette Saenz.

The administration's goal, she said, is complete denuclearization of the Korean Peninsula "with a clear understanding that the efforts of the past four administrations have not achieved this objective."

The US policy going forward, she said, will be a "calibrated, practical approach."

"Our policy will not focus on achieving a grand bargain, nor will it rely on strategic patience. Our policy calls for a calibrated practical approach that is open to and will explore diplomacy with the DPRK, and to make practical progress that increases the security of the United States are allies and deployed forces," she said.

In March, North Korea carried out its first weapons test since Biden became president, launching two projectiles in a move senior administration officials downplayed as falling "on the low end of the spectrum" of provocative actions the regime could carry out.

The test had been widely expected. One US official told CNN that North Korea had launched short-range projectiles, possibly artillery or cruise missiles, not ballistic missiles -- a key distinction that underscores the Biden administration's view that it does not qualify as a serious breach and will not prevent the US from pursuing diplomacy with Pyongyang.

Following a second launch in a week in March, Biden warned that there would be "responses" if North Korea continues to fire ballistic missiles.

That month, North Korean state media claimed the country had added a new guided missile to its arsenal.

As they have been conducting this North Korea policy review, US officials have engaged in heavy consultation across the government and in Asia, as well as high-level consultations with former Trump administration officials. The end of the review comes after President Joe Biden met with Japanese Prime Minister Yoshihide Suga, and one day after the White House announced Biden will be meeting with South Korean President Moon Jae-in on May 21.

The US has been in "close touch with allies and partners" throughout the review process. Biden discussed it with Suga while he was in Washington, Psaki said, adding that it's been discussed at "every level."

On Thursday, the top US general met his South Korean and Japanese counterparts in Hawaii. Among the topics discussed, Joint Chiefs Chairman Gen. Mark Milley and other top military officials in the region shared concerns about North Korea's nuclear and ballistic missiles program.