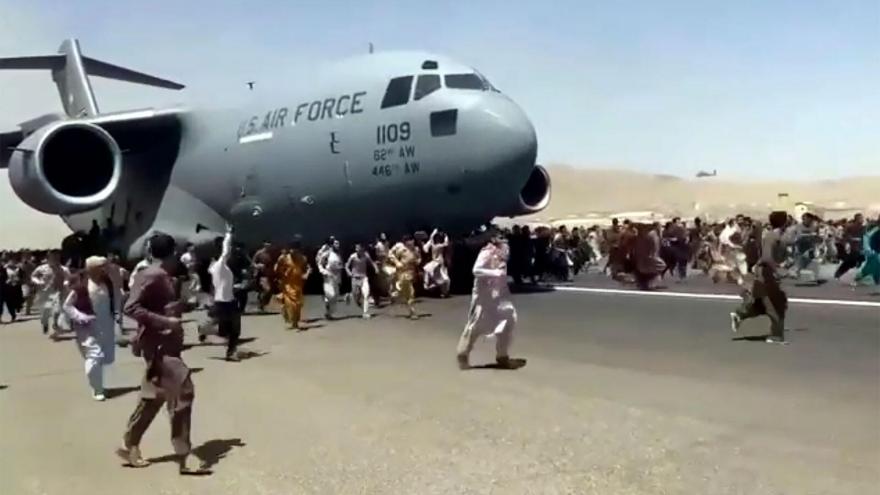 (CNN) -- The Biden administration is still struggling to answer basic questions about whether it can successfully evacuate tens of thousands of Americans and vulnerable Afghans in a race against a ticking clock ahead of the US military's August 31 Afghanistan withdrawal date.

On Tuesday, US officials across the government provided some details about plans for the massive US evacuation. But many key specifics remain unanswered, including exactly how many Americans are still in Afghanistan, how many Afghans the US military believes it can evacuate and whether the plan will extend beyond the withdrawal deadline just two weeks away.

At a White House briefing, national security adviser Jake Sullivan said the US is relying on a commitment from the Taliban to allow for safe passage to the airport in Kabul, though it's still unclear whether the Taliban will allow Americans -- let alone Afghan citizens trying to escape -- to reach the airport.

In an interview with CNN's John Berman Tuesday morning, Pentagon press secretary John Kirby would not say whether the US military was prepared to "go out into the countryside" to aid those who need to reach to Kabul, acknowledging the military was only operating at the airport.

Also on Tuesday, US officials gave differing answers about how many Americans remain in Afghanistan. Kirby said Tuesday morning it was 5,000-to-10,000, White House press secretary Jen Psaki said in the afternoon that it was in fact 11,000, while congressional aides were told by State Department and Pentagon officials the number was actually between 10,000 and 15,000, according to three sources familiar with the briefings.

Some Americans were told to head to the airport, while others were instructed to continue sheltering in place.

The Biden administration has yet to put a number on how many Afghans it expects to evacuate -- there were roughly 20,000 applicants in the Special Immigrant Visa program pipeline as of mid-July, in addition to their families and other vulnerable Afghans seeking to escape -- and where these Afghans will be relocated.

The rush of people trying to evacuate as the Taliban swiftly took control of Kabul over the weekend led to chaotic scenes at the airport Monday of people desperately trying to escape, including several falling to their deaths as they clung to the departing aircraft. The US military since gained control of the security situation at the airport, but things outside remained frantic Tuesday, with a crush of people at the gate still trying to get inside.

In another sign of chaos, Afghan passports of visa applicants at the US embassy were destroyed amid the rapid US closure of the facility, one lawmaker said.

A commitment from the Taliban

After facing sharp criticism for not prioritizing evacuations of vulnerable Afghans more quickly in the weeks after he announced the withdrawal of all US forces from Afghanistan in April, President Joe Biden has made the hurried evacuation a priority for the military's final mission before its drawdown is complete.

The Biden administration says it is doing everything it can, but officials won't give clear goals for how many people they want to get out of the country given the chaotic environment.

It's also still unclear whether Biden would keep US troops in Afghanistan beyond August 31 if needed to continue the evacuations. Sullivan, who faced 45 minutes of questions from the White House podium Tuesday about the Biden administration's plans in Afghanistan, said the US was talking to the Taliban about the exact timetable. He declined to say whether the US was considering extending the withdrawal beyond the end of the month.

"I'm not going to comment on hypotheticals. I'll stay focused on the task at hand, getting as many people out as rapidly as possible and take that day by day," Sullivan said. "The Taliban have informed us they are prepared to provide the safe passage of civilians to the airport and we intend to hold them to that commitment."

Sullivan reiterated in a tweet Tuesday evening the US intended to evacuate all Americans from Afghanistan.

But with Afghanistan in the hands of the Taliban, it remains unclear precisely how many Afghans the administration can and will evacuate, and who will ultimately qualify for those government flights.

The State Department is still determining how to prioritize evacuations on US military flights as it still scrambling to put together a list of Afghans to be evacuated under the SIV program and through other visas.

US officials at the airport continue to work out a plan for who gets evacuated amid the chaos of Afghans clamoring to leave, one source said.

There are tens of thousands of Afghans who have applied for the Afghan SIV program, and processing their applications can take years.

The first tranche of US citizens were notified to get to the Kabul airport for an evacuation flight, but the State Department said others should remain sheltered in place until they receive instructions to depart.

Those Americans are spread out all over the country, and the officials said it is now up to those citizens to find their own way to Kabul airport -- the officials insisted they had been "messaging" to US citizens to depart Afghanistan "for a long time," and that many had decided not to try to leave sooner.

Asked about those who have been notified about flights but cannot get to the airport, State Department spokesman Ned Price said Tuesday, "If they feel that it is unsafe for them to make their way to the airport, they should not seek to do so.

"We will continue to do all we can to, and we will continue to be in touch with them, I should say, to provide clear guidance about when and how they should make their way to the airport compound," Price added.

US officials said they've made clear to the Taliban not to interfere with the US evacuation efforts, though they acknowledged there have been reports of people being turned away or even beaten. Still, Sullivan answered "yes" when asked if he believed the Taliban's commitment and said by and large Afghans have been able to get to the airport.

Gen. Frank McKenzie, the commander of US Central Command, visited the Kabul airport on Tuesday, saying that operations were being rapidly scaled up. "In meetings with Taliban senior leaders in Doha on Sunday, I cautioned them against interference in our evacuation, and made it clear to them that any attack would be met with overwhelming force in the defense of our forces," McKenzie said.

The Pentagon said Tuesday it expects to be able to evacuate 5,000-to-9,000 passengers per day once the evacuation at the airport is running at full steam. US military flights on Tuesday "evacuated approximately more than 1,000 people, including 330 U.S. citizens and permanent residents," Price said in a statement Tuesday.

Price said the US has "evacuated more than 3,000 people so far, including our personnel," and has relocated nearly 2,000 Afghan special immigrants to the United States.

'We are going to have to take people'

In the US, congressional offices have been fielding a multitude calls from constituents with relatives and friends at various stages of the visa process who are now desperately trying to leave Afghanistan, as well as US citizens who are stuck and unsure if they can get beyond Taliban checkpoints to make it to the airport.

The office of Rep. Andy Kim, a New Jersey Democrat, told visa applicants visa and passport appointments at the US embassy in Afghanistan, which has been closed and move to the airport, had been canceled -- and that passports in the embassy's possession had been destroyed, seemingly making it more difficult for those Afghans to be able to leave the country.

The State Department did not respond to a request for comment about the passports. It is unclear why the passports were destroyed but it is possible that diplomats determined that it would have been dangerous for the documents to fall into the hands of the Taliban, who could then target those Afghans.

"We are going to have to take people without passports and vet them in other ways, like with their phone numbers for example, said Rep. Tom Malinowski, a New Jersey Democrat and former State official. "Any Afghans braving the trip to the airport will not have wanted to go there with identifying documents, anyway."

Rep. Gerry Connolly, a Virginia Democrat, said his office has opened more than 70 cases for constituents with relatives and friends stuck in Afghanistan in the SIV program trying to escape, and his aides are trying to get them into the system for processing.

"What we're trying to press upon the State Department and other federal agencies is, let's not be overly concerned about documentation, some of these people fled without their documents and we need to focus on getting as many of the people involved out of their as quickly as we can," Connolly told CNN.

'Nobody thought this was going to happen'

In the meantime, Afghans who worked for the US are living in fear, desperate to try to get themselves and their loved ones to safety.

Ahmad Shah Mohibi, who worked in Afghanistan as a translator with the US military, says he's trying to evacuate his parents. Although they received preliminary visa approval, the process has been slow, and it was delayed even further by curtailing of services at the US Embassy. Now, with the embassy operating out of the airport with only limited staff, it's unclear how the State Department will handle their case.

Mohibi was 16 years old when he began working with the U.S. military at Camp Phoenix in Kabul. He provided an identity document that showed his age as 19, he said. He had learned English by taking classes and by memorizing manuals his father brought home from his work.

Now based in the US, he has tried in recent years to persuade his parents to leave Afghanistan, he says.

"My mom is scared of airplanes," he says. "Nobody thought this was going to happen like this."

Mohibi says he's also applied for visas for other family members in Afghanistan, but those are on a slower track under US visa rules that could take years.

His fears for his family are real because the Taliban seem to know who he is. The Taliban spokesman blocked him on Twitter because he has spoken out about civilian atrocities the group has carried out in its drive to retake power.