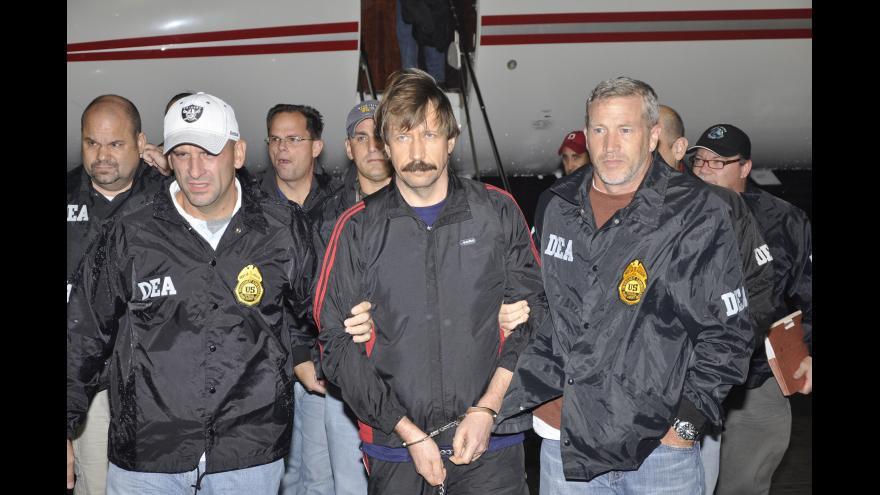 Former Soviet military officer and arms trafficking suspect Viktor Bout is seen here in November 2010 in White Plains, New York. The Kremlin said on July 28 that "so far, there is no agreement" on a proposed US prisoner swap.

(CNN) -- Biden administration officials are frustrated that Moscow has yet to respond in a meaningful way to their proposal to release convicted Russian arms trafficker Viktor Bout and secure the release of US citizens Brittney Griner and Paul Whelan.

The Kremlin said Thursday that "so far, there is no agreement" on the possible offer by the US.

"So far, there is no agreement on this issue," Kremlin spokesperson Dmitry Peskov said during a conference call with journalists when asked about the offer.

US Secretary of State Antony Blinken said Wednesday that he expected a call with Russian Foreign Minister Sergey Lavrov, his counterpart in the country, this week to discuss a "substantial proposal" presented to Moscow "weeks ago" to try to secure the release of Whelan and Griner, who are classified as wrongfully detained. Blinken told reporters he hopes that by speaking with Lavrov, "I can advance the efforts to bring them home."

Frustration at Russia's lack of substantive response to the deal was an underlying factor in the administration's decision to publicize that an agreement from the US is on the table.

"We communicated a substantial offer that we believe could be successful based on a history of conversations with the Russians," a senior administration official told CNN Wednesday.

However, there was acknowledgment within the administration that negotiations to try to free detained Americans are often difficult.

"We start all negotiations to bring home Americans held hostage or wrongfully detained with a bad actor on the other side. We start all of these with somebody who has taken a human being American and treated them as a bargaining chip," the senior official said.

"So in some ways, it's not surprising, even if it's disheartening, when those same actors don't necessarily respond directly to our offers, don't engage constructively in negotiations," they said.

Asked Thursday about Blinken's comments, Peskov said, "Well, look, since there are no agreements now that would be finalized, then, accordingly, I have nothing more to add to what has been said."

CNN previously reported that the plan to exchange Bout for Whelan and Griner received the backing of President Joe Biden after being under discussion since earlier this year, according to sources briefed on the matter. Biden's support for the swap overrides opposition from the Department of Justice, which is generally against prisoner trades.

Among senior Biden administration officials, the idea of prisoner swaps gained new momentum earlier this year after the successful release of Trevor Reed, a former Marine who was held captive in Russia for more than two years. Reed was traded for Konstantin Yaroshenko, a Russian pilot then serving a 20-year federal prison sentence for cocaine smuggling conspiracy.

A senior administration official suggested Moscow has not been responsive to the "substantial offer" first presented in June, telling CNN "it takes two to tango."

"We start all negotiations to bring home Americans held hostage or wrongfully detained with a bad actor on the other side. We start all of these with somebody who has taken a human being American and treated them as a bargaining chip," the official said. "So in some ways, it's not surprising, even if it's disheartening, when those same actors don't necessarily respond directly to our offers, don't engage constructively in negotiations.

The families of WNBA star Griner, jailed in Moscow for drug possession since February, and Whelan, who has been held by Russia for alleged espionage since 2018, have pleaded with the Biden administration to secure their release, including via a prisoner exchange if necessary.

Kirby offered some new details Thursday on the decision to go public with the proposal but did not offer any updates on its status.

"We have made that decision seriously, in terms of whether we were going to go public with it, and I could just tell you that there was a lot that went into that decision. A lot of context here, both in terms of what was happening, what wasn't happening, and certainly in the context of Mrs. Griner having to testify yesterday," Kirby said during an appearance on ABC's "Good Morning America."

Kirby continued: "There was an awful lot of discussion about whether we should even acknowledge that there was a proposal but ultimately, we came down on the side that it was important to put this out there ... the American people know how seriously President Biden takes his responsibilities to bring American citizens home when they've been unjustly detained. But we also thought it was important for the world to know how seriously America takes that responsibility."

Griner, who pleaded guilty earlier this month but said she unintentionally brought cannabis into Russia, testified in a Russian courtroom Wednesday as part of her ongoing trial on drug charges, for which she faces up to 10 years in prison. It is understood that her trial will have to conclude prior to a deal being finalized, according to US officials familiar with the Russian judicial process and the inner workings of US-Russia negotiations.

This story and headline have been updated with additional reporting.