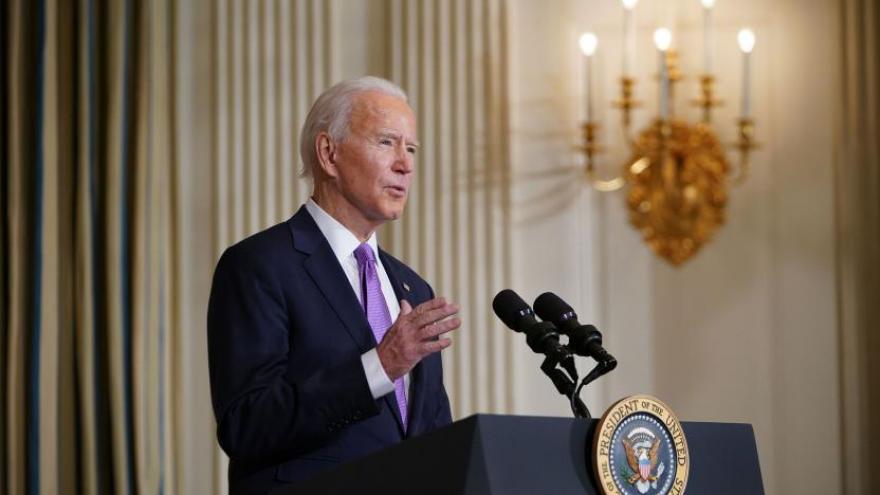 The Biden administration has paused arms sales to Saudi Arabia and the United Arab Emirates. President Joe Biden here speaks at the White House in Washington, D.C. on January 26, 2021.

(CNN) -- The Biden administration has paused arms sales to Saudi Arabia and the United Arab Emirates as it conducts a wider review of agreements worth billions of dollars made by the Trump administration, sources familiar with the matter told CNN Wednesday.

Secretary of State Tony Blinken confirmed that pending arms sales are under review, as is typical at the start of a new administration, "to make sure that what is being considered is something that advances our strategic objectives, and advances our foreign policy."

He did not reference any specific sales or countries in his remarks, which were made at his first State Department news conference as top US diplomat.

The move to freeze the pending sales to the Gulf allies could signal a change in approach by the Biden administration after the Trump administration approved major sales in the last months of its tenure.

Gulf nations that have sales in the pipeline had expected some sort of pause for the administration to review but the practical impact isn't clear yet, a source familiar with Gulf nations' thinking said.

A State Department official earlier described the pause as "a routine administrative action typical to most any transition, and demonstrates the administration's commitment to transparency and good governance, as well as ensuring US arms sales meet our strategic objectives of building stronger, interoperable, and more capable security partners."

The official also did not highlight specific countries in their comment.

The Wall Street Journal was first to report on the pause.

Democrats in Congress immediately came out in favor of the move.

"The weapons we sold to Saudi Arabia and UAE have been used to kill schoolchildren, transferred to extremist militias, and fueled a dangerous arms race in the Middle East," tweeted Sen. Chris Murphy. "This is the right move. The time is now to reset our relationships with Gulf allies."

Incoming Senate Foreign Relations Committee Chairman Bob Menendez, a New Jersey Democrat, said he welcomed the pause in the sales, which he said "were inexplicably rushed without thorough review of implications for U.S. national security and protection of innocent lives in Yemen."

"I encourage the Biden Administration to carefully consider the broader regional security implications of these sales and to consult with Congress as it continues its due diligence on these and other arms sales," he said on Twitter.

On Tuesday, a group of Democratic lawmakers sent a letter to Blinken calling for scrutiny and overhaul of the US-Saudi relationship, and among other requests, urged him to freeze the delivery of offensive weapons to Saudi Arabia.

At the end of last year, the Trump administration pushed through a number of high-dollar arms sales to Riyadh and Abu Dhabi tied to the Abraham Accords, which were agreements to normalize relations with Israel.

The former administration also issued an emergency declaration in 2019 in order to expedite arms sales to Saudi Arabia and the UAE in circumvention of congressional concerns.

Lawmakers opposed the sale due to Saudi Arabia and the UAE's involvement in the bloody conflict in Yemen that has killed thousands of civilians, as well as the killing of journalist Jamal Khashoggi at the hands of Saudi officials. They did not see any emergency that justified speeding up the transfer.

A State Department Office of Inspector General report found the agency complied with legal requirements in declaring the emergency, but did not fully assess the risks to civilians associated with that sale.

A CNN investigation in February 2019 found that Saudi Arabia and the UAE had given US-made equipment to al Qaeda-linked fighters, hardline Salafi militias, and other fighting factions in Yemen, despite agreements with Washington.

During his confirmation hearing Blinken did not commit to halting the delivery of all offensive weapons to Saudi Arabia or the UAE, but he did say that the Biden administration would stop supporting the Saudi military campaign in Yemen.

"The President-elect has made clear that we will end our support for the military campaign led by Saudi Arabia in Yemen. And I think we will work on that in very short order, once the President-elect is president," he said at the hearing a day before the inauguration.

He also expressed particular concern about the designation of Yemen's Houthi rebels as a foreign terrorist organization and related sanctions, telling reporters Wednesday, "It's vitally important even in the midst of this crisis that we do everything we can to get humanitarian assistance to people of Yemen, who are in desperate need."

"We're taking a very urgent and very close look at that. We want to make sure that not only are American aid groups able to do what they can to provide assistance but so are aid groups around the world that are providing the bulk of that assistance and to make sure that nothing we are doing interferes with that, particularly if it doesn't in any other way advance our policy and objective. So that's the priority in my book," he said.

CNN reported last week that the State Department had begun its review of the designation.