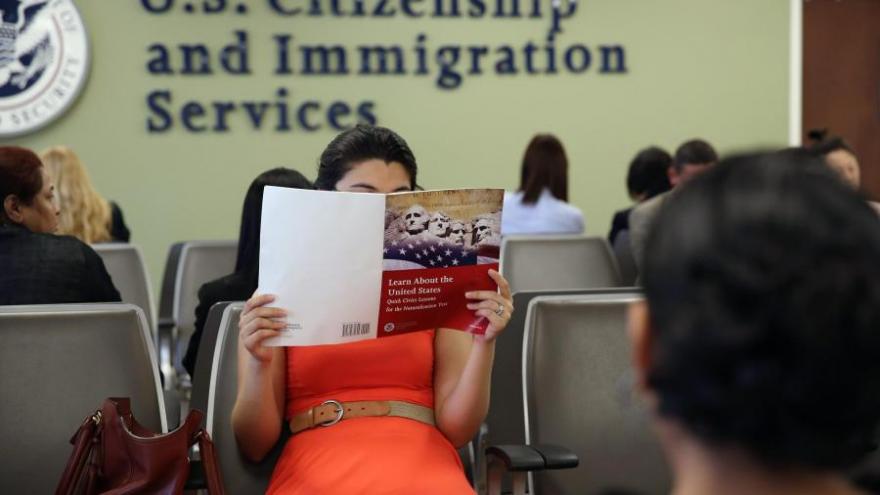 The Citizenship and Immigration Services administers an immigration test for those naturalizing to the United States.

(CNN) -- The Biden administration is rolling back the controversial Trump-era naturalization civics test, reverting to a prior version of the exam, according to a policy alert published Monday.

US Citizenship and Immigration Services, which administers the test, announced it will go back to using a 2008 version. The agency had received thousands of comments on the Trump administration's exam, as well as President Joe Biden's executive order on restoring faith in the legal immigration system.

At the time, immigration experts warned it could slow down the process and discourage people from seeking citizenship and legal immigration benefits.

The Trump-era test may "inadvertently" create potential barriers to the naturalization process, the Biden administration determined.

USCIS declined to elaborate on why the administration believes the 2020 test needs to be tossed out. News that the Biden administration was planning to ditch the Trump-era exam was first reported by BuzzFeed News.

Over the course of his presidency, Donald Trump tried to curtail legal immigration and doubled down on citizenship, teasing an end to birthright citizenship and attempting to include a citizenship question on the census.

The naturalization exam is a crucial step to an immigrant's path toward US citizenship, potentially impacting hundreds of thousands of immigrants who seek citizenship annually.

Multiple comments on the Trump-era test noted that there was little advance notice before its implementation, raising concerns about limited time for study and preparation of training materials and resources, according to the USCIS policy alert.

The update goes into effect on March 1 and there will be a brief period during which the agency may offer both versions of the test to accommodate applicants who were already studying for the Trump-era version.

USCIS, a part of the Department of Homeland Security, was at the center of several of the Trump administration's hardline immigration policies, including ones that made it exceedingly difficult for migrants to seek asylum in the US and the controversial "public charge" rule, which makes it harder for immigrants to obtain legal status if they use public benefits.

Ken Cuccinelli, a former top DHS official in the Trump administration, brought the agency into a rare spotlight when he served as acting USCIS director, working to rebrand it as an vetting agency rather than a benefits one.

Cuccinelli touted the efforts by the Trump administration to revise the test.

"Updating, maintaining, and improving a test that is current and relevant is our responsibility as an agency in order to help potential new citizens fully understand the meaning of U.S. citizenship and the values that unite all Americans," Cuccinelli said in a statement when the agency announced it would revise the naturalization exam.