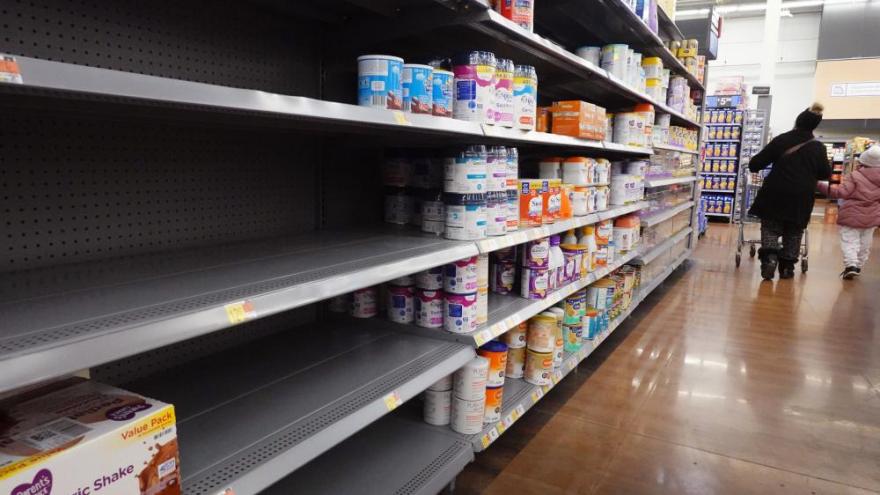 Baby formula is offered for sale at a big box store on January 13 in Chicago, Illinois. Baby formula has been is short supply in many stores around the country for several months.

(CNN) -- The Biden administration announced Thursday that it had secured its first batch of infant formula from overseas and was preparing to fly it through the newly created Operation Fly Formula program, as White House officials face pressure to provide important details on how they will implement their recently announced efforts to alleviate the national shortage.

Earlier in the day, senior administration officials could not provide specifics on how they would carry out their latest plans, saying they were in ongoing discussions with manufacturers about how to proceed.

President Joe Biden announced on Wednesday that he would be invoking the Defense Production Act, which allows the government more control over industrial production during emergencies, to direct suppliers of formula ingredients to prioritize delivery to the manufacturers of formula. And he established Operation Fly Formula, which directs the Department of Health and Human Services and the Department of Agriculture to utilize the Defense Department's commercial planes to import formula from abroad.

The first plane being utilized for the operation is anticipated to leave from Switzerland in the coming days, an administration official said. However, the Department of Defense is still working to identify commercial aircraft that would transport the formula from Zurich to Plainfield, Indiana.

Upon arrival in Indiana, the formula will be distributed to the places with the most acute needs, but the official was unable to preview the distribution process.

The administration has finalized agreements with Nestle to transfer the equivalent of up to 1.5 million eight-ounce bottles of formula from abroad, the White House announced Thursday evening. This includes three types of formula brands -- Alfamino Infant, Alfamino Junior and Gerber Good Start Extensive HA. Each of the types of formula are hypoallergenic for children that are allergic to cow milk. This is particularly significant given that some parents of infants in the US with dietary restrictions have struggled to find special formula that meets their children's needs.

The Biden administration has not announced where the Defense Production Act will be invoked to direct formula supplies to manufacturers.

Officials have cautioned that invoking the DPA isn't a "magic wand" and won't increase supply instantly. And officials had also debated internally about whether invoking it would move the needle significantly on production before eventually deciding to move forward.

On Thursday, a senior administration official said the administration remains in ongoing conversations with companies about the specific ways the DPA and the operation to import formula from abroad with federal resources will be used.

"We are still having active and ongoing conversations with the companies, so I have nothing more specific to report at this time about the specific instances in which we're going to be using the (DPA) authority. What the authority does is empower the secretary of Health and Human Services to make these individual decisions on a case-by-case basis," one official told reporters.

Asked about whether there is currently a tightness in the supply for ingredients to make formula, the official added that those conversations are ongoing. Pressed about this later in the call, this official noted that the DPA authority isn't only about addressing potential ingredients shortages, but also about speeding up the supply chain.

"So that gives us the authority to work closer with the infant manufacturers and pull stuff through the supply chain faster," they said.

Brian Deese, the director of the National Economic Council, told "CNN Newsroom" on Thursday that the administration in a "fast-moving process" to determine where the DPA will be used to get manufacturers at full production capacity.

"(A)s soon as we can responsibly explain where these instances will be in place, we will do so," Deese added. "But rest assured there is an entire team that is engaged on an hour by hour basis to make sure that we are doing everything we can to facilitate this movement of goods from companies into the country."

The moves came as the administration is feeling more pressure from Congress to deal with the shortage.

The Senate on Thursday approved a bill by unanimous consent intended to improve access to infant formula. The bill, called the Access to Baby Formula Act, was approved by the House on Wednesday and will now go to the President's desk for his signature.

The measure is aimed at ensuring that families in need can continue to buy baby formula with their benefits from WIC -- also known as the Special Supplemental Nutrition Program for Women, Infants, and Children -- during a public health emergency or supply chain issues such as a product recall.

The House also passed another bill on Wednesday to help to address the baby formula shortage, but the fate of that legislation is more uncertain in the Senate. That bill would provide $28 million in emergency funding for the US Food and Drug Administration in an effort to help alleviate the current shortfall and head off future shortages.

Dr. Robert Califf, commissioner of the US Food and Drug Administration, told a congressional panel on Thursday that the baby formula shortage should get better within days, but it will take a few weeks to get back to normal.

"It will gradually get better," Califf said, when asked when parents will be able to find infant formula on the shelves. He added that the big problem there is now is distribution and that rural areas are facing the worst problems.

"Within days it will get better," Califf said. "But it will be a few weeks before we're back to normal."

A group of Democratic senators are calling on Biden to immediately appoint someone to oversee the baby formula shortage, urging him to hire someone who can implement a national strategy to deal with the supply chain issues. Some Democratic lawmakers on Wednesday also expressed concern over the baby formula shortage calling on the administration and Washington to do more.

Wednesday's announcement follows other steps the administration has taken over the last two weeks to address concerns about a months-long formula shortage, which has parents in different parts of the country scouring stores to feed their children.

The FDA has reached an agreement with Abbott Nutrition to reopen a major plant in Michigan that has been shuttered for months because of contamination issues. The agreement lays out steps the manufacturer must take to restart production at its plant. Once Abbott has completed the to-do list to the FDA's satisfaction, the company says it would take two weeks to resume production of baby formula at the facility.

A White House official also told CNN earlier Wednesday that the administration is working directly with infant formula manufacturer Reckitt and retailers, including Target, to provide logistical support as it works to help alleviate the shortage.

Reckitt, which manufactures Enfamil brand formula, has been working to boost its domestic production -- efforts that have been aided by the White House since Biden spoke with the leaders of Reckitt and Gerber, and retailers Target and Walmart, last week. Officials have been in "close communication" with the four major US manufacturers of infant formula -- Reckitt, Abbott, Nestle/Gerber and Perrigo -- as well as major retailers this week following the conversations with Biden.

The administration also established a website last week, HHS.gov/formula, to provide resources to families in need. But when a CNN reporter tested out some of those options, the exercise resulted in apologetic customer service representatives, one hold time that lasted well over an hour and serious challenges in finding baby formula through some of the main suggestions listed on the new HHS website.

Last week, the administration also announced limited efforts to import more formula from overseas, urge states to allow government nutritional assistance recipients more flexibility in the varieties of infant formula they can buy and crack down on price gouging by manufacturers.