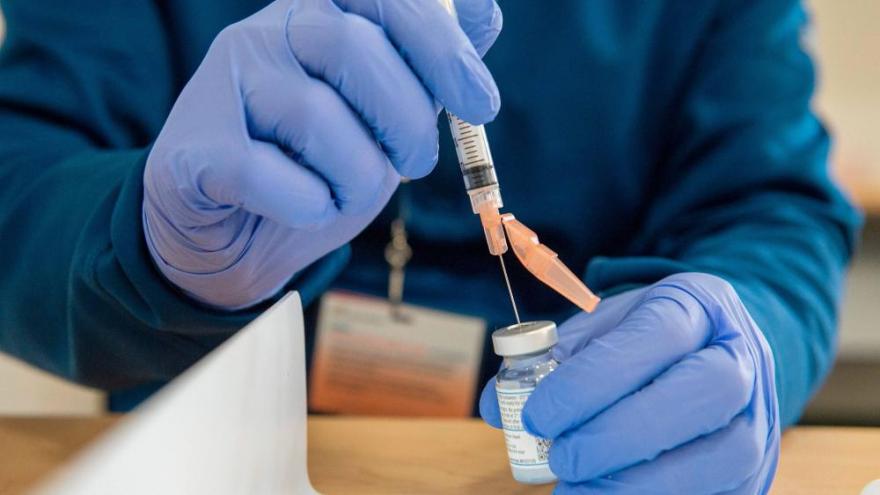 The Biden administration is taking a cautious approach as it touts using Defense Production Act. This image shows a health care worker preparing the Moderna Covid-19 vaccine in Marlborough, Massachusetts on January 12, 2021.

(CNN) -- The Biden administration has repeatedly touted its plans to aggressively use the Defense Production Act as it combats the coronavirus pandemic, but behind the scenes, a slower, more painstaking effort is underway.

The more cautious and contemplative effort means the new administration has yet to announce any new deals in its early days to ramp up supplies related to Covid-19 vaccine production, testing or personal protective equipment -- even as officials tout the use of the law.

"It was invoked, and it means our work is ongoing with companies to ensure that we are expediting the manufacturing of materials to ensure that we can get 100 million shots in the arms of Americans," White House press secretary Jen Psaki said Wednesday, rattling off a list of supplies the administration plans to increase production of without specifying any companies that were part of the efforts.

Manufacturers like Beckton, Dickinson and Company, which makes syringes, and MilliporeSigma, which makes single-use bags used in vaccine manufacturing, have both been in conversation with the Biden administration. But spokespeople from both companies said they were already working to expand capacity and, so far, have not started any new production efforts at the direction of the Biden administration.

The new administration -- only a week in -- has taken steps to try to improve the US coronavirus response. The most notable move, perhaps, was placing new orders with Pfizer and Moderna for their vaccines, though the administration said those orders aren't likely to be delivered until the summer.

Administration officials have said a top priority is low dead space syringes, which help extract extra doses of vaccine from the vials they are shipped in.

"We're going to make sure that we get six doses out of Pfizer's vials everywhere in America," Andy Slavitt, senior adviser to the White House Covid-19 response team, said Wednesday, noting that would be possible by acquiring more of the specialized syringes.

But as of this week, Beckton, Dickinson and Company -- the world's largest syringe manufacturer -- had no new federal orders for those specialized syringes.

"As much as the Biden administration talks about it, we sense that it's going to be consultative, nuanced and strategic," in using the Defense Production Act, said one industry source.

In recent weeks, ahead of the President's inauguration and after Biden assumed office, members of the Biden team have approached manufacturers and industries about what would work best to increase production, including options like investing in more manufacturing capacity, inking a new contract with the federal government, or prioritizing one industry's production lines over another.

In Beckton, Dickinson and Company's conversations with the Biden team, executives have tried to inform the administration about manufacturing limitations and suggest alternative productions that could serve as longer-term solutions.

"When you look at low dead space syringes, these are traditionally niche products that don't have very much market demand," said company spokesman Troy Kirkpatrick. "It only makes sense that companies don't have a huge capacity to produce these products. They're expensive and they're just not typically needed in vaccinations."

The company already has a government contract, signed under the Trump administration, to deliver some 286 million syringes, but just 40 million were the specialized low dead space variety. It's unclear how long it would take them to ramp up additional production of the specialized syringes.

"The low dead space discussion just started a few weeks ago," Kirkpatrick said. "This is new information for everyone."

Discussions around the Defense Production Act often result in new government contracts rather than the heavy-handed approach of forcing a company into production mode.

The Trump administration used the Defense Production Act multiple times, including to ink new contracts, but it was rarely forthcoming about when and how it was being used. Former administration officials have bristled at the criticism that they didn't maximize its use.

"Now it's far more surgical and less of a blunt force instrument," another industry expert said.