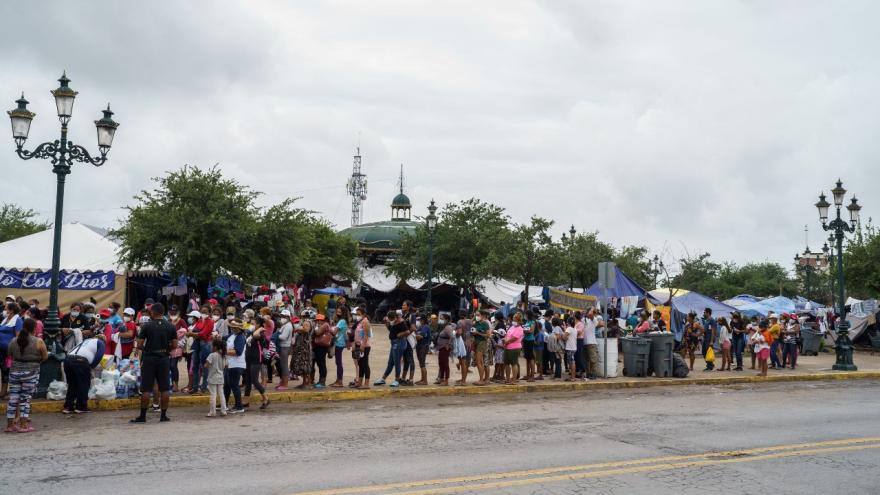 (CNN) -- The Biden administration has asked the Supreme Court to intervene in a case concerning the administration's decision to end the controversial Trump-era policy that forced migrants to stay in Mexico until their US immigration court date.

The request was filed with Supreme Court Justice Samuel Alito on Friday. It comes after the US Court of Appeals for the 5th Circuit refused on Thursday to put on hold an order from a district court judge that required the administration to revive the policy, informally known as the "Remain in Mexico" program.

The Biden administration is asking the Supreme Court to halt the judge's order while an appeal proceeds. The order from the district court requiring the revival of the program is slated to go into effect on Saturday.

The Trump-era policy was put in place in 2019 and marked an unprecedented departure from previous protocols. An estimated 68,000 migrants were returned to Mexico under the policy -- often to squalid and dangerous conditions.

Last Friday, a federal judge in Texas ordered the administration to start the policy back up. The Justice Department appealed and the US Court of Appeals for the Fifth Circuit denied their request to stay the order. The administration is now asking the Supreme Court to step in.

In the request filed with Alito, who oversees emergency matters arising from the 5th Circuit, the Biden administration argued the district court judge's order should be put on hold while the appeal is fully heard in the 5th Circuit and potentially the Supreme Court as well.

"(A)llowing the district court's erroneous and extraordinary injunction to take effect before this Court has been able to undertake plenary review would result in irreparable harm to the government that far outweighs any harm to respondents from a stay," the Biden administration said. "MPP has been rescinded for 2.5 months, suspended for 8 months, and largely dormant for nearly 16 months."

The appeals court said in an order late Thursday that it was declining to pause the lower court's order because the government was unlikely to succeed in its arguments in the case. The lower court had concluded that the Biden administration had violated the Administrative Procedure Act -- a law that dictates the procedural steps agencies must take in implementing policy -- when the DHS had sought to undo the Remain in Mexico policy.

A revival of the policy would also require collaboration from Mexico, which received the migrants when it was in place. The Fifth Circuit recognized that in its order, saying: "The injunction only requires good faith on the part of the United States — if the Government's good-faith efforts to implement MPP are thwarted by Mexico, it nonetheless will be in compliance with the district court's order, so long as it also adheres to the rest of the statutory requirements."

This story and headline have been updated with the Biden administration's filing with the Supreme Court.