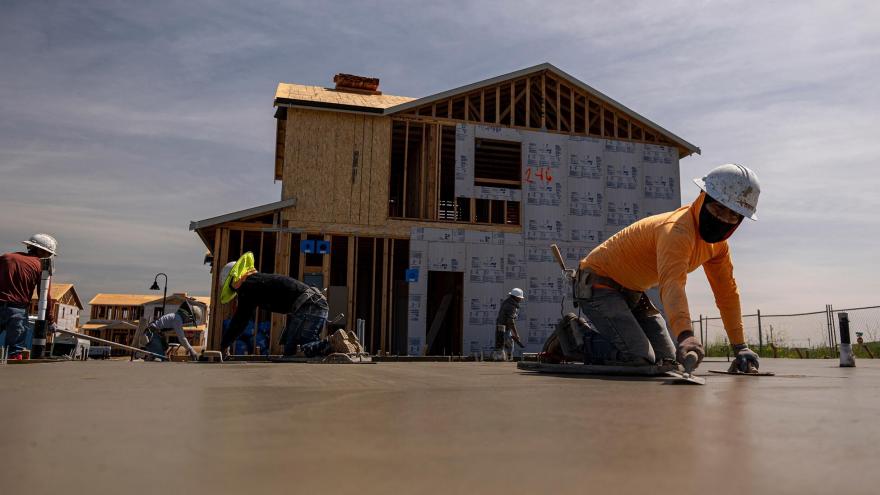 Contractors work in a housing development in Antioch, California, on March 31. The Biden administration is announcing an action plan on April 16 aimed at boosting the supply of affordable housing amid high inflation.

Taken together, administration officials said, the actions announced will help close the affordable housing gap and "ease the burden of housing costs," noting that housing prices are a key driver of inflation.

The move is the latest step by the administration to show it is working to get a handle on high prices nationwide. US home prices continued to surge higher in February, according to the most recent data from the S&P CoreLogic Case-Shiller US National Home Price Index. Prices rose 19.8% year-over-year in February, an even higher rate than the 19.2% growth seen in January. Meanwhile, rents are up nearly 20% from two years ago.

President Joe Biden said last week tackling inflation is a top domestic priority for his administration. He attacked Republicans for a plan put out by the head of the Senate GOP's campaign arm rather than laying out any new proposals to combat the worst inflation the country has seen in 40 years.

Among the new policies announced Monday are steps to leverage existing federal funding to encourage state and local reforms to zoning and land use policies, a senior administration official told reporters, via funding from the bipartisan infrastructure law and the Department of Transportation. A second official noted that the administration will take steps to improve federal financing mechanisms for manufactured housing, multifamily housing, and the construction and rehabilitation of single-family homes.

The administration will also direct supply of affordable housing for owner-occupants, which the second administration official said is aimed at addressing "the growing trend of large institutional investor purchases of single family homes."

And the administration will "work with the private sector to address supply chain challenges and improve building techniques to finish construction in 2022 on the most new homes in any year since 2006," the fact sheet said.

The actions will "help close the housing supply shortage in five years," the first senior official said, and will be paired with a series of proposed legislative measures to help ease costs. The legislative moves, which will require congressional approval, include tax credits for low- and middle-income home buyers and a proposed $25 billion for grants for affordable housing production.

Fudge will join Sen. Sherrod Brown and Rep. Joyce Beatty, both Ohio Democrats, for an event in Columbus, highlighting the new plan on Monday.

"The Plan's policies to boost supply are an important element of bringing homeownership within reach for Americans who, today, cannot find an affordable home because there are too few homes for sale in their communities. And it will help reduce price pressures in the economy, as housing costs make up about one-third of the market basket for inflation, as measured by the Consumer Price Index," the White House said in a fact sheet.

But while housing experts said the actions were welcome and necessary, they cautioned this would not be a quick fix. In addition, they said, while some actions can be taken on their own many of the recommendations require congressional approval, which may prove difficult.

"I commend President Biden for taking significant and decisive action, but the administration cannot solve the crisis on its own," said Diane Yentel, president and CEO of the National Low Income Housing Coalition. "Congress must also act with similar urgency and quickly enact Build Back Better's transformative and badly needed housing investments. Only through a combination of administrative action and robust federal funding can the country truly resolve its affordable housing crisis."

Record low interest rates coupled with more than a decade of under building created a supply and demand mismatch that has pushed home prices higher. Now the Federal Reserve is working to stem inflation by raising interest rates, which may reduce demand but will also make the cost of buying a home even more expensive.

For nearly eight million households with extremely low incomes, housing consumes at least half of their limited monthly budget, according to the NLIHC. Affordable homes that may have been out of reach for these households even before the pandemic are even more scarce now.

The NLIHC commended the administration's proposed use of federal transportation funds to relax local zoning laws, which tend to inhibit or prohibit the construction of apartments and can be rooted in racial exclusion. The organization also noted that by supporting manufactured housing, accessory dwelling units, and small-scale developments, the administration can increase affordable housing options in all kinds of communities nationwide. It also said that streamlining federal financing and funding sources can help lower the costs and speed of building these new homes.

Eliminating the regulatory barriers to new construction, especially in underserved markets, and expanding financing options for multifamily and rehabilitation projects can go a long way toward making housing more affordable in the US, noted Bob Broeksmit, president of the Mortgage Bankers Association.

"A commitment to more private and public sector partnerships will help address the housing supply and affordability challenges that continue to burden families," said Broeksmit.

Dennis Shea, the executive director of the Terwilliger Center for Housing Policy, agreed.

"This is the right focus," Shea said. "We've under built the housing supply by millions of homes over the past 20 years. Efforts to increase the supply of homes should reduce housing costs for people looking to rent or buy a home."