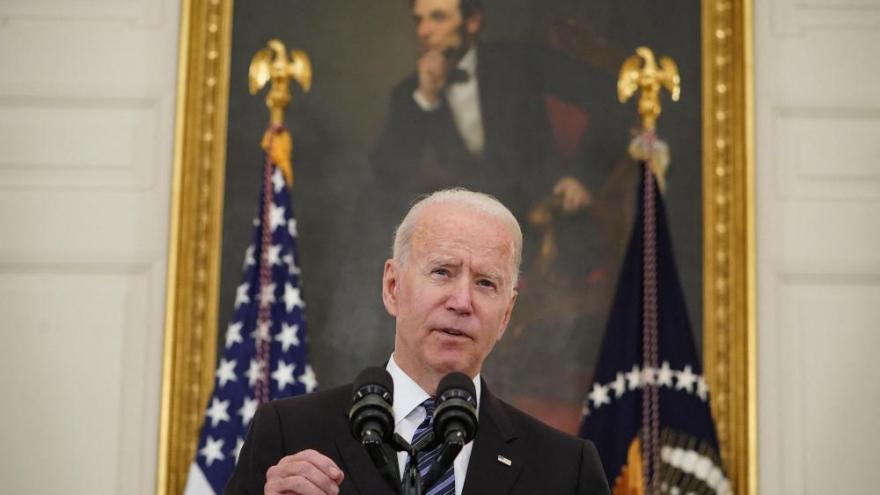 President Joe Biden's administration is encouraging state and local governments to use funding from the Covid relief package to address a summer rise in violent crime.

(CNN) -- The White House is encouraging state and local governments to use funding from the Covid relief package passed earlier this year to address a summer rise in violent crime as pandemic restrictions loosen nationwide.

The administration's strategy to combat crime, a White House memo obtained by CNN said, "uses the American Rescue Plan's $350 billion in financial support and clear guidance to provide state, local, territorial, and tribal governments the money they need to put more police officers on the beat -- including hiring above pre-pandemic levels in communities experiencing an increase in gun violence associated with the pandemic -- as well as the other resources, training, and accountability they need to engage in effective community policing."

The memo, first reported by Axios, comes ahead of a meeting on Monday between President Joe Biden, Attorney General Merrick Garland and local leaders -- including law enforcement, elected officials, and a community violence intervention expert -- that is expected to include representatives of cities using the Covid relief bill's funds. The memo detailed some of the best practices from the cities.

The meeting comes as some Democrats seek to respond political attacks from former President Donald Trump and other Republican leaders painting the Democrats as weak on crime amid "Defund the Police" and "woke" rhetoric.

New York Democratic mayoral primary winner Eric Adams was one of the leaders in attendance. Adams, the Brooklyn Borough president and a former NYPD captain, won his primary in part because of his tough-on-crime stance -- a message that many Democrats say could be critical for 2022 midterm election wins.

Adams told CNN following the meeting that Biden is "sending a loud message that this country, and cities like New York, we're no longer going to normalize the level of violence that's taking place in our inner cities, particularly handgun violence, something we have ignored on the federal level."

When pressed by CNN's Victor Blackwell on "Newsroom" about whether the President has offered anything new to deal with handgun violence, Adams said Biden is "taking a new -- and what I believe for the first of its kind, a holistic approach. ... The President has made it clear: We're going to look at crisis management teams, we're going to look at the educational system, employment, all of those things that could become a feeder to violence."

Washington, DC, Mayor Muriel Bowser, another attendee of the event, is proposing use of funding from the relief package for her 2022 budget. That includes funding for 100 new Metropolitan Police Department cadets, youth safety initiatives, employment opportunities through the Department of Public Works, mental health services, and other measures.

The memo, which was directed to state and local officials and written by Biden senior advisers Susan Rice, Gene Sperling, and Julie Rodriguez, noted that the funds "can also be used to support evidence-based community violence intervention programs, summer employment and educational opportunities, and other investments that we know will reduce crime and make our neighborhoods safer."

Democratic San Jose Mayor Sam Liccardo, another one of the meeting's attendees, said later Monday that he thinks the "White House recognizes the need for a more robust partnership between the federal government and local cities," adding that "Biden is demonstrating just how serious he is about that."

"He spent more than two hours talking with us about how they can be better partners -- really much more listening than talking. And I'm convinced that he is serious about this," Liccardo told CNN's Erin Burnett on "OutFront."

The administration has a multi-pronged approach to curbing violent crime, including stemming the flow of firearms, supporting local law enforcement with federal tools and resources, investing in community intervention, and helping formerly incarcerated individuals reenter their communities.

This story has been updated with additional developments on Monday.