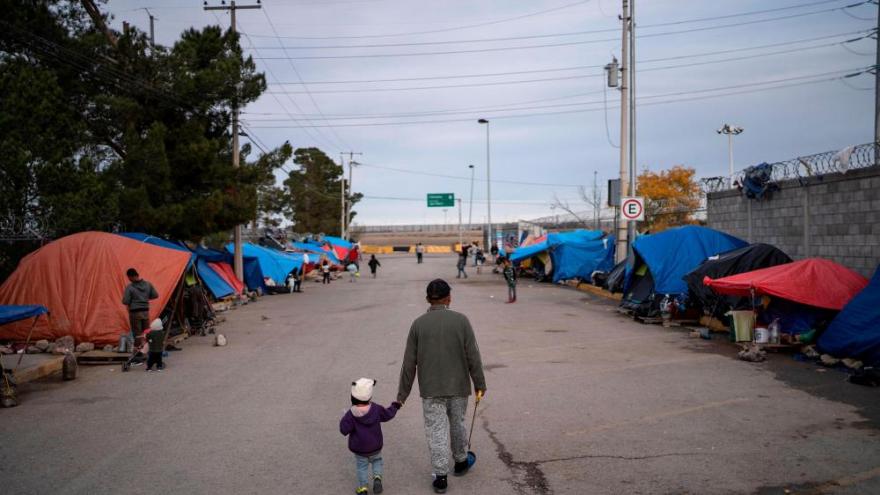 The Biden administration will process migrants forced to stay in Mexico under a Trump-era policy into the United States on February 19, according to administration officials.

(CNN) -- The Biden administration will begin processing migrants forced to stay in Mexico under a Trump-era policy into the United States on February 19, according to administration officials.

It's the first move toward addressing the thousands of non-Mexican migrants subject to a controversial policy under the Trump administration that required them to remain in Mexico -- often in dangerous conditions -- until their immigration court dates in the United States.

RELATED: What to know about the situation at the US-Mexico border

An administration official told reporters Thursday that the effort is "phase one of a program to restore fair and orderly processing at the Southwest border."

The initial phase will apply to an estimated 25,000 migrants with active cases in the program formally named Migrant Protection Protocols. International organizations in Mexico will play a critical role in helping to identify eligible individuals, including those in the program the longest and vulnerable populations. The organizations, with US support, will also provide them with Covid-19 testing and eventually transport to a select port of entry to come to the United States.

Once processed into the United States, individuals will be released into the country as they proceed with their immigration hearings, another official said, adding that they'll be enrolled in alternatives to detention programs.

Administration officials urged migrants to await further information prior to taking any action. "It's important to explain that individuals shouldn't take any action at this time. They should remain and await further instructions, and those will come in the coming days," one official said.

CNN previously reported that the administration was preparing plans for the gradual entry of migrants forced to remain in Mexico.

Under President Donald Trump, migrants from Central America and other parts of the world who were seeking asylum at the US-Mexico border were forced to stay in Mexico until their immigration court hearings in the United States. That meant waiting months, if not years, in squalid conditions and under the threat of extortion, sexual assault and kidnapping.

The policy was an unprecedented departure from previous protocols, which had allowed for the entry of migrants as they went through their immigration hearings in the United States.

The admission of migrants subject to the Trump-era policy is a complicated endeavor, given the vulnerability of the population and the challenges in communicating process and expectations.

The administration will be working with international organizations to reach migrants through social media networks in order to relay relevant information.

"We will also be conveying to all of the communities as we can through media and social networks that there will be two ways to register if you believe you have an open MPP case and those will be on ... a website and also by telephone," an official said.

The Biden administration has also been working closely with the Mexican government.

Three select ports will be used in the beginning to start processing eligible individuals. Of those, two ports, once fully operational, will process about 300 individuals daily. Officials wouldn't disclose which ones they'll be out of concern over people rushing to those ports, but they noted that more ports will eventually be included.

Despite the imminent changes, officials stressed that the US-Mexico border will still largely be sealed off to migrants as more processes are put in place.

"It does not change the status at the border, and people should not assume that now they can come to the border and be part of this process," an official said.