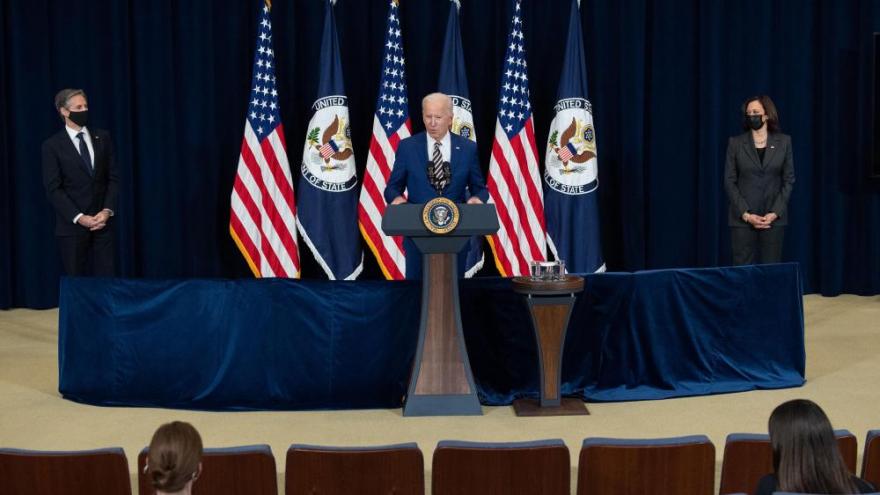 US President Joe Biden, with US Secretary of State Antony Blinken (L) and US Vice President Kamala Harris, speaks to the staff of the US State Department during his first visit in Washington, DC, February 4, 2021.

(CNN) -- The Biden administration will reengage with the United Nations Human Rights Council, Secretary of State Antony Blinken announced Monday -- its latest bid to reverse the policies of the Trump administration and return to a foreign policy with roots in multilateral institutions.

In a statement, the top US diplomat said that President Joe Biden "has instructed the Department of State to reengage immediately and robustly with the UN Human Rights Council."

The United States will begin that engagement in an observer role, Blinken said, "and in that capacity will have the opportunity to speak in the Council, participate in negotiations, and partner with others to introduce resolutions."

The Trump administration quit the UN Human Rights Council in 2018. Then-US Ambassador the the UN Nikki Haley accused the Geneva-based body of bias against Israel and failing to hold human rights abusers accountable.

"For too long," Haley said, "the Human Rights Council has been a protector of human rights abusers, and a cesspool of political bias."

"Human rights abusers continue to serve on, and be elected to, the council," she said. "The world's most inhumane regimes continue to escape its scrutiny, and the council continues politicizing scapegoating of countries with positive human rights records in an attempt to distract from the abusers in its ranks.

There are 47 member states on the Council, and current members include countries that have been accused of grave human rights abuses like China, Russia and Venezuela.

In his statement, Blinken said, "We recognize that the Human Rights Council is a flawed body, in need of reform to its agenda, membership, and focus, including its disproportionate focus on Israel."

"However, our withdrawal in June 2018 did nothing to encourage meaningful change, but instead created a vacuum of U.S. leadership, which countries with authoritarian agendas have used to their advantage," he said.

"When it works well, the Human Rights Council shines a spotlight on countries with the worst human rights records and can serve as an important forum for those fighting injustice and tyranny," Blinken continued. "The Council can help to promote fundamental freedoms around the globe, including freedoms of expression, association and assembly, and religion or belief as well as the fundamental rights of women, girls, LGBTQI+ persons, and other marginalized communities."

"To address the Council's deficiencies and ensure it lives up to its mandate, the United States must be at the table using the full weight of our diplomatic leadership," he said.

The reengagement with the Human Rights Council is the latest effort to restore US standing on the global stage through involvement in multilateral organizations and treaties spurned by the Trump administration. Biden reversed the US departure from the World Health Organization. He also rejoined the Paris climate accord.

The Biden administration has also reversed a number of Trump-era foreign policy decisions over the last several days, suspending migration agreements with Honduras, El Salvador and Guatemala and moving to rescind the foreign terrorist organization designation of Yemen's Houthi rebels.