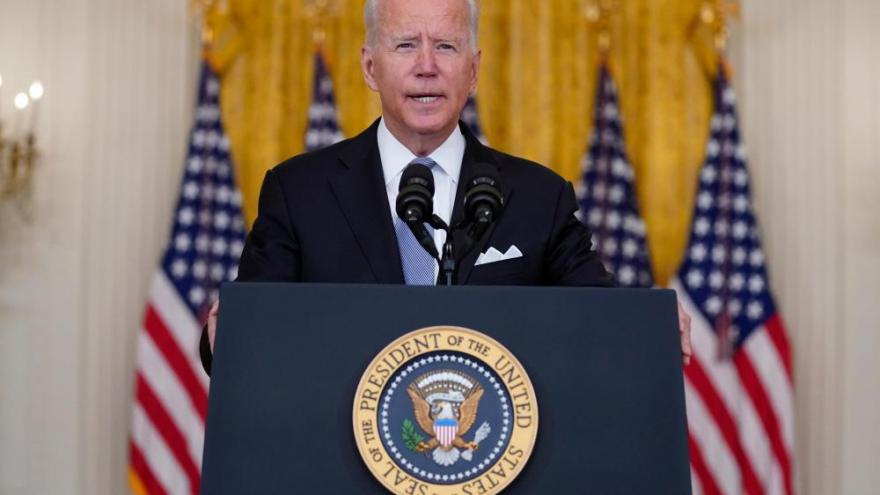 President Joe Biden speaks about Afghanistan from the East Room of the White House, Monday, August 16, 2021, in Washington, DC.

(CNN) -- President Joe Biden admitted that the collapse of the Afghan government and the Taliban retaking control happened more quickly than the US government had anticipated, leading to the ongoing crisis playing out in front of the world.

Biden refused to back away from his decision to end the American military's combat mission in the nation, where the US had fought the nation's longest war. Biden put the blame on Afghanistan's political leaders and that nation's armed forces for not standing up to the Taliban's lightning quick offensive that put them back in control after two decades of war.

"I stand squarely behind my decision. After 20 years, I've learned the hard way that there was never a good time to withdraw US forces. That's why we're still there, we were clear-eyed about the risks, we planned for every contingency. But I always promised the American people I would be straight with you," Biden said. "The truth is, this did unfold more quickly than we had anticipated."

As chaos descends on Kabul's international airport, where desperate Afghans rushed the tarmac seeking a way out of their country, the President remained resolute in his decision to withdraw American troops from the country. Still, Biden has sent an additional 6,000 troops to the country to secure the airport, a sign of the complicated and contradictory process of winding down America's longest war.

In a written statement over the weekend, Biden staunchly defended his decision to leave Afghanistan, saying he would not pass the 20-year conflict on to another president. He also lay part of the blame for the current situation on his predecessor, Donald Trump, who brokered a deal with the Taliban to withdraw American troops by May 1, 2021.

Speaking Monday on morning television programs, senior members of Biden's national security team also sought to shift blame for the collapse of the Afghan government on the country's defense forces, which they said lacked the will to defend their country against the Taliban.

But they continued to acknowledge that the speed with which Afghan cities fell -- ending with Kabul -- had caught them by surprise.

"It is certainly the case that the speed with which cities fell was much greater than anyone anticipated," national security adviser Jake Sullivan said on NBC's "Today."

Recriminations over the failure to recognize the shortcomings of the Afghan army, or to predict the speed of its collapse, have been swift since the Taliban claimed control of the country on Sunday. Biden himself repeatedly downplayed the prospect of the Taliban taking over Afghanistan over the past weeks, and rejected the notion Americans would be evacuated from the embassy there -- the exact scenario that ended up playing out on Sunday.

Now, scenes of chaos from Kabul, including Afghans clinging to the side of moving US military transport planes, have heightened the impression the US war is ending in mayhem. They belie the administration's descriptions of a "safe and orderly" evacuation from the country.

Biden himself has pressed his national security team to explain how intelligence assessments -- which as recently as last month said it could take weeks or months for Kabul to fall after the last US troops withdrew -- were so off, according to people familiar with the matter.

At the same time, he has not second-guessed his decision to withdraw. And senior White House advisers said the swift collapse of the Afghan military after years of training from American forces only confirmed the unlikelihood that any more time in the country could change the eventual outcome.

During daily video conference calls from Camp David, where he has been since Friday, Biden has received information and recommendations from military leaders about how to secure the Kabul airport. He had originally been scheduled to remain at the mountainside retreat until Wednesday.

Deputy national security adviser Jonathan Finer, speaking on CNN, said Monday that Biden "has been deeply engaged in all of the policy conversations" surrounding Afghanistan from his retreat in the mountains of Maryland, and said the President would meet again virtually with members of his national security team on Monday.

The White House released a photograph of a casually dressed Biden receiving a briefing on Sunday. In it, he appeared alone at a large conference table as senior administration officials beamed in from the White House, Pentagon, intelligence agencies and Doha, the Qatari capital.

As chaos unfolds in Kabul, the White House told CNN it had no calls to disclose between Biden and his foreign counterparts regarding the collapse of government in Afghanistan. Although he participated in several virtual briefings with top staff Sunday, including his national security team, those aides say there are no calls with world leaders to summarize, as is common procedure at the White House.

"I don't have anything to read out," a National Security Council official told CNN when asked specifically if there were any calls with foreign leaders Sunday.

While Biden apparently made no calls, Secretary of State Antony Blinken was on the phone with his Australian, French, German and Norwegian counterparts about efforts to bring "citizens to safety and assist vulnerable Afghans," according to a State Department spokesperson.

Several of Biden's counterparts -- including French President Emmanuel Macron and German Chancellor Angela Merkel -- were scheduled to address the situation in Afghanistan during speeches on Monday. European allies have privately complained about how Biden handled the decision to withdraw US troops, claiming they were only consulted when a decision had been made.