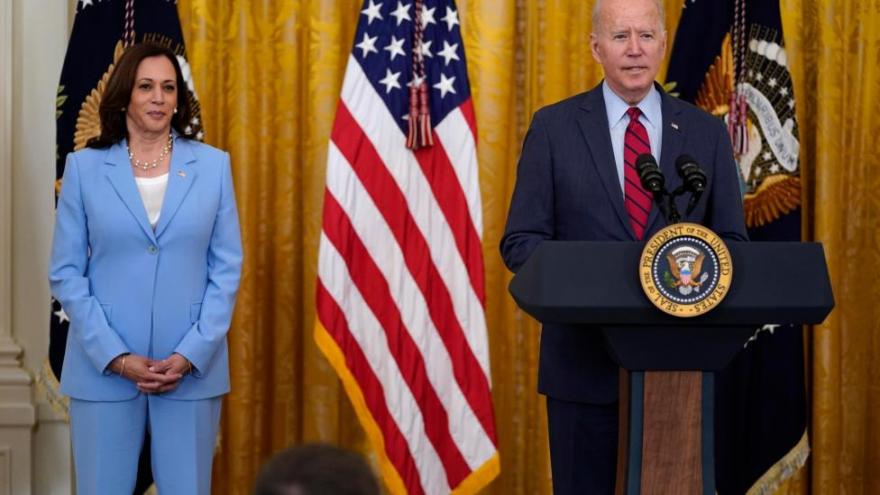 President Joe Biden and Vice President Kamala Harris will hold separate events Thursday to focus on voting rights. Biden and Harris are seen here at the White House on June 24.

Harris will announce the expansion of the Democratic National Committee's "I Will Vote" campaign with an event in the Washington, DC, area, according to a committee official. Biden will meet privately with a range of civil rights groups to talk about their efforts to protect voting rights, according to a White House adviser.

The separate events come in the midst of Republican efforts to pass restrictive voting rights laws across the country.

Harris, who has been tasked by the White House to lead their effort to push voting rights, will focus her remarks on why the entire Democratic Party must fight voter suppression, the DNC official said. She will also be made the honorary chairwoman of the DNC's "I Will Vote" program.

The Biden meeting will include representatives from the NAACP, National Coalition for Black Civic Participation, National Urban League, National Action Network, NCNW, Leadership Conference for Civil & Human Rights and Lawyers' Committee for Civil Rights Under Law, the adviser said, adding that the President is personally "revolted" by the Republican attempts to tighten election laws in response to the 2020 election.

"We see this assault from restrictive laws, threats of intimidation, voter purges and more," Biden said at a White House event in June to celebrate Juneteenth. "We can't rest until the promise of equality is fulfilled for every one of us in every corner of this nation. That, to me, is the meaning of Juneteenth."

So far, Democrats have been unable to get any voting rights changes through Congress. After the party's signature voting and elections bill passed the House earlier in the year, Republicans sunk the Senate version during a key procedural vote in June. All 50 Democrats, including West Virginia Sen. Joe Manchin, were united in passing the bill, but all 50 Republicans voted against, meaning the bill failed to get the needed 60 votes to move on in the legislative body.

Spurred, in part, by former President Donald Trump's false claims that the 2020 election was stolen, Republican legislatures have passed restrictive voting laws in states ranging from Florida to Texas to Georgia to Iowa. Trump has applauded the efforts from afar and pushed other states to do the same.

"Election Reform must happen in Swing States like Pennsylvania, Michigan, Georgia, Wisconsin, and Arizona where voters have lost confidence in their electoral process," Trump said in a statement on Tuesday.

According to the Brennan Center for Justice, lawmakers in 17 states had enacted 28 restrictive ballot access laws as of June 21, a record since 2011, when 19 laws were enacted by 14 state legislatures. The events comes on the same day that Texas is scheduled to convene a special session of the state legislature to revive a slew of new voting restrictions effectively killed by Democrats during the regular legislative session.

Republicans responded to the Democratic effort by accusing the party of trying to push a "federal takeover of elections."

"Democrats refuse to join Republicans in supporting common sense policies like voter ID, because their sole agenda is more power and partisan control," said Nathan Brand, a spokesman for the Republican National Committee.

In response to the Republican efforts, a range of Democratic organizations have ramped up their focus on protecting the right to vote, launching a range of programs to educate voters on new laws, publicly attack the lawmakers pushing the laws and combating the laws in court.

The Democratic National Committee campaign has been central to the party's response to these laws.

Committee Chair Jaime Harrison announced earlier in the year that the committee would invest at least $20 million in their bid to help Democrats keep control of the House in 2022, including funding "dozens" of voter protection staffers in states like Arizona, Michigan, North Carolina, Nevada and Pennsylvania. At the time, Harrison called restrictive voting rights laws "fundamentally un-American."

The DNC has not been alone in their efforts to protecting voting rights. Priorities USA, a top Democratic super PAC, invested $50 million in voting rights work over the last four years and plans to continue the investment into 2022. And the Democratic Senatorial Campaign Committee announced in June plans to invest $10 million in voter protection efforts ahead of the 2022 midterm elections.