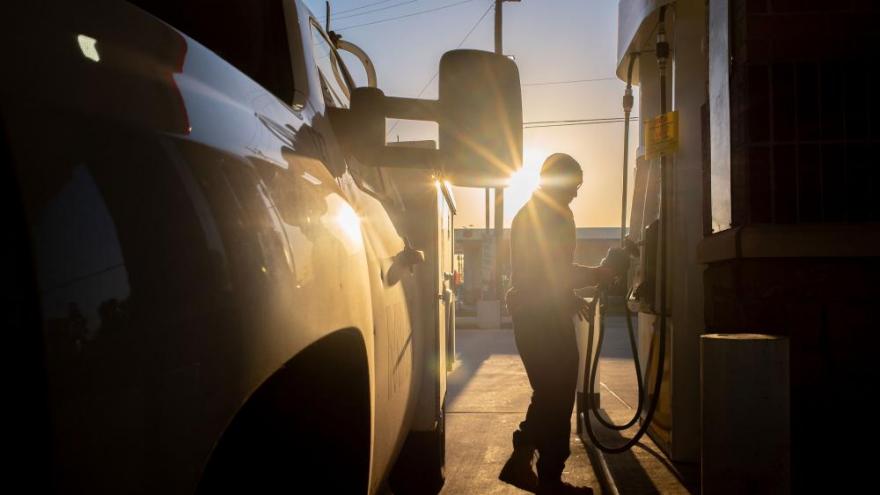 A person finishes pumping gas at a Shell station on April 1, 2022, in Houston. President Joe Biden will announce new steps his administration is taking to address rising gasoline prices across the country on April 12.

The President announced that the Environmental Protection Agency will issue an emergency waiver permitting year-round sales of E15 gasoline, which contains a 15% ethanol blend, on a trip to Menlo, Iowa, where he visited POET Bioprocessing, a biofuels plant that specializes in the creation of bioethanol.

"E15 is about 10 cents per gallon cheaper than E10. Some gas stations offer an even bigger discount than that," Biden said. "But many of the gas stations that sell it ... are required to stop selling it in the summer, but with this waiver, on June 1, you're not going to show up and see a bag over the pump with the cheapest gas. You're going to be able to keep filling up with E15 and it's going to solve a whole problem."

The sale of E15 gasoline is usually prohibited from June to mid-September because of air quality concerns. Under former President Donald Trump, the EPA issued an order allowing permanent year-round sales of the biofuel blend in 2019, but the order was overturned last year by the US Court of Appeals for the DC Circuit.

In his remarks, Biden appeared to tie rising fuel costs directly to Russian President Vladimir Putin's war in Ukraine, saying that Americans' budgets shouldn't depend on whether a dictator "commits genocide" in another country.

"Your family budget, your ability to fill up your tank, none of it should hinge on whether a dictator declares war and commits genocide a half a world away," Biden said, later referring to the rising fuel costs as the "Putin price hike."

Biden has previously stopped short of calling what is underway in Ukraine a genocide and his aides have said it doesn't yet rise to the level.

In Iowa, the President acknowledged that the new waiver is "not going to solve all our problems," when it comes to rising fuel prices, "but it's gonna help some people. I'm committed do whatever I can to help." He also said, "There's more we need to do to bring down the prices for American families," citing his previous executive orders to lower food prices and increase market competition.

Tuesday's E15 announcement, a senior administration official said, "is distinct from" his predecessor's efforts to expand ethanol sales in that it's "based on the current circumstance, which is a fuel supply emergency."

Per White House estimates, E15 sales could save consumers 10 cents per gallon on average, while reducing reliance on foreign fuels. As part of Tuesday's announcement, the EPA will also take steps to facilitate the expanded use of the biofuel, including outreach to states and modifications to E15 fuel pump labeling at gas stations across the country.

During Monday's news briefing, White House press secretary Jen Psaki signaled that suspending the summer ban on gasoline with higher blends of ethanol was on "the menu of options" the administration was considering "to ensure that the supply in the market meets the demand, thus bringing the price down."

The move follows Biden's announcement last month of a historic release of oil from US reserves, including 1 million barrels a day from the US Strategic Petroleum Reserve for the next six months as part of a "wartime bridge" to increased oil production as US and global oil efforts ramp back up after the coronavirus pandemic.

"The President believes that the actions of a dictator half a world away should not impact what families pay at the pump here at home," the White House said in a fact sheet announcing the action that was shared with CNN. "Today's actions also reinforce the Biden-Harris Administration's goal of achieving real energy independence and commitment to a long-term strategy to spur smart development and adoption of sustainable, homegrown fuels."

Still, the administration is stopping short of sanctioning Russian energy exports, with the senior official instead pointing to "a set of actions that we think have generated severe impact on the Russian economy."

"We've also in the United States, through the President's action and with support on a bipartisan basis, banned all energy imports from Russia to the United States. We understand that other countries are in a different position. We are obviously in a strong position -- as a net energy exporter -- to do that, though it did have real, real effects and price impacts the President has now been working to mitigate," the official told reporters Monday.

The official continued: "But we have taken a strong set of steps when it comes to the effects on the Russian economy, and we're going to continue to work with our partners and allies, as we have, to continue building on that."