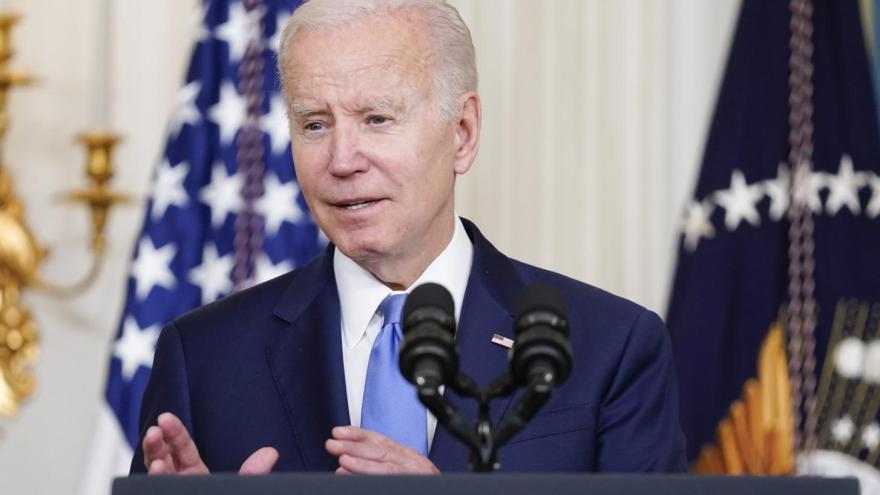 US President Joe Biden will announce several new initiatives on June 17 as he hosts the Major Economies Forum on Energy and Climate, according to senior administration officials.

(CNN) -- President Joe Biden on Friday convened a meeting of more than 20 of the world's largest economies to discuss steps to curb methane emissions to address the climate crisis as well as efforts to stabilize global energy markets amid Russia's invasion of Ukraine.

At the US-hosted Major Economies Forum on Energy and Climate, the President argued Russian President Vladimir Putin's war has "sharpened the need to achieve long-term reliable energy security and stability," and fueled a "global energy crisis."

Biden on Friday announced the US and European Union have launched the next step of their global methane pledge to reduce emissions of the planet-warming gas by 30% by 2030. The so-called energy pathway will focus on eliminating routine flaring in fossil fuel operations -- the burning of natural gas that happens in oil extractions -- and focus on ways to cut methane pollution in the oil and gas sector.

"Each year our existing energy system leaks enough methane to meet the needs for the entire European power sector. We flare enough gas to offset nearly all of the EU's gas imports from Russia. So by stopping the leaking and flaring of the super potent greenhouse gas and capturing this resource for countries that need it, we're addressing two problems at once," Biden said, speaking virtually with the other leaders from the White House.

Biden on Friday also announced a new global initiative focused on raising $90 billion to develop and scale new clean technologies to decarbonize. The US will devote $21.5 billion to this effort, with funds already passed in Biden's bipartisan infrastructure law.

The President said the new initiatives -- which do not require congressional approval -- were part of the US' overall efforts to bolster energy security, reduce dependence on Russian gas, bring down gas and energy prices and reduce greenhouse gas emissions.

"A critical point is that these actions are part of our transition to a clean and secure long-term energy future. And the good news is climate security and energy security go hand in hand," Biden said.

The meeting comes as the bulk of President's sweeping climate agenda remains stalled in Congress, leaving Biden without any major domestic climate policies to present to other world leaders. It also comes as the President acknowledges there is little he can do to immediately bring down the price of gas in the US, which recently hit $5 a gallon on average nationwide for the first time ever.

Friday's meeting was the largest climate meeting of world leaders in the run-up to the United Nations climate summit, COP27, in November. Twenty-three of the world's largest economies were represented at the virtual meeting, as well as other countries participating in climate pledges. Several foreign nations were also expected to announce strengthened climate targets in line with the Paris agreement.

Methane is a potent greenhouse gas that's around 80 times more powerful than carbon dioxide in the short term. Climate scientists say reducing methane emissions is a necessary but easy way to begin turning down the dial on the climate crisis.

The President invited other countries to join his previously announced domestic goal that by 2030, half of vehicles sold in the US will be battery electric, fuel-cell electric or plug-in hybrid. Biden's zero-emissions vehicles target is not binding and some other countries are moving more aggressively on it. For instance, the European Union is considering its own more stringent standards to ban the sale of new combustion engine cars by 2035.

Countries participating in Friday's meeting include China, Australia, the European Union, the United Kingdom, Japan, Indonesia, Saudi Arabia and Egypt -- which will host COP27 in November.

Chinese President Xi Jinping did not attend the meeting; China instead was represented by its climate envoy Xie Zhenhua, officials said.

A senior administration official said Zhenhua and US Climate Envoy John Kerry have met multiple times in the last month and continued work on the agreement the two countries announced at COP26 in Glasgow last year is "intensifying" and a "top priority."

"We are committed to working with them on topics like their plan to address methane emissions in China for the first time," that official said. "We're also of course engaging on other topics including the energy transition and illegal deforestation in China."

As promising as Biden's early goals on reducing US greenhouse gas emissions were, progress on achieving them has been mixed, independent analysis shows.

After rejoining the Paris accord after taking office, Biden announced a goal to slash US emissions in half from 2005 levels -- a record-high year for planet-warming emissions -- by 2030.

In order to do that, the nonpartisan research firm Rhodium Group found that three major things would have to happen: Biden would have to pass massive investments in clean energy through Congress, enact several ambitious federal regulations cutting emissions from things like vehicles, power plants and industry, and states would have to make significant progress.

On Thursday, Rhodium released a progress report showing little progress has been made, and the window to act is rapidly closing.

Rhodium Group partner John Larsen told CNN that the things Biden has able to get done so far -- including passing his bipartisan infrastructure bill and getting through some government regulations -- is still nibbling around the edges of his Paris commitment.

"The big-ticket items are all either in a holding pattern or at very early stages," Larsen told CNN.

The biggest item left undone is a climate and clean energy package passing through Congress. Talks between West Virgina Sen. Joe Manchin and Senate Majority Leader Chuck Schumer on a limited spending package that likely will include clean energy tax credits are continuing -- but so far it's unclear if they will produce a deal.

The timeline to pass any such legislation is extremely narrow, as Democrats risk losing their majority in November.

Larsen said Biden's Environmental Protection Agency has several regulations either in the works or yet to start that could make a dent. But even that has roadblocks.

Another barrier to progress has been the looming Supreme Court decision on EPA's authority to regulate greenhouse gas emissions from power plants, which could limit the tools the administration has to cut down planet-warming gases in the electricity sector.

"When [White House national climate adviser] Gina McCarthy says the federal government has all the tools to get to the target, it's almost certainly the case that they do," Larsen said. "But how they use these tools and how ambitious they choose to be will almost certainly be influenced by whether there's legislation in place."