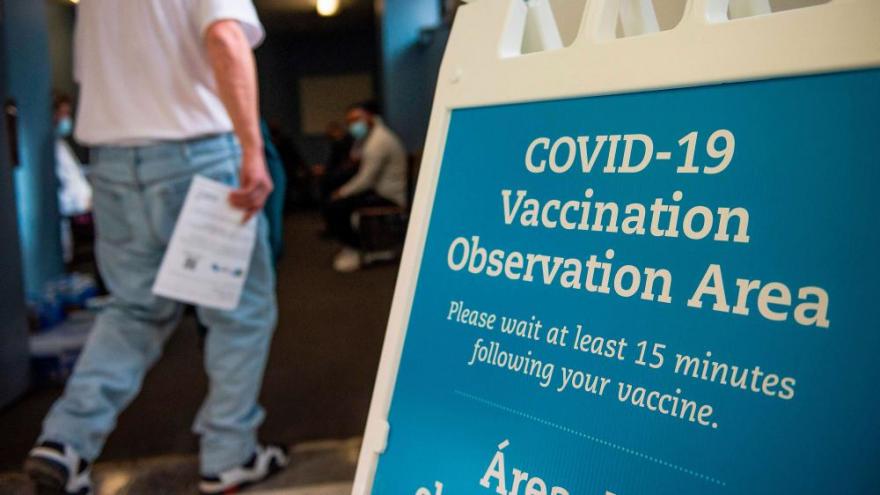 Homeless men and shelter staffers wait in an observation room after receiving the Pfizer-BioNTech Covid-19 vaccine at The Open Hearth mens shelter in Hartford, Connecticut on January 22.

(CNN) -- President Joe Biden announced a series of measures on Tuesday aimed at ramping up coronavirus vaccine allocation and distribution, including the purchase of 200 million more vaccine doses and increased distribution to states by millions of doses next week.

With those additional doses, Biden said there would be enough to fully vaccinate 300 million Americans -- nearly the entire US population -- by the end of summer or early fall.

He described efforts to combat Covid-19 as a "wartime undertaking."

"We now have a national strategy to beat Covid-19. It's comprehensive. It's based on science, not politics. It's based on truth, not denial, and it is detailed," he said.

As part of the new efforts announced Tuesday, the US will buy 100 million more doses from Pfizer/BioNTech and 100 million more from Moderna -- the two-dose vaccines that have been granted emergency use authorization by the US Food and Drug Administration. Pfizer and Moderna are working to step up production, and Biden said that the additional doses will be available this summer.

The new purchase will increase the planned Covid-19 vaccine supply from 400 million to 600 million, an official told reporters on a call on Tuesday ahead of Biden's remarks.

The President also took action on Tuesday to increase the weekly vaccine supply to states, tribes and territories -- upping the current 8.6 million doses to a minimum of 10 million doses weekly. Additionally, the White House will be providing three week vaccine supply look-ahead reports to states as opposed to one week look-aheads.

Biden's Covid coordinator, Jeff Zients, informed governors on a call Tuesday afternoon that Covid vaccine allocations for states would increase by around 16% starting next week.

A White House document explaining the move says the Biden administration is committing to maintaining this as the minimum supply level for the next three weeks.

The new efforts come one day after the President said he expects the US will soon be able to vaccinate 1.5 million people a day, which is a notable increase from the administration's previously stated target of 1 million per day. The President said that the US could surpass that initial target in about three weeks, and said that he thinks anyone who wants a vaccine will be able to get it by this spring.

There have been about 22.7 million doses of Covid-19 vaccines administered to Americans as of Tuesday afternoon, according to data provided by the US Centers for Disease Control and Prevention.

About 3.3 million Americans have received two doses of a vaccine as of Tuesday afternoon, according to the CDC.

The President said Monday that the key factors involved in ramping up vaccinations are having enough of the vaccine, syringes and other necessary equipment and people administering them.

The vaccine supply and the question of whether there will be enough doses to go around has been a key concern for the Biden administration, CNN has reported.

Biden signed an executive order on his first full day in office to ramp up supplies for vaccinations. The order was part of a series of actions Biden took that day to address the coronavirus pandemic, which continues to devastate the nation and has claimed the lives of more than 421,800 Americans as of Tuesday afternoon.

The Biden administration believes it did not inherit a working federal coronavirus vaccine distribution plan from the Trump administration.

"The sad part is the last administration didn't leave anything, didn't leave a plan," Biden senior adviser Cedric Richmond said on CNN over the weekend.

Before taking office, Biden was openly critical of what he described as a "dismal" rollout of the Covid vaccines under President Donald Trump.