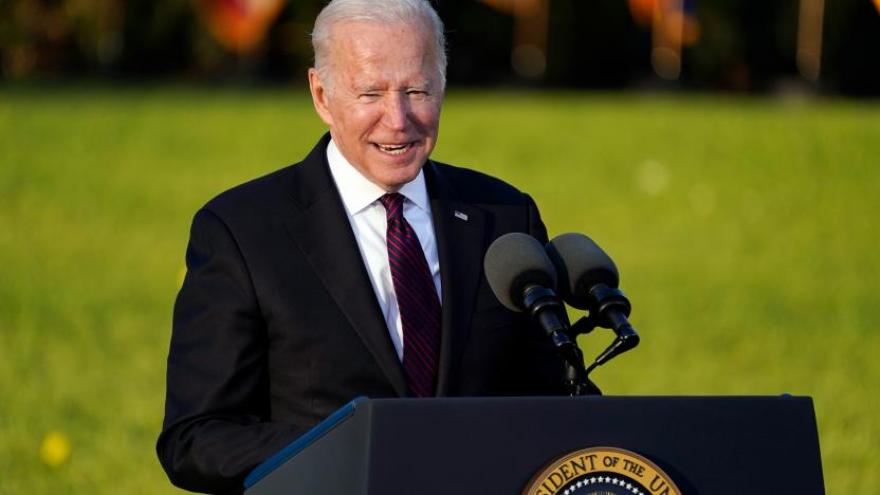 President Joe Biden asked the Federal Trade Commission on Wednesday to "immediately" investigate whether illegal activity by oil and gas companies is pushing up gas prices. Biden is shown here on the South Lawn of the White House, Monday, Nov. 15, 2021, in Washington.

(CNN) -- President Joe Biden asked the Federal Trade Commission on Wednesday to "immediately" investigate whether illegal activity by oil and gas companies is pushing up gas prices as he searches for a way to reduce pain at the pump.

The move isn't likely to have an immediate effect on the price consumers are paying for gas, which has recently soared as post-pandemic demand outpaces supply.

But Biden is seeking ways to show he is working to bring prices down, and the FTC's findings could help in the long run if they find wrongdoing.

In a letter to the FTC commissioner Lina Khan, Biden cited "mounting evidence of anti-consumer behavior by oil and gas companies" and said the agency must probe whether anything illegal is occurring to drive up prices.

"The bottom line is this: gasoline prices at the pump remain high, even though oil and gas companies' costs are declining," he wrote.

He cited an "unexplained large gap" between the price of unfinished gasoline and average prices at the pump as evidence of potential wrongdoing. And he noted industry profits have increased massively, while companies like ExxonMobil make plans for stock buybacks and dividends for stockholders.

"I do not accept hard-working Americans paying more for gas because of anti-competitive or otherwise potentially illegal conduct. I therefore ask that the Commission further examine what is happening with oil and gas markets, and that you bring all of the Commission's tools to bear if you uncover any wrongdoing," he wrote.

Biden did not cite any specific evidence of illegal activity. He had asked the FTC earlier this fall to closely monitor potential illegal activity in oil and gas markets, but his letter Wednesday made a direct call to investigate.

High gas prices are among the most frustrating phenomena for any White House because of a president's limited ability to bring them down. At the same time, they have the ability to inflict significant political damage as costs are borne by nearly every family.

The current surge has been spurred by more demand as drivers return to the road following an easing of Covid-19 lockdowns. Biden has worked to convince the oil producing nations of OPEC to increase supply, but they have largely rebuffed him.

He hasn't ruled out releasing barrels from the US Strategic Petroleum Reserve, but has been cautioned by administration officials that it would have only a limited effect on prices.

At the same time, Biden has worked to enact policies that would reduce American dependence on fossil fuels. He plans to travel Wednesday to Michigan to tour an electric vehicle plant and tout new funding for charging stations contained in the large infrastructure law he signed on Monday.