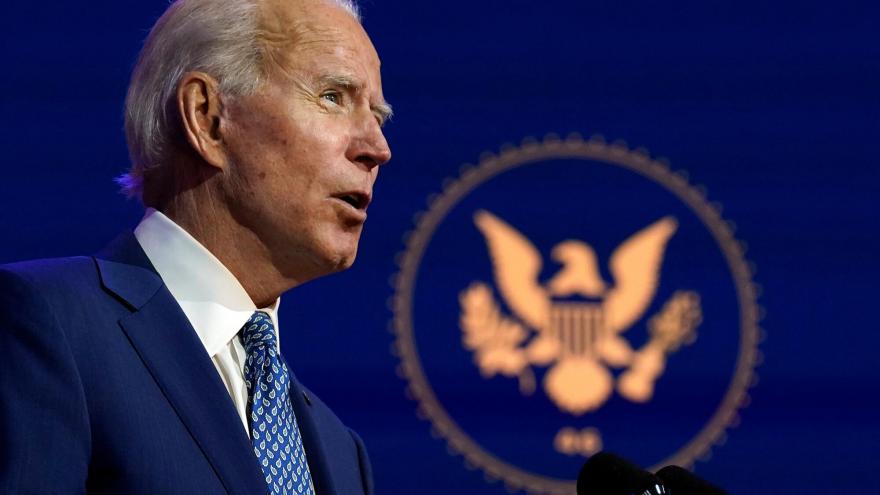 (CNN) -- President-elect Joe Biden lambasted the Trump administration's argument in the Supreme Court on Tuesday that the Affordable Care Act should be struck down, calling it "simply cruel and needlessly divisive" and saying that doing so would leave 20 million Americans' health coverage "ripped away in the middle of the nation's worst pandemic in a century."

"Let's be absolutely clear about what's at stake: The consequences of the Trump administration's argument are not academic or an abstraction. For many Americans, they are a matter of life and death, in a literal sense," Biden said in a speech in Wilmington, Delaware. "This isn't hyperbole. It's real -- as real as it gets," he said.

The speech comes the day Supreme Court justices heard oral arguments in a case that seeks to invalidate the landmark health reform law. They will likely take initial votes at their private Friday conference and begin the process of writing opinions, though a decision isn't expected until the first half of 2021.

Vice President-elect Kamala Harris said the case is "a blatant attempt to overturn the will of the people," pointing out that Biden campaigned on protecting Obamacare and won the most popular votes in the history of the United States.

President Donald Trump's administration is looking to undo former President Barack Obama's signature health law. And even with Biden set to take office on January 20, there is little he can do: Even if his administration switches sides and argues in favor of Obamacare, the case will continue because the original lawsuit was brought by a coalition of Republican attorneys general.

Protecting Obamacare was a central theme of Biden's campaign. During the Democratic primary, he argued for expanding the law by adding a "public option" that would allow Americans to buy into a government-run health insurance plan and by beefing up federal premium subsidies that would make Affordable Care Act coverage more affordable. He opposed more progressive rivals' push to scrap private insurance entirely in favor of a single-payer, "Medicare for all"-type system.

Trump's administration and the Republican-led House and Senate failed to repeal Obamacare during Trump's first two years in Congress. Trump and the GOP in late 2017 did enact a tax law that gutted Obamacare's individual mandate by setting the penalty for not having insurance at $0.

Trump's administration later joined the Republican-led states who argued in court that Congress' action rendered the individual mandate unconstitutional, and since it's a linchpin of the Affordable Care Act, the entire law should be invalidated.

Tuesday's speech comes as Biden's transition becomes more contentious, with Trump refusing to concede and making a series of baseless claims that seek to undermine the legitimacy of the election. His administration has not yet taken the legal step necessary to allow the transition process to begin by giving Biden's team access to $6.3 million set aside for the process, as well as access to federal agencies.