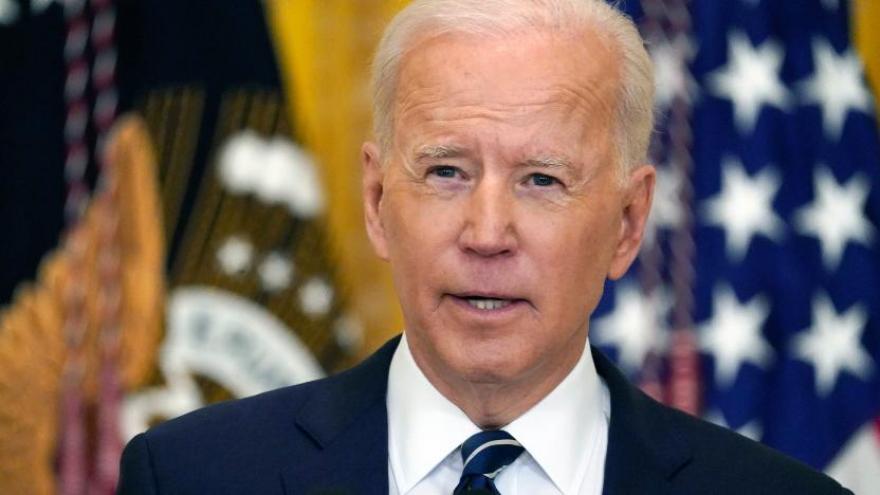 (CNN) -- President Joe Biden on Friday called a sweeping elections bill signed into law in Georgia "Jim Crow in the 21st Century" and "an atrocity" and called on Congress to pass voting rights legislation that would counter restrictions Republicans are trying to push through at the state level across the country.

"Recount after recount and court case after court case upheld the integrity and outcome of a clearly free, fair, and secure democratic process," Biden said in a statement released by the White House, referring to the 2020 election, when he became the first Democratic presidential candidate in nearly three decades to win the state.

Georgia is the first presidential battleground to impose new voting restrictions following Biden's victory in the state, but the bill, which Republican Gov. Brian Kemp signed into law Thursday evening, is part of a national Republican effort to restrict access to the ballot after the 2020 election saw record turnout.

"This is Jim Crow in the 21st Century. It must end," Biden said in the statement, noting how the restrictions disproportionately target Black voters.

Georgia's new law imposes new voter identification requirements for absentee ballots, limits the use of ballot drop boxes, makes it a crime to approach voters in line to give them food and water and gives state officials more power over local elections.

"Instead of celebrating the rights of all Georgians to vote or winning campaigns on the merits of their ideas, Republicans in the state instead rushed through an un-American law to deny people the right to vote. This law, like so many others being pursued by Republicans in statehouses across the country is a blatant attack on the Constitution and good conscience," Biden said.

Shortly after releasing the statement, the President told reporters outside the White House that the Georgia law was "an atrocity."

"If you want any indication that it has nothing to do with fairness, nothing to do with decency -- they passed a law saying you can't provide water for people standing in line while they're waiting to vote," Biden said before boarding Marine One.

Voting rights advocates say the newly-signed bill in Georgia underscores the need for federal legislation to set a national standard for voting rules.

Biden concluded his statement by saying that he will take his "case to the American people -- including Republicans who joined the broadest coalition of voters ever in this past election to put country before party."

"If you have the best ideas, you have nothing to hide. Let the people vote," Biden said.

Georgia has become a pivotal state politically. Besides Biden's victory, two Democrats won runoff elections earlier this year that flipped control of the US Senate.

White House press secretary Jen Psaki spoke out against the law at the White House briefing earlier Friday, saying, "It should not be harder, it should be easier to vote. We should not put limitations in place."

Georgia state Rep. Park Cannon was arrested and removed from the Georgia Capitol on Thursday after passage of the bill. In a video posted to social media, Cannon is seen being led away by several officers with her hands cuffed behind her back.

Psaki said on Friday, "I think anyone who saw that video would have been deeply concerned by the actions that were taken by law enforcement to arrest her when she's simply, by the video that was provided, seemed to be knocking on the door to, to see if she could watch a bill being signed into law."

Biden said in his first White House news conference on Thursday that he would "do everything" in his power to halt efforts to restrict voting rights and described the Republican efforts underway in state legislatures as "un-American."

This story has been updated with additional comments and background.