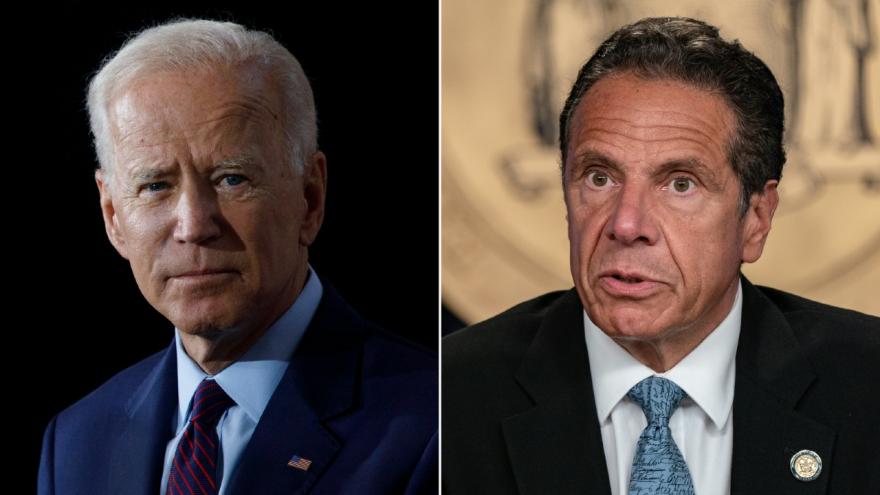 "I think he should resign. I understand that the state legislature may decide to impeach. I don't know that for a fact," Biden said in response to a question from CNN's Kaitlan Collins.

The call from the nation's most powerful Democrat for Cuomo's resignation amounts to one of the most significant rebukes yet for a governor who had been among Biden's political allies up until a series of sexual harassment allegations were made public earlier this year. Biden had said in March that he believed Cuomo should resign if New York Attorney General Letitia James' investigation substantiated the allegations.

The New York attorney general's investigation into sexual harassment allegations found that Cuomo sexually harassed multiple women, James announced Tuesday. The office found that Cuomo harassed current and former state employees, as well as a number of women outside of state government, James said, as the office released a lengthy report on the investigation.

James said Tuesday that her investigation found that Cuomo engaged in "unwelcome and nonconsensual touching," and made comments of a "suggestive" sexual nature. James said that the conduct created a "hostile work environment for women." In a speech made after the report was released, Cuomo denied all the allegations against him.

"I want you to know directly from me that I never touched anyone inappropriately or made inappropriate sexual advances," Cuomo said.

Following the report's release, a series of powerful Democrats in New York and Washington, in addition to Biden, called on Cuomo to resign.

When asked if he believed Cuomo should be impeached, Biden said to "take one thing at a time."

The President was also asked if he condoned Cuomo's office using a photo of him embracing other officials and citizens in the past as part of the governor's defense. During Cuomo's remarks, he played a slideshow of himself physically embracing a myriad of people and a defense brief posted on his website included photos of other politicians hugging or otherwise physically touching people.

Biden said he's sure there are "some embraces that were totally innocent, but apparently the attorney general decided there were things that weren't."

Biden said he had not spoken to Cuomo on Tuesday.

"I don't know that anyone could've watched this morning and not found the allegations to be abhorrent. I know I certainly did," Psaki said when asked about New York Attorney General Letitia James' investigation.

Psaki said there have been no conversations Tuesday between the White House and the governor's office.

She added that the message from the White House to the women who came forward with their accounts is that "all women who have lived through ... this type of experience -- whether it is harassment or abuse or in the worst case, assault -- deserve to have their voices heard, deserve to be treated with respect and with dignity."