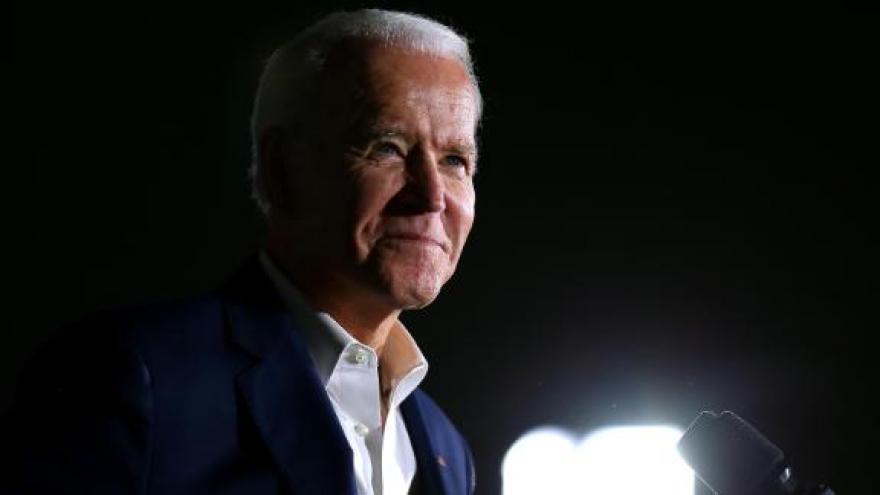 (CNN) -- Campaign staffers are hunkered down at home instead of working from their headquarters or in primary states. Traditional fundraisers, campaign rallies and speeches are replaced with virtual events that have faced technological snafus.

And a candidate with reason to celebrate after a series of wins pushed him closer to securing the Democratic presidential nomination has been sidelined not only from the campaign trail, but also the news cycle.

Just as people across the country are grappling with a new way of life amid the coronavirus pandemic, Joe Biden is also facing the uncertainty arising from the global health crisis with his team forced to adjust to a new reality of campaigning.

From his home in Wilmington, Delaware, Biden told reporters on a call Friday that his campaign had hired a professional team to set up the ability to broadcast live on television networks from there -- potentially with the small group of reporters that travels with his campaign present. He said he aims to be up and running by Monday, holding regular briefings on the response to the coronavirus pandemic and answering questions from reporters.

"Hopefully by Monday, we're going to be in a very different place in terms of being able to be in communication with all of you," Biden said. "I promise you're going to be hearing more of me than you want, probably."

It's part of a slew of changes Biden's campaign is making as it attempts to close out a primary race against Vermont Sen. Bernie Sanders and transition to a general election showdown with President Donald Trump in the midst of unprecedented circumstances.

For Biden personally, the pandemic has forced a drastic change in focus.

"I find myself literally on the phone with my key advisers, medical advisers and economic advisers literally four, five hours a day, going through detailed memoranda on what we should be doing," Biden said Friday.

"My whole focus has basically been how we deal with this crisis, and quite frankly, thus far it's been less about how we campaign or make stark differences between the President and I," he said. "I think some are just self-evident."

For his campaign -- which was in the process of building out his senior staff for the general election before it had to order everyone in his Philadelphia headquarters and in regional field offices to work from home -- the changes are tactical.

Aides say one major focus for Biden's team in the coming weeks is beefing up its digital footprint, including organizing, fundraising, advertising and video production, as the campaign prepares to turn to an online format to relay its message and draw in voters.

Biden's campaign is looking for ways to leverage the former vice president's skills as a one-on-one retail politician in an environment in which he's not able to meet people or shake hands.

He's already done virtual events -- an online town hall on video that was derailed by tech challenges and a telephone town hall with several participants able to ask Biden questions. But his campaign is looking for more individualized ways for Biden to connect with voters, supporters and donors.

In a fundraising email Friday, his campaign told small-dollar donors that Biden would FaceTime some of the people who contributed -- a tactic a former rival, Massachusetts Sen. Elizabeth Warren, often used that sparked social media attention.

The campaign is also considering virtual ropelines, where people could wait in front of their phones or laptops to interact one-on-one with Biden on video, said Rob Flaherty, Biden's digital director.

"We're really focused on, 'OK, how does somebody actually have an opportunity to interact with the vice president?'" Flaherty said. "We're going to be playing with a bunch of different formats to see what sticks in the space of making sure the VP gets those interactions."

More broadly, Flaherty said, Biden's campaign is looking for new ways to build a sense of community among Biden's supporters -- with each other and with his campaign. It's the kind of digital work that he would have needed regardless to take place as Biden shifts his focus to Trump and builds for the general election -- but now needs to happen on an accelerated timeline.

The campaign's view of the role the former vice president can play is informed in part by the audience a 3-minute, 21-second video of him explaining the Iran crisis in early January had drawn. The off-the-cuff riff is Biden's fifth-most watched video on Facebook -- and Flaherty said it showed people looked to Biden as an expert who could explain what was happening in Washington and why it mattered.

Now, Biden aides are considering podcasts and long-form videos among possible ways to reach people who are now at home and online.

"People are like, 'OK, all this stuff's going on in Washington,' and they view the VP as this kind of voice of reason -- calm and understanding," Flaherty said. "There's a political benefit to that, which is why people want him to be president right now. But at the same time, that's a service. The country is looking for somebody like that."

The team is also looking to expand its already existing digital organizing program, aides say, to equip supporters and volunteers with tools to conduct phone banking and send text messages from their homes as traditional field organizing has ground to a halt.

The campaign is holding off on airing new television advertisements, instead focusing on digital ads until the primary calendar is more settled, as many states have put off their contests due to concerns over the coronavirus.

An ad Biden's campaign began airing on Facebook and Instagram this week, targeting voters in Wisconsin, could be a model for future ads. The minute-long video features Biden delivering an uplifting message focused on responding to the coronavirus crisis in his closing statement from Sunday night's Democratic debate on CNN, and weaves in stories from local news reports of Americans helping each other.

After seeing an uptick in its online contributions earlier this month, Biden has continued his requests for money from small dollar online donors, though aides acknowledge the requests are coming at a time of economic uncertainty for many in this country. The campaign has committed to holding virtual fundraisers in lieu of its in-person money events, with its first on Friday.

The Biden campaign has changed its fundraising policy to begin collecting money for the general election, two sources said. But there could be challenges to bringing in the high dollar campaign contributions on which his campaign has relied for most of this primary cycle. One Biden bundler said he put his typical fundraising emails to his donor network on hold as the financial impact of coronavirus is top of mind for many Americans.

Another bundler expressed concern about whether the limitations in place due to coronavirus could affect fundraising in the long term as the campaign begins to pivot to the general election. If Biden secures the Democratic nomination, he would be able to raise money through joint committees with the Democratic National Committee, a type of fundraising that includes in person events that can draw large checks from donors.

"The DNC certainly has been reasonably successful, but once you have the nominee your fundraising should increase ten or twenty fold, and they kind of wait for that to happen," the bundler said.

A strategist connected to the pro-Joe Biden super PAC Unite the Country says it received a $25,000 check Thursday and a $100,000 check Wednesday -- and that so far, the super PAC hasn't seen any donors back away from commitments amid the coronavirus pandemic.

The source said Democrats connected to the super PAC had all planned to travel to meet donors this week, and that "that obviously didn't happen."

"We're adapting the same way everyone else is, and I'm not at the point yet where I fear that money is not coming in or donors are not answering our calls," the source said.

"We need to compete with the war chest that Donald Trump, the RNC, and their right-wing allies have amassed, and this will go a long way in ensuring that we can fund the grassroots efforts in key battleground states that will be necessary to win this November," said Kate Bedingfield, deputy campaign manager and communications director for Joe Biden.

Getting ready for the general

The former vice president has yet to secure the nomination as Sanders remains in the race and assesses the state of his campaign. Biden's team has not directly called for Sanders to drop his presidential bid, with aides publicly saying it's a decision for the Vermont senator to make. But they've clearly outlined their case that Sanders' path to the nomination is virtually non-existent at this point.

"Biden's delegate pathway to the Democratic nomination is increasingly clear," Bedingfield wrote in a campaign memo after Biden's sweep in this week's primary contests. "In order to close the delegate deficit he faces, Senator Sanders would need to win every remaining contest by roughly 40 points."

With the nomination within reach, Biden's campaign will need to build a general election strategy, including bulking up its staff, setting up infrastructures in battleground states, and structuring its messaging, in unprecedented times as it prepares to face off against Trump.

The campaign is also planning for a "vigorous vetting process" for selecting Biden's running mate after he committed to adding a woman to the Democratic ticket, a campaign aide said. The campaign has declined to detail what this process will look like or when it will formally begin, but the former vice president and some close to him are keenly aware of what the process entails, having undergone it themselves when Biden joined the Democratic ticket in 2008.

Much of the campaign's messaging recently has focused on coronavirus, an issue that is top of mind for millions across the country at this time. Biden and his campaign have responded in real-time to President Trump's handling of the crisis, detailed its own plans for responding to the pandemic, and assembled a team of public health experts to advise the former vice president. The crisis has given the former vice president a chance to reinforce his message he could step into the Oval Office on day one ready to lead.

Delaware Sen. Chris Coons pointed to Biden's compassion and empathy and his longtime experience in government, including work implementing the Obama administration's Recovery Act, as emblematic of a leader equipped to handle a crisis like the coronavirus.

"Who Joe is and what his lifetime of public service has been about meets this moment," Coons said. "Joe understands how to connect with and care for and fight for people who are being hurt. We are about to go through a really tough period where lots of people are nervous and anxious, and they want to see a federal response that is compassionate, effective and well led."

"Having a crisis like this will focus the attention of the American people on who has the experience to lead us through challenges and who has the values that we want to see," he added.