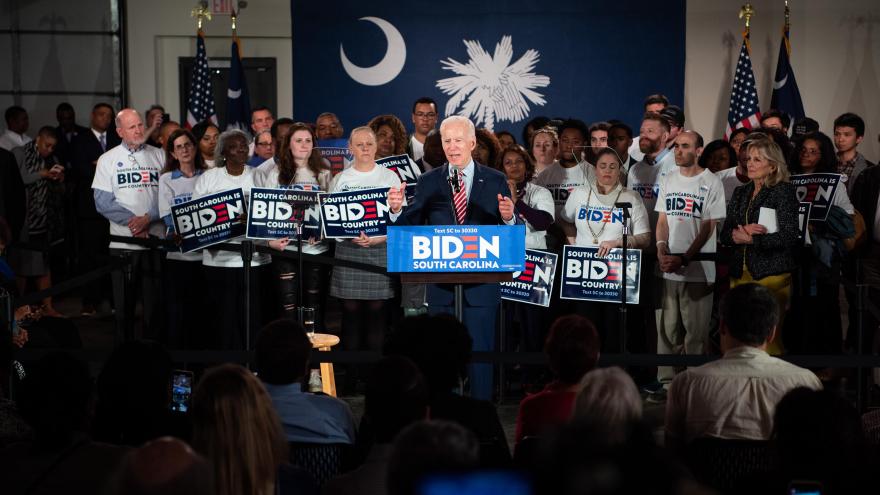 (CNN) -- Joe Biden's campaign is redeploying significant resources this week to Nevada and South Carolina, placing a heavier concentration in the states as the former vice president tries to regain his footing in the 2020 race following a pair of disappointing finishes in the first two early nominating contests, CNN has learned.

A Biden campaign official tells CNN the campaign will redeploy nearly 50 additional staffers to Nevada and South Carolina by this weekend, with some of those staffers being sent from their operations in Super Tuesday states.

The redeployment will bring the total number of staff on the ground in Nevada to more than 130 and more than 60 in South Carolina.

The campaign official said there is a plan to quickly get those staffers back to Super Tuesday states when those nominating contests are complete.

The Biden campaign views the redeployment as a strategic investment in states they believe will provide Biden with a path to the nomination and ones they argue are more reflective of the Democratic Party.

"As Vice President Biden has made clear, we have yet to hear from the most committed constituencies in the Democratic Party -- people of color -- and Nevada and South Carolina are the first opportunities for that to happen," said TJ Ducklo, a spokesman for Biden. "The strategic and most effective use of our team is to focus their energy and talents in these two states that reflect the base of the Democratic Party and Joe Biden's strengths."

The move comes after Biden sustained poor finishes in Iowa, where he placed fourth, and New Hampshire, where he came in fifth place. Biden has described South Carolina as his "firewall," and he and his campaign have argued the former vice president will fare better when voting gets down to more diverse states like Nevada and South Carolina.

"We need to hear from Nevada, South Carolina and Super Tuesday states and beyond," Biden told supporters at a rally in South Carolina on the night of the New Hampshire primary. "Up until now, we haven't heard from the most committed constituency in the Democratic Party -- the African American community -- and the fastest growing segment of society, the Latino community."

The former vice president returns to Nevada on Friday ahead of the state's caucuses there on February 22.