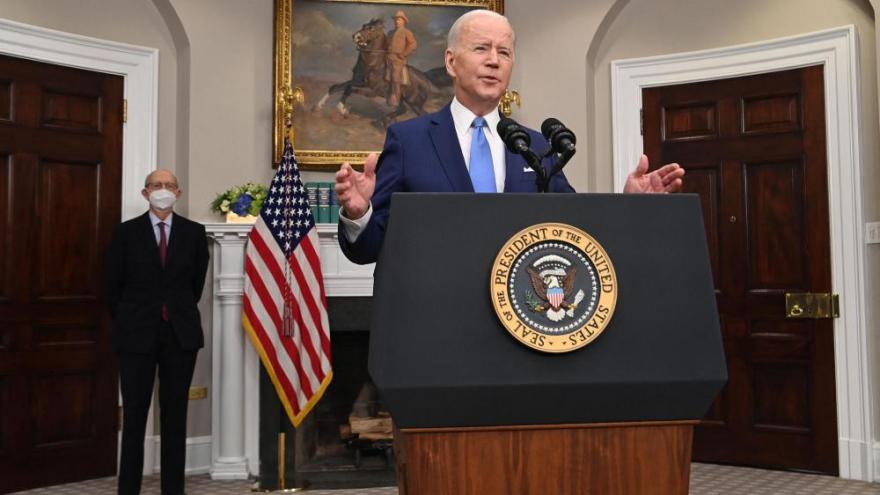 "The person I will nominate will be someone with extraordinary qualifications, character, experience and integrity. And that person will be the first Black woman ever nominated to the United States Supreme Court," Biden said. "It's long overdue in my view. I made that commitment during the campaign for president, and I will keep that commitment."

Biden added that he expects to choose a nominee before the end of February, noting, "I have made no choice at this point."

In remarks from the White House, Biden -- with Breyer by his side -- said the justice's retirement marked a "bittersweet day for me."

"I'm here today to express the nation's gratitude to Justice Stephen Breyer for his remarkable career in public service and his clear-eyed commitment to making our nation's laws work for its people," Biden said.

"I enormously appreciate the privilege of serving as part of the federal judicial system -- nearly 14 years as a Court of Appeals Judge and nearly 28 years as a Member of the Supreme Court," he said and added that the work has been "challenging and meaningful."

He said that his relations "with each of my colleagues have been warm and friendly" and that he has been aware "throughout" of the "great honor of participating as a judge in the effort to maintain our Constitution and the rule of law."

The letter was dated January 27.

Breyer's retirement gives Biden the opportunity to nominate his first Supreme Court justice and reinforce the high court's liberal minority. The nomination will be one of the most consequential choices of Biden's presidency, and may offer him a political lifeline ahead of the 2022 midterm elections.

Breyer informed the White House of his decision to retire last week, two sources familiar with the conversation told CNN. Breyer, who is 83, has faced intense pressure from the left to retire while Democrats have a clear path to confirm his replacement.

Biden's pick to replace Breyer is expected be a younger liberal judge who could serve on the court for decades. The confirmation would not alter the Supreme Court's ideological balance -- the court has six conservative justices appointed by Republican presidents and three liberals appointed by Democrats.

But the confirmation of a liberal justice would be a major win for Democrats and could give the party a much-needed boost ahead of the November midterms. Biden's approval ratings have slipped significantly in recent months and Democrats are bracing for the possibility that Republicans will take control of Congress.

Biden said on the 2020 campaign trail he intended to make history by nominating the first Black woman to serve on the Supreme Court. White House press secretary Jen Psaki told reporters Wednesday that Biden "certainly stands by" the promise.

Senate Majority Leader Chuck Schumer on Wednesday vowed that whoever Biden nominates for the court will be confirmed with "all deliberate speed." Biden will have to nominate someone who can safely get 50 votes in the Senate, as Democrats currently hold only the most narrow of majorities in the chamber. The President hopes a swift process will lead to aconfirmed justice by spring.

Well before Breyer's retirement plans became public, a short list of potential nominees had been circulating Washington and officials in the White House Counsel's Office have built files on various candidates in anticipation of a potential vacancy.

Biden first made the commitment to nominate a Black woman to the Supreme Court in South Carolina -- a key battleground state where Black voters make up a sizable portion of the electorate. The pledge helped Biden secure key endorsements, including from House Majority Whip James Clyburn, a South Carolina Democrat. Clyburn's endorsement is largely credited with giving Biden's struggling campaign the boost it needed to win the South Carolina primary, which put him on the path to win the Democratic nomination.