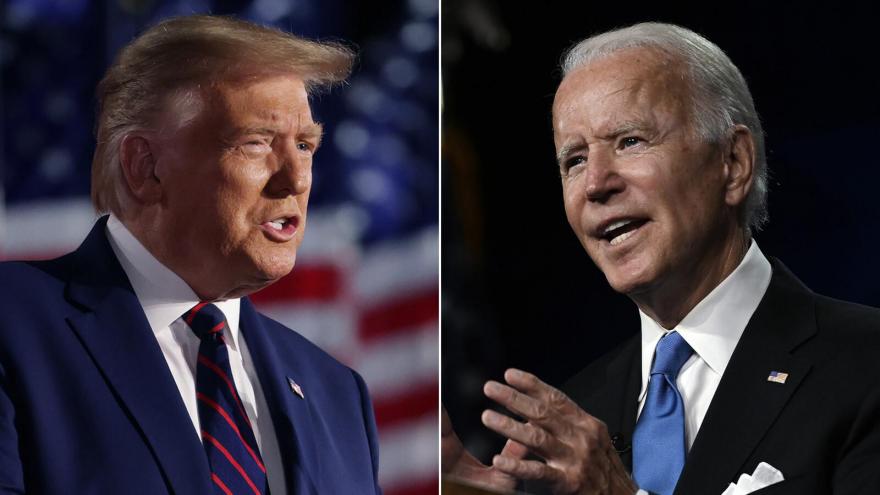 Democratic presidential nominee Joe Biden plans to blame President Donald Trump for civic violence and racial unrest in a speech in Pittsburgh as he begins to travel to swing states two months before the election.

"Do you really feel safer under Donald Trump?" Biden asked repeatedly in a speech in Pittsburgh.

The speech opened a new phase of the 2020 election, with both parties' national conventions now completed and Biden beginning to travel to swing states. In his first major campaign event after last week's Republican convention, the former vice president delivered a forceful response to Trump and his allies' racially charged claims that the looting and property damage that has taken place amid protests over racial injustice in some cities would spread to the suburbs if Biden is elected in November.

Biden condemned violence and destruction, calling it an affront to the tactics of civil rights leaders like Martin Luther King Jr. and John Lewis.

Responding to Trump's claims that the suburbs, where Trump needs to win back White voters who have abandoned the GOP in droves on his watch, would not be safe if Biden wins, Biden asked, incredulously: "You know me. You know my heart. You know my story, my family's story. Ask yourself: Do I look like a radical socialist with a soft spot for rioters? Really?"

He also condemned Trump, whose armed supporters have been involved in violent clashes with protesters, saying his refusal to call on his own supporters to "stop acting as an armed militia in this country shows how weak he is."

Biden then challenged Trump much more directly than he had in his speech on the final night of the Democratic convention, where he didn't use Trump's name. On Monday, he said the President will "do anything to hold onto political power."

"Donald Trump has been a toxic presence in our nation for four years," Biden said. "Will we rid ourselves of this toxin? Or will we make it a permanent part of our nation's character?"

He cast Trump's "law and order" message as designed to instill fear, and said Trump is ignoring the reality that "he is President, whether he knows it or not."

Biden called Trump's "subservient role" to Russian President Vladimir Putin humiliating and embarrassing, and lambasted Trump over reports that Russian operatives had offered bounties to the Taliban to kill US soldiers.

"Not even American troops can feel safer under President Trump," Biden said.

Biden also defended his own political record, pointing to the efforts of former President Barack Obama's administration to stave off a depression during the 2009 economic collapse. He also said GOP characterizations of him as damaging to energy jobs in areas like western Pennsylvania are false.

And, directly addressing racial unrest, Biden cast himself as a bridge between peaceful protesters who object to police violence that disproportionately affects Black Americans and local elected officials and law enforcement.

"I'm confident I can bring the police to the table, as well," Biden said.

The speech comes at a fraught moment, ahead of Trump's Tuesday trip -- against the wishes of Wisconsin's Democratic governor, Tony Evers -- to Kenosha, a city wracked with violence following the police shooting of a 29-year-old Black man, Jacob Blake, the property damage and looting that followed, and the killing of two protesters there.

Trump and the Republican Party last week closed a convention focused on the theme of "law and order," painting a deeply distorted picture of cities subsumed by street violence that would soon spread to the suburbs, where he needs to rebuild his standing with White voters in order to defeat Biden, if he does not win reelection.

The political landscape in the wake of both parties' conventions is murky, though polls this week could make clear whether Biden or Trump received a substantial boost exiting the conventions and whether their content changed the way Americans view issues such as police brutality, protests and civic violence.

Trump appears to be inciting unrest on Twitter, such as praising a convoy of supporters heading into restive Portland, Oregon, as "Great Patriots." He also "liked" a Twitter post encouraging people to read a thread of tweets that in part praised Kyle Rittenhouse, a 17-year-old charged with allegedly killing two protestors in Kenosha.

Biden's return to the trail also comes after months in which he has seldom traveled outside the Delaware and Philadelphia areas, with the pandemic leading his campaign's health advisers to conclude that doing so wasn't feasible.

He said he plans to resume swing state travel soon, telling supporters at a recent virtual fundraiser that Wisconsin, Pennsylvania, Arizona and Minnesota are states where visits are in the works.

His wife, Jill Biden, plans on Tuesday to kick off what the campaign is calling a "back-to-school" combination of virtual and in-person events in eight states -- Michigan, Wisconsin, North Carolina, Florida, Nevada, Minnesota, Arizona and Pennsylvania -- that are all 2020 election battlegrounds, though it's not yet clear how many of those states she will visit in person.

This story has been updated with more from Biden's remarks.