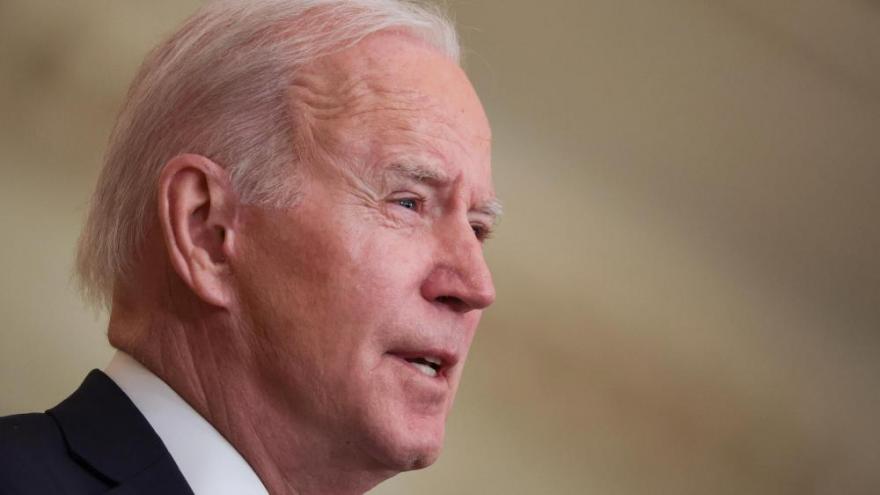 The US and allies are planning on Thursday to trigger the "full scale" of the sanctions that have been discussed over the last several weeks in response to the attack, according to a senior Biden administration official.

"President Putin has chosen a premeditated war that will bring a catastrophic loss of life and human suffering," Biden said. "Russia alone is responsible for the death and destruction this attack will bring, and the United States and its Allies and partners will respond in a united and decisive way. The world will hold Russia accountable."

The White House statement came in response to explosions across Ukraine, including in the capital of Kyiv. Shortly before the explosions began, Russian President Vladmir Putin announced a "special military operation" and called for Ukraine's "demilitarization" in televised remarks.

An adviser for the interior minister of Ukraine, Anton Gerashchenko, said Russia's "invasion has begun" with "missile strikes on Kyiv," in an official WhatsApp group with journalists.

The early assessment from the US is that this is the start of the full Russian invasion, according to a senior US official familiar with the latest US intelligence. The source said the belief is that the explosions heard near Kyiv and Odessa are likely missiles, while those around Kharkiv in eastern Ukraine are likely artillery, given the proximity to the border.

Biden also spoke by phone with Ukrainian President Volodymyr Zelensky. In a statement on the call, Biden said he briefed Zelensky "on the steps we are taking to rally international condemnation, including tonight at the United Nations Security Council."

"He asked me to call on the leaders of the world to speak out clearly against President Putin's flagrant aggression, and to stand with the people of Ukraine," Biden said.

In an address Thursday morning in Ukraine, Zelensky said he was introducing martial law across the country and urged Ukrainians to remain calm.

"No panic. We are strong. We are ready for everything," he said. "We will win over everybody because we are Ukraine."

Biden said that he planned to speak to his G-7 counterparts and would give a speech to the American people on Thursday. He said he intended to announce "further consequences" that the US and its allies planned to impose on Russia over "this needless act of aggression against Ukraine and global peace and security."

"We will also coordinate with our NATO Allies to ensure a strong, united response that deters any aggression against the Alliance," Biden said.

While the administration official declined to lay out specifics, the US has planned to target Russia's two largest banks, as well as other financial firms, and has prepared to deploy export controls to cut off Russian access to critical Western technology for entire Russian economic sectors.

Additional members of Putin's inner circle and their families are also likely to be targeted.

Discussions were ongoing late Wednesday evening between US and European officials about the final shape of the package, the official said. It will also be a topic of discussion at the virtual G-7 meeting that has been scheduled, the official said.

US officials remain on high alert for any cyber activity against key domestic targets including banks and critical infrastructure, the official said.

Biden's national security team plans to brief the House and Senate in separate, unclassified phone calls Thursday on the situation in Ukraine. Lawmakers from both parties roundly condemned Russia's actions in statements Wednesday and called for the US to ramp up sanctions against Moscow.

The UN Security Council held an emergency meeting on Wednesday evening in New York -- offering a remarkable split screen as the diplomats delivered speeches at the same time Putin's speech aired on Russian television and the explosions began in Ukraine. Ukraine's Ambassador to the United Nations

"About 48 minutes ago, your President declared war on Ukraine," Kyslytsya said. "You declared the war. It is the responsibility of this body to stop the war."

US Ambassador to the UN Linda Thomas-Greenfield spoke for a second time as the UN meeting was nearing an end, stating Putin had "delivered a message of war" while the Security Council was meeting. She said the US would introduce a resolution in the UN on Thursday.

"At the exact time as we are gathered in the Council seeking peace, Putin delivered a message of war in total disdain for the responsibility of this council," Thomas-Greenfield said.

As the final speaker of the meeting, Kyslytsya turned his attention again to Russia's UN ambassador, Vasily Nebenzya, who was acting as president of the Security Council.

"I welcome the decision of some members of this council to meet as soon as possible to consider the necessary decision that would condemn the aggression that you launch on my people," Kyslytsya said. "There is no purgatory for war criminals. They go straight to hell, Ambassador."

Nebenzya shot back by claiming Moscow wasn't being aggressive against the Ukrainian people but against the "junta" in power in Kyiv, before hastily gaveling an end to the UN meeting.

CORRECTION: This story has been updated to correctly identify the Ukrainian ambassador to the UN.