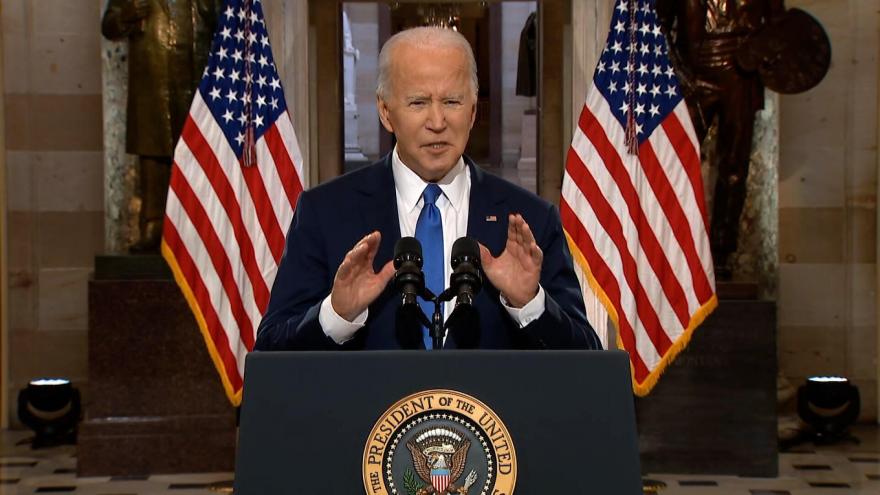 President Joe Biden reflected on the moment following his remarks in Statuary Hall, telling reporters in the Capitol that he did not name former President Donald Trump during his address because he did “not want to turn it into a contemporary political battle.”

(CNN) -- President Joe Biden on Thursday marked the first anniversary of the January 6 insurrection by forcefully calling out former President Donald Trump for attempting to undo American democracy, saying such an insurrection must never happen again.

Biden vowed to defend the nation's founding ideals from the threats posed by the violent mob that stormed the Capitol one year ago and the prevailing lies that Trump and his allies continue to repeat about the 2020 election. An animated Biden made one of the most passionate addresses of his still-young presidency as he harkened back to critical moments from the nation's past, casting the assault as a living symbol of the inflection point in American history he so often speaks about.

"For the first time in our history, a President had not just lost an election. He tried to prevent the peaceful transfer of power as a violent mob reached the Capitol," Biden said in a speech from the US Capitol that lasted just under 30 minutes. "But they failed. They failed. And on this day of remembrance, we must make sure that such an attack never, never happens again."

In a direct shot at Trump, Biden added, "His bruised ego matters more to him than our democracy or our Constitution, he can't accept he lost."

Biden has typically avoided speaking directly about his predecessor since taking office, and pointedly did not say his name on Thursday -- instead making more than a dozen references to "the former President."

But the President's blistering speech nonetheless confronted Trump's election lies and post-presidency behavior, accusing him of spreading falsehoods about the 2020 election, refusing to accept defeat and holding him accountable for inciting a violent mob of his supporters to storm the US Capitol.

"A former President of the United States of America has created and spread a web of lies about the 2020 election. He's done so because he values power over principle, because he sees his own interest as more important than his country's interest and America's interest," Biden said.

Biden again emphasized the core message of his 2020 presidential campaign and the reason why he ran against Trump: "We are in a battle for the soul of America."

The President warned democracy and the "promise of America" is at risk and called on the American public to "stand for the rule of law, to preserve the flame of democracy."

He called for protecting voting rights across the nation and blasted Trump and his supporters for attempting to "suppress your vote and subvert our elections."

"It's wrong. It's undemocratic. And frankly it's un-American," Biden said.

His comments come as Democrats make a renewed push to get two voting rights bills -- the John Lewis Voting Rights Advancement Act and the Freedom to Vote Act -- passed in the Senate. The two pieces of legislation were introduced in response to Republicans enacting laws across the country making it harder for people to vote following record turnout in the 2020 election. Virtually every Republican in Congress opposes the legislation and it is unclear whether Democrats will be able to pass the bills.

"Now let's step up, write the next chapter in American history, for January 6 marks not the end of democracy, but the beginning of a renaissance of liberty and fair play," Biden said.

After his speech, Biden defended calling out Trump in such a direct way when asked by a reporter if he believed going after the former President would "divide more than it heals."

The President responded: "The way you have to heal, you have to recognize the extent of the wound. You can't pretend. This is serious stuff."

"You've got to face it. That's what great nations do. They face the truth, deal with it and move on," Biden said.

A day of remembrance

The events of January 6, 2021, led to Trump's second impeachment by the House of Representatives. The insurrection launched the largest investigation in FBI history, with 700 people arrested and hundreds more offenders still at large. And a House select committee continues to investigate the events leading up to the riots. Two Trump allies -- Mark Meadows and Steve Bannon -- have been held in criminal contempt for declining to cooperate with committee investigators after being subpoenaed.

On Capitol Hill, a series of events organized by House Speaker Nancy Pelosi will take place following Biden's speech to mark the January 6 anniversary, including a moment of silence on the House floor and testimonials from lawmakers about the harrowing attack.

The events of the insurrection took place just two weeks before Biden's inauguration, casting a shadow on the new President's administration. And despite the slew of tossed out court cases, failed state election audits and countless debunked conspiracy claims, many Trump supporters have continued to doubt the legitimacy of Biden's presidency.

In his remarks, Biden said he did not ask to be president at a time when America's founding principles were under attack, but he was up for the fight.

"I will stand in this breach. I will defend this nation. And I will allow no one to place a dagger at the throat of democracy," Biden said.

The President also praised the police officers who stood against the attack for upholding the nation's way of life.

"One year ago today in this sacred place, democracy was attacked -- simply attacked. The will of the people was under assault, the Constitution -- our Constitution -- faced the gravest of threats. Outnumbered in the face of a brutal attack, the Capitol police, the DC Metropolitan Police Department, the National Guard and other brave law enforcement officials saved the rule of law. Our democracy held. We the people endured. We the people prevailed.

Vice President Kamala Harris spoke before Biden, saying: "On January 6, we all saw what our nation would look like if the forces who seek to dismantle our democracy are successful: The lawlessness, the violence, the chaos."

"When I meet with young people, they often ask about the state of our democracy. About January 6. What I tell them is: January 6 reflects the dual nature of democracy. Its fragility and its strength," Harris added. "You see, the strength of democracy is the rule of law."

While Trump was expected to hold a news conference scheduled for the anniversary of the insurrection, it was abruptly canceled. Allies had warned it would cause unnecessary problems for Republicans and himself.

Instead of his news conference on Thursday, Trump is expected to air his grievances at a campaign-style rally in Arizona next week.

Lawmakers and historians to commemorate anniversary

At the end of December, Pelosi announced a slate of events at the Capitol to mark the passage of a year since the deadly attack.

In a letter to Democrats, Pelosi wrote that the events "are intended as an observance of reflection, remembrance and recommitment, in a spirit of unity, patriotism and prayerfulness."

At noon, there will be a prayer and a moment of silence on the House floor. Then a moderated conversation will take place featuring historians Doris Kearns Goodwin and Jon Meacham. Pelosi's letter said that the discussion will serve "to establish and preserve the narrative of January 6."

Afterward, lawmakers will have time to provide testimonials to "share their reflections of the day." Colorado Democratic Rep. Jason Crow will preside over the testimonials. Crow was one of the lawmakers trapped inside the House chamber during the attack and was famously pictured crouched down in aid to a colleague who appeared to be in distress.

"Trauma, any trauma, impacts everybody," Crow, a former Army Ranger, told CNN not long after the attack. "Nobody is immune to it and everybody responds to it differently."

Later, a prayer vigil will be held on the center steps of the Capitol where House and Senate lawmakers can participate.

While congressional Democrats have put together a full day of events to bring attention to what happened during the insurrection, congressional Republicans, in contrast, have seemed reluctant to talk much about it and especially reluctant to address Trump's role.

In a letter to House Republicans at the start of the new year, House GOP leader Kevin McCarthy briefly mentioned the January 6 anniversary, but did not include any mention of the former President.

"The actions of that day were lawless and as wrong as wrong can be. Our Capitol should never be compromised and those who broke the law deserve to face legal repercussions and full accountability," he wrote.

McCarthy then pivoted to criticizing Democrats.

"Unfortunately, one year later, the majority party seems no closer to answering the central question of how the Capitol was left so unprepared and what must be done to ensure it never happens again. Instead, they are using it as a partisan political weapon to further divide our country," he said.

GOP leaders won't be in the Capitol on Thursday with the House out of session and a number of Republican senators heading to Georgia to attend a memorial service for the late Sen. Johnny Isakson.