Biden crafts inaugural address to unify a country in crisis 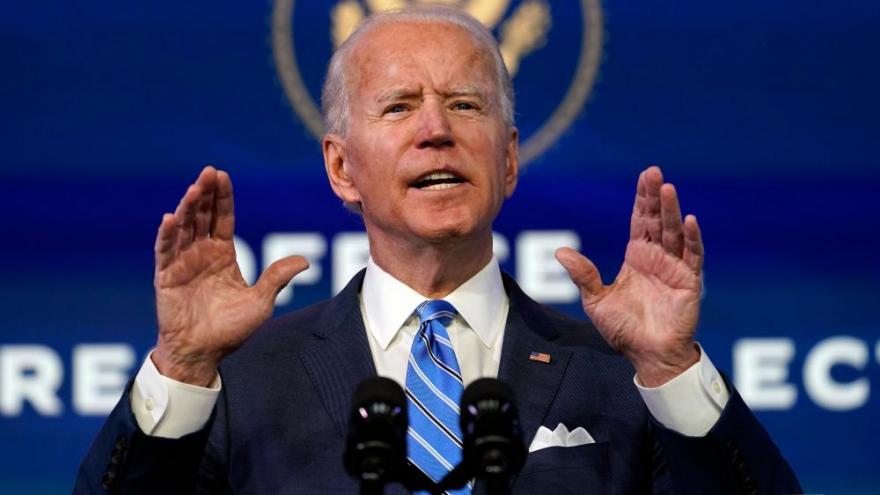 President-elect Joe Biden crafts an inaugural address to unify a country in crisis. In this image, Biden speaks during an event at the Queen theater, Thursday, January 14th, in Wilmington, Delaware.

(CNN) -- President-elect Joe Biden has spoken volumes inside the US Capitol over more than four decades, but the weight of those words does not approach the magnitude of the message he will deliver on its steps during his inaugural address Wednesday.

Biden has been steadily crafting the speech -- adding a thought here, inserting a line there -- since the day after he delivered a victory address in Wilmington, Delaware, aides say. But in those passing 72 days, Biden's burden has grown even heavier, with President Donald Trump's relentless falsehoods complicating the already-challenging task of unifying a divided nation.

Mike Donilon, a longtime adviser to Biden who will join him in the West Wing, is overseeing the speechwriting process along with Vinay Reddy, Biden's chief speechwriter. Jon Meacham, the historian and presidential biographer, is also helping shape the inaugural address, which will be delivered as the opening mark of perhaps the most challenging presidency since Franklin Roosevelt.

It is expected to be about 20 minutes in length, aides said, which follows a pattern of inaugural addresses from recent presidents. Four years ago, Trump spoke for 15 minutes, while Barack Obama's speech in 2009 was about 18 minutes.

For the first time in modern history, the new president's successor will not be sitting within arm's reach on the west front of the Capitol. By the time Biden takes his oath of office, Trump is scheduled to have arrived at his home in Florida. Aides say Biden is unlikely to mention -- or certainly not dwell on -- Trump, but could give an appreciative nod at Vice President Mike Pence, who plans to attend.

The exact text is a closely guarded secret, advisers tell CNN. Not only because he wants the message to be fresh, but also because the speech has changed multiple times -- out of necessity, given the horrific siege of the Capitol on January 6, and also because of Biden's penchant for rewriting speeches until the very last minute.

But several people close to Biden say clues to his address can be found in themes from his speech on November 7, 2020, when he implored Americans: "Let's give each other a chance."

Those words now strike almost an ominous tone, with their mission even more difficult after a pro-Trump mob attempting to stop Congress from accepting the electoral votes overtook the Capitol steps where Biden will deliver his first message to the nation as president. The events of the past two weeks underscore the reality that the 78-year-old Biden -- who will on Wednesday stand on the steps of a building in which he has spoken countless words during a 36-year-run as a loquacious senator and eight more as vice president -- is delivering remarks that will carry more weight than a lifetime's worth of his speeches.

"Despite all that's happened, despite all that the country has endured, his message never strayed from restoring the soul of the nation," a top Biden adviser told CNN. "That is his mission statement as much as ever."

Jon Favreau, the former chief speechwriter for President Barack Obama, said Biden's task with his speech "will be easier because of who he is and who he's following."

"We're in the midst of a national trauma that's tested our faith in everything good we've ever believed about this country, and the guy who was supposed to be helping us through it made the crisis infinitely worse," Favreau told CNN. "No inaugural address, however well-written or delivered, can heal that collective wound. But Joe Biden is someone who's held on to his faith and optimism despite enduring more tragedy than most, which makes him uniquely positioned to ask the country to do the same."

Favreau, who worked with Obama to craft both inaugural addresses, said Biden's speech was not the place to offer a detailed policy agenda. That message, he said, will come during Biden's first address to a joint session of Congress in February.

"I'd use the inaugural to lift people's spirits," Favreau said, "and remind them why the American experiment is worth saving."

Biden aides have been reluctant to preview specifics of Biden's inaugural address. Ron Klain, his incoming chief of staff, told The Washington Post in a video interview last week that Biden "takes time every few days to sit down and think about it and write some thoughts and rewrite some thoughts."

During a fundraiser Friday evening, Biden said he is heading into what "may be the most unusual inaugural in American history."

"Maybe not the most consequential, but the most unusual," he said.

Biden told supporters that while his inauguration, due to the coronavirus pandemic, would not look like previous inaugurations, it would be "an event that the American people will be proud of."

When Biden looks into the cameras shortly after noon on Wednesday, he will be addressing a country in the throes of multiple overlapping crises. Nearly 4,000 Americans are dying every day from the coronavirus and many more are out of work, hungry and at risk of losing their homes.

The closest parallel to the situation Biden is inheriting came in 1933, when President Franklin Delano Roosevelt took office during the Great Depression and a rising tide of global authoritarianism. But even then, Roosevelt had some advantages that Biden will not enjoy, historians say.

"The idea of giving a speech that unifies the country, or giving a speech that everyone hears the same way, even if they don't agree with what he's saying, that's just not our world anymore," said historian Julian Zelizer, a professor at Princeton University and CNN contributor. "It's one thing to call for unity and inspire people to come together when there's a common frame through which everyone is listening to you, but if it's all divided, fragmented, polarized, it's very hard to convey any kind of message like that."

Roosevelt in his first inaugural delivered one of his most famous lines, telling Americans that "the only thing we have to fear is fear itself." But the speech was also deeply political. Roosevelt called on the Congress to grant him "broad executive power to wage a war against the emergency, as great as the power that would be given to me if we were in fact invaded by a foreign foe."

Biden has been cautious in his talk about executive authority, but in his remarks last week outlining the Covid-19 relief package that will be his first legislative effort to stem the ongoing disaster, he too called on partisans to set aside their sharpest tools and unite in the face of existential threats.

His challenge on Wednesday, Zelizer said, was not in convincing legislators or whipping votes, but in restoring Americans' confidence that he and the government he will lead understands their suffering.

"I don't think he'll necessarily inspire through kind of the high rhetoric that FDR was able to achieve, or even some other presidents like Reagan or Lyndon Johnson or Kennedy," Zelizer said. "He'll inspire by just giving people a sense that the adult is finally in the room, and an adult who cares about what we're all going through as a country. He can deliver that, but it's going to be tough."

This story has been updated with additional reporting on Biden's speech.